Thinking she had already won the gold medal, Yelena Lashmanova came to almost a complete stop.

Inside the stadium with one lap to go in the women's 20-kilometer walk, Lashmanova briefly paused but soon got moving again and held on to first place to lead a Russian 1-2 on Tuesday at the world championships.

"The judges didn't really explain to us that we should do one lap before the home straight and finish, and that is why I stopped," said Lashmanova, the London Olympic champion and world record holder. "But I quickly understood I should keep going." 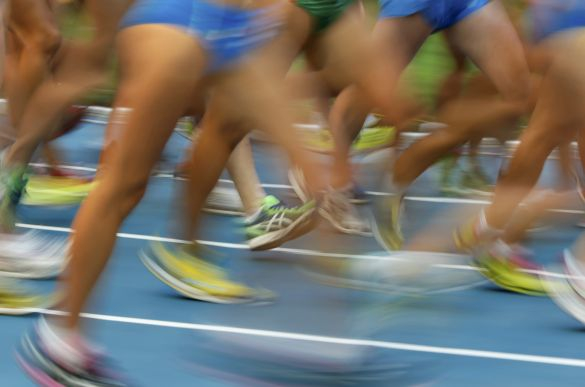 Athletes competing in the women’s 20 kilometer race walk at Luzhniki.

Lashmanova held off teammate Anisya Kirdyapkina with a final burst of speed to give Russia a sweep of the gold medals in the 20K events after Alexander Ivanov won the men's race.

After dominating the walk through Moscow's morning heat, Lashmanova entered Luzhniki Stadium with a big lead but then stopped after crossing the line a first time.

With Kirdyapkina closing in fast, a judge urged the 21-year-old Lashmanova to get going again. She did, and managed to break the finishing tape on the second go-around for gold.

Russians have won seven of the eight women's 20K walks since the event was added to the program at the 1999 worlds in Sevilla.

Russia even had eyes on a sweep Tuesday, but Vera Sokolova was disqualified with about 500 meters to go, leaving Liu Hong of China to take bronze.

"It could have been the three of us on the podium," Lashmanova said.

Because of the walks, the host nation has moved up the medal standings into second place with five overall and two gold, right behind the U.S. with six overall and three gold. 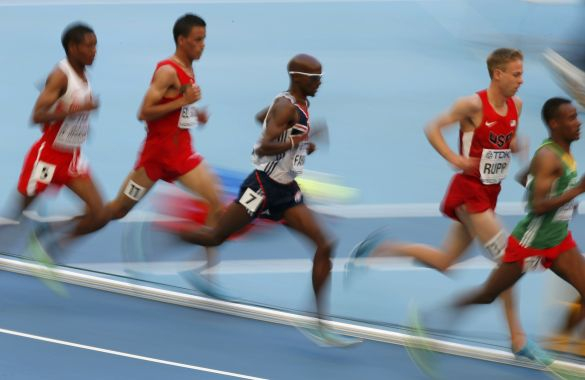 Farah of Britain, center, running in his 5,000 meters heat on Tuesday.

Mo Farah easily qualified for Friday's final of the 5,000 in front of a sparse crowd, coasting for the last half lap.

"I just wanted to do as little work as possible, freshen my legs up and get through to the final," Farah said.

With the first five finishers in each heat guaranteed a place in the final, the Briton was happy to take his foot off the pedal, crossing the line in fifth behind Ethiopian Muktar Edris, with the fastest man in the world this year, Edwin Soi of Kenya, in second.

Ethiopia's Hagos Gebrhiwet won the first heat despite almost taking the wrong bus from the hotel and arriving just in time for the race.

"We arrived so late that we went straight into the race without a proper warm-up, but luckily everything went well," he said.