“Over the past eight weeks we have seen the Obama administration show no respect for international or domestic law, but in the end the law is winning,” Snowden said after receiving the refugee certificate, which looks very similar to a Russian passport, as cited by WikiLeaks. “I thank the Russian Federation for granting me asylum in accordance with its laws and international obligations.”

The temporary refugee status granted to Snowden will expire July 31, 2014. It can then be subsequently extended for another year upon request or upgraded to 5-year permanent asylum. Snowden can eventually be granted Russian citizenship.

“I put him in a taxi 15 to 20 minutes ago and gave him a certificate on refugee status in the Russian Federation. He can live wherever he wants in Russia. It's his personal choice,” Kucherena told a handful of reporters, who had apparently been notified of the situation beforehand, around 4 p.m. Moscow time.

“Of course, he has already acquired a few friends here in Russia, including Americans,” Kucherena said later in an interview with television network Rossia 24.

The station also aired a picture of Snowden getting into a car with Kucherena standing before him. Kucherena said that the picture proved that someone was spying after them. 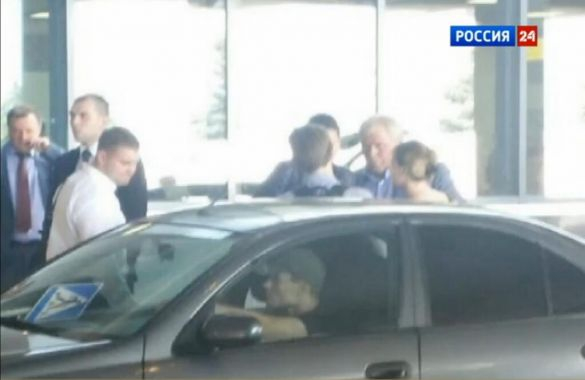 The status gives Snowden the right to travel and work around Russia, something he previously said he intends to do, according to Kucherena. The whistleblower said he would look for a job in Russia, planning to stay in the country long enough to familiarize himself with local culture, customs and language.

Pavel Durov, the majority shareholder of popular social network Vkontakte, quickly reacted to the news by offering Snowden to work for his company in St. Petersburg as an IT specialist.

But, according to Kucherena, instead of working for the IT industry, Snowden will now look for a job as a human rights activist.

Snowden has now abandoned his plans to travel to Latin America and will not stay at any of the Latin American embassies in Moscow, Kucherena said, adding that Snowden's whereabouts will not be made public due to security reasons.

A senior Kremlin official said he hoped the decision would not have a negative impact on U.S.-Russian relations, calling the situation around Snowden "relatively insignificant."

"Our president has … expressed hope many times that this will not affect the character of our relations," Yuri Ushakov, President Vladimir Putin's foreign affairs aide, told reporters.

President Barack Obama plans to visit Moscow in September, and there has been no indication that he will cancel the trip, Ushakov said.

Republican Senator John McCain has reacted to the news on his Twitter.

“Snowden stays in the land of transparency and human rights,” he quipped. “Time to hit that reset button again.”

“Russia’s action today is a disgrace and a deliberate effort to embarrass the United States,” he said subsequently in an official statement on his website.

McCain went on to call for retaliating against the move.

“It is a slap in the face of all Americans. Now is the time to fundamentally rethink our relationship with Putin’s Russia.” he said. “We need to deal with the Russia that is, not the Russia we might wish for. We cannot allow today’s action by Putin to stand without serious repercussions.

Adding to the absence of an extradition agreement between Russia and the U.S., the refugee status makes it literally impossible for Snowden to be tried in the U.S.

After one day of “adjustment,” Snowden will consider speaking to the press. Russian state TV channels have already extended him an invitation to participate in their Friday evening talk shows.

Snowden's father Lon, who has earlier said his son would not be afforded a fair trial in the U.S., has expressed his wish to travel to Russia to see his Edward. Kucherena said he will send him an invitation, which is necessary to obtain a Russian visitor visa.

The whistleblower's father and his lawyer in the U.S. will help Snowden make decisions about a place to stay and work in Russia.

“I am so thankful to the Russian nation and President Vladimir Putin,” Lon Snowden told the Rossia 24 state news channel Thursday.

The strikes underline "the very real risk of a nuclear disaster," according to the director general of the IAEA.