Moscow is gearing up to host one of the biggest sporting events of the year amid fervent calls in the West to boycott "all things Russian," and with 2,500 athletes from 205 countries participating, the 2013 IAAF World Championships in Athletics looks set to defy any such sentiment.

The championships, running from Aug. 10 to 18, will make use of numerous facilities of the Luzhniki Olympic Complex, which occupies 180 hectares in central Moscow.

Sebastian Newbold Coe, the chairman of the Organizing Committee of the 2012 Olympic Games in London and current IAAF vice president, paid a visit to Moscow on Tuesday to carry out the last inspection of the facilities before the championships. One of the major changes was that all running tracks were re-laid using the same surface that was used during the 2012 Summer Olympic Games in London.

As for Coe's assessment of the facilities, he gave local authorities a great deal of praise for their work.

"I am looking forward to magnificent world championships. I know that we not only made the right decision [by awarding the championship to Moscow], but will over the course of these championships recognize what a good decision that was," he said.

Unlike other large-scale events that Russia is set to host, the track and field championship did not require great capital investment. And unlike the Sochi Olympic Games, it has remained unscathed by calls for a boycott over controversial legislation that many view as anti-gay. 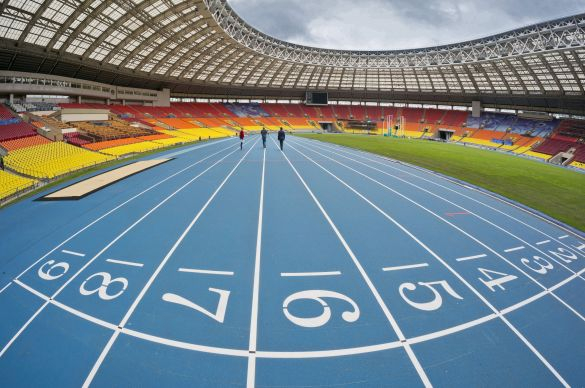 Journalists checking out the new track at Luzhniki Stadium during the last inspection of facilities Tuesday.

Incidentally, Coe was one of 219 British athletes who chose to come to Moscow for the 1980 Summer Olympics despite the official decision of the UK government to boycott the games over the 1979 Soviet war in Afghanistan.

So Coe, a multiple Olympic champion who later became a Member of Parliament for the Conservative Party in Britain, knows a thing or two about sports being used as a political weapon.

But, he said, sports must rise above political differences, and "it is only appropriate that athletics came to one of the great cities of the world."

"Sport is a unifying influence. Politicians from time to time work in systems that are complex and complicated, but the continuum is international sport, and I believe now as I believed then that it is far too easy to use sport as a response to something that politicians should deal with," he said.

Russian athletes will likely feel bolstered by Coe's comments, as Russia has high hopes for the  championships, with sights set on winning 15 medals, six of which must be gold.