The champagne flowed, stars of St. Petersburg's Mariinsky Theater entertained and the mood of the guests was buoyed by charts showing how the world is still buying nuclear reactors.

Backed by President Vladimir Putin, state-run atomic energy company Rosatom is redoubling its efforts to sell to developing countries such as China, India, and Vietnam.

Now a player in almost every global tender, it is marketing the legacy of the former Soviet Union's own nuclear disaster, at Chernobyl in 1986, as a lesson learned in nuclear safety.

"We want to make profits out of nuclear energy. We want to power the world," Rosatom chief Sergei Kiriyenko told the IAEA forum in late June.

Unlike Germany, where public disillusionment after Fukushima has ushered in plans to exit nuclear power, Russia is not only aggressively building reactors at home but also leading the charge abroad.

In Russia, there are nine reactors under construction, making it the world's second-busiest market behind China.

More nuclear power will allow Russia to export more of its oil and gas, and government plans call for nuclear to account for 25 percent of the domestic energy market by 2030, up from 16 percent powered by 33 reactors currently.

Helping spur the change is an integration of Russia's nuclear industry, both military and civilian, which has been brought under Rosatom's control since Kiriyenko's appointment by Putin in 2005.

The vertically integrated company now covers all facets of the industry, from uranium mining to fuel enrichment and recycling and grid development.

It's this muscle that is behind its push for exports.

"The Russian industry is mega," said Jeremy Gordon of the World Nuclear Association, a trade group. "They want to build nuclear at home to support exports of gas, and they've been able to use that strong industry to gain nuclear exports as well."

Of the 68 nuclear reactors under construction worldwide, Rosatom is building 28 — the nine in Russia plus 19 abroad including a controversial first plant for Iran, information from the IAEA and Rosatom shows.

In comparison, French rival Areva has just four reactors under construction, while Toshiba Corp. unit Westinghouse — although involved in building in the U.S., China and South Korea — has not completed a reactor since 1995.

Kiriyenko said Rosatom had increased its foreign contracts by 60 percent, to $66.5 billion, in the last two years. It wants to triple sales by 2030 and has opened marketing offices in six countries.

Rosatom is pitching a new all-in-one offer to "Build, Own, Operate,” or BOO, reactors aimed at allowing nations to enter the nuclear sector. It has won recent sales by offering full package deals to nuclear newcomers such as Belarus and Bangladesh, which have neither the money nor know-how to build a first reactor.

"Right now, Russia is it if you want that kind of help," Gordon said.

Not only will Rosatom finance and build a plant, but it will operate it for up to 60 years.

Twin reactors sold to Turkey will be the first to operate under this BOO model — although Ankara has awarded a $22 billion deal to a Japanese-French consortium to build its second nuclear power plant.

Rosatom estimates it will have orders for 80 reactors abroad by 2030, many under its BOO scheme.

Yet at a cost of at least $5 billion per reactor, some analysts question whether one company will be able to handle so many projects.

"Equity investment by vendors is the new emerging trend based on market conditions post-financial crisis. But it is not feasible for one vendor to take on a lot of projects," said Nadira Barkatullah, a former IAEA economist.

"What the vendor is trying to say is: 'We will do everything for you,'" Barkatullah said.

In addition to high costs, risks include political and regulatory changes during a building period which can last up to a decade.

Power generation is a lucrative business, but it is unclear how profitable Rosatom's export arm is. Russia has earmarked 1.247 trillion rubles ($37.5 billion) in taxpayers' money for Rosatom over the next eight years.

"What Russia is doing today, all these ambitious plans, is of course linked to politics and its desire to make countries dependent on Russia, which is something Putin is always reaching for," said Alexander Nikitin, a former Soviet submarine captain and chairman of Bellona's St. Petersburg branch.

Bellona says electricity tariffs are too low to cover the true expenses of the nuclear industry and maintains that the Russian government is essentially subsidizing the sector.

It notes that Rosatom plans to build a plant in Russia's European exclave of Kaliningrad despite sufficient energy there and criticism from neighboring Baltic states.

Yet for Moscow, the focus may be less on making a profit on the reactor itself than on operating the plant and on supplies of fuel over its lifespan.

As a legacy of the Cold War, Russia holds about 40 percent of the world's uranium-enrichment capacity — more than it needs to fuel reactors at home — exporting some $3 billion worth a year.

Rosatom offers discounts on fuel to clients who buy its reactors and, under a law signed by Putin in 2001, Moscow also offers to take back radioactive waste, an offer few vendors can match.

Rather than viewing it as a hazard, Rosatom believes that in the future some spent fuel may be burned in new types of reactors now under development.

"We chose Russia because they will take back the spent fuel — no other country has agreed to do that," said Bangladesh's envoy to Moscow, Saiful Hoque.

Russia and Bangladesh have signed an agreement to build Bangladesh's first nuclear power plant at Ruppur.

In the European Union, Rosatom has gained a foothold as a nuclear fuel supplier but still faces hurdles in reactor sales, as it does in some emerging economies such as Brazil and South Africa.

"In the advanced countries, who already have nuclear power plants in operation, the Russians are not so well positioned," said Jukka Laaksonen, a former Finnish regulator and now a vice president in Rosatom's export branch.

Still, it is the only player left in talks to build a reactor in Finland and front-runner in a Hungarian tender due by year's end to expand the Soviet-built Paks NPP.

"Russian reactors are the only experience we have, and we are really satisfied with the design," said Kristof Horvath, deputy director of the Hungary Atomic Energy Authority, a regulatory body which will not decide on the tender.

Moscow's former Soviet ties in Europe can cut both ways, however. Bulgaria dropped a plan for a Russian-built plant at Belene in part because of fears that it would deepen the country's dependence on Moscow.

Such considerations have prompted Ukraine to seek alternative nuclear fuel suppliers and could play a role as Rosatom and Westinghouse vie for a $10 billion tender in the Czech Republic which some see as a pivotal test of the technology's future on the continent. 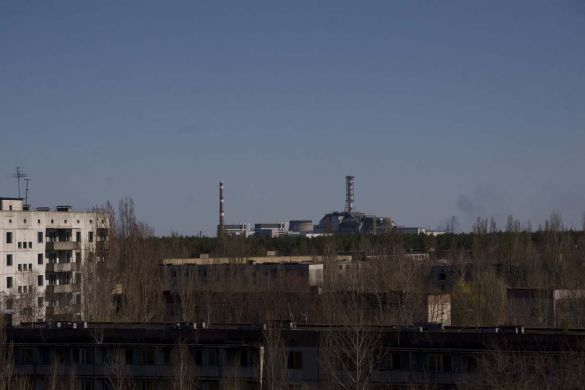 Among the casualties of the Chernobyl disaster is this town nearest the power station, abandoned to this day.

The 1986 reactor meltdown at Chernobyl, where it remains highly radioactive, still looms large.

It was a turning point for Moscow's long-isolated nuclear industry. In the 1990s, Russia worked with Western partners on testing safety technologies, building on research carried out in the United States and Japan in the 1970s.

But even after Chernobyl, Russia never really turned away from nuclear energy. A lull in the 1990s was largely due to budgetary constraints after the collapse of the Soviet Union.

Rosatom now says its reactors are safe because of Chernobyl, not despite it, with a safety net invented by Russian physicists after Chernobyl to prevent a melting reactor from burrowing into the ground one of its key design features.

It also promotes "passive safety" systems that rely on gravity and natural convection flows of water — instead of electricity — to cool down the core in case of an emergency.

Independent experts say Russia's VVER reactor may be cheaper than rival models but the design is as safe.

Rosatom says twin VVER-1000 reactors operating in China at Tianwan on the Yellow Sea are the world's first to feature its core-catcher safety net. Two more reactors are due to be completed there by 2019.

Two VVER units are due to go online soon in Kudankulam, India, as well.

Rosatom says since Fukushima, nuclear firms have been forced to protect against even further risks. The reactors to be built in Turkey are designed to withstand the impact of an earthquake or a plane crashing into them.