Moscow's main thoroughfare was shut down Thursday evening and dozens detained as thousands of demonstrators protesting a guilty verdict against opposition leader Alexei Navalny took to the streets.

Navalny, an outspoken Kremlin critic and anti-corruption blogger who shot to fame after leading mass protests in Moscow against disputed State Duma elections in 2011, was sentenced to five years in prison for embezzlement by a Kirov court, but before being whisked away in handcuffs, he sent out a tweet calling on supporters to protest.

Navalny's mayoral campaign also sent out a text message to supporters calling on them to attend the protest.

"Hi, this is Team Navalny," the message read. "We are now the resistance. Alexei Navalny is in jail. Many people are going to Manezh today. No violence. Our goal is to attract attention. Tell everyone."

In anticipation of the anti-corruption campaigner's supporters taking him up on his suggestion, riot police blocked off Manezh Square and Red Square, two of the city's biggest tourist attractions, by around 6 p.m.

But around 8 p.m., Tverskaya Ulitsa was brought to a standstill as protesters freely roamed about in the street, apparently prompting the arrival of police chief Anatoly Yakunin, who showed up around 8 p.m. "to talk to his subordinates," according to Interfax. 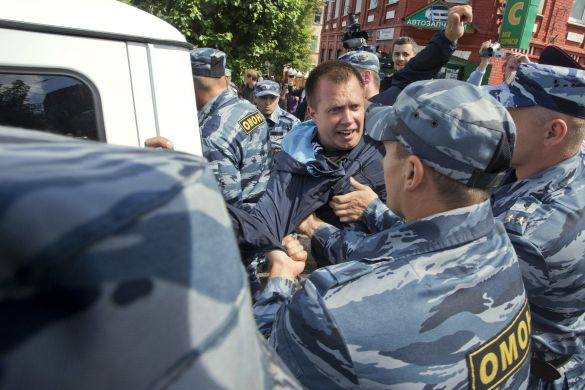 Riot police arresting a Navalny supporter during a demonstration in Kirov.

Many passing vehicles, rather than succumbing to road rage, honked to express their support.

By around 8 p.m., police estimated that 2,500 people had shown up. Former State Duma deputy Gennady Gudkov said there were nearly 10,000 protesters at the scene, however.

Despite the large turnout, most anti-Kremlin figures who led the protests of late 2011 and early 2012 were absent. Left Front leader Sergei Udaltsov is currently under house arrest on suspicion of plotting mass riots in a case many regard as politically motivated.

Thursday's protest has led to speculation about whether the verdict in the Navalny trial will lead to more street protests and a renewal of the movement that until now had seemed to be dying down.

Large crowds formed in front of the State Duma building, as well as the luxurious Ritz Carlton, with many chanting "Shame!" and clapping in unison as riot police looked on.

Several demonstrators also chanted, "Sobyanin, go away!" The white ribbon, a symbol of the opposition movement that President Vladimir Putin once joked he mistook for a condom, was revived as protesters waved it in the air.

Riot police began detaining protesters who linked arms just after 6 p.m., forcibly pulling them to buses set aside for detainees. OVD-info, which monitors police detentions, reported that as of 9 p.m., 58 had been detained.

The protest's organizers didn't file an application with City Hall for the event, calling it a "people's meeting" and citing a provision of the Constitution that says Russian citizens can "gather peacefully without weapons and hold meetings, rallies, demonstrations, marches and pickets."

Earlier, Alexei Maiorov, head of City's Hall's department of regional security, had warned that any unsanctioned protests would be dispersed immediately.

The number of political prisoners in Russia has risen sharply this year in a trend that recalls late Soviet-era repression.
melting ground

With temperatures rising, the Arctic's permafrost has started to thaw — further accelerating climate change in a vicious circle.
'no pressure'

Moldova is in a state of emergency after Russia's state-controlled energy giant Gazprom hiked gas prices.
arms from abroad