Bloggers have published pictures of a luxury mansion, believed to be owned by Vladimir Yakunin, the head of Russian Railways and powerful member of President Vladimir Putin's inner circle.

The three-story marble-clad mansion, occupying 70 hectares of land near the Moscow suburb of Domodedovo, was identified as Yakunin's property by bloggers using which they obtained.

The grounds include a 50 meter pool, a garage able to hold 15 cars, and premises for household staff. Alexei Navalny labeled Yakunin a "billion dollar man" in his on Saturday. The pictures appeared on yaplakal.com before being removed.

A builder identified only as Alexei told National News Service Radio that he built a sauna there three years ago. He said that the mansion had a "storage room for fur coats" among other novelties.

He said that the mansion, located at Akulino, Moscow region, belonged to Yakunin and his son Andrei Yakunin, 37, who works in the hotel development business.

While the interview with the worker is not available on the radio site anymore, the pictures from the mansion were republished by bloggers.

Yakunin has not yet confirmed that the property belongs to him. 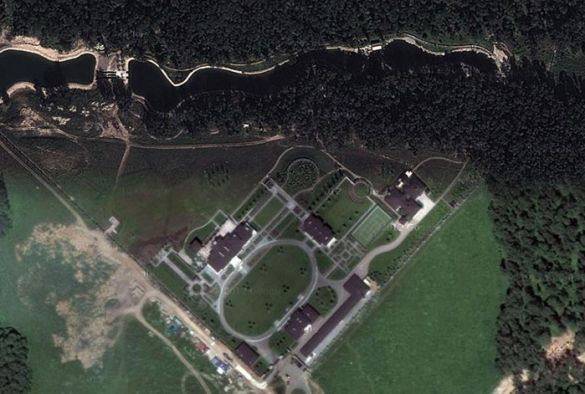 An aerial photograph showing what is purportedly a 70 hectare estate owned by the head of Russian Railways. (cybergo-ru.livejournal.com)

Pavel Salin, Director of Moscow Financial University's Center for Political Research, said that the information about Yakunin's mansion could tarnish his image due to the fact that he runs a company, used by millions of passengers daily. He also said that the campaign is seen as being orchestrated by someone who wants to replace Yakunin as rail chief.

Salin added that Yakunin's position became shaky after a report of the Governance and Problem Analysis Center (GPAC), chaired by state-owned Russian Railways, produced a report in March that the ruling United Russia party actually lost the 2011 elections to the Communist Party thanks to fraud.

Kremlin produced an angry reaction over the report, saying that it's author needed “psychiatric help."

He became the head of Russian Railways in 2005 and is thought to be one of Putin's closest allies. He presents himself as a reserved conservative with ties to Orthodox Church. One of the rooms with white interiors in the mansion shows several icons on the wall.

"This is definitely Yakunin, he is known to be Orthodox," anti-corruption blogger Alexei Navalny said in his blog entry. He republished the pictures on his site Saturday.