Contribute Today
By Ivan Nechepurenko
May 27, 2013

Despite historical grievances and lingering widespread resentment at home, the Czech prime minister's visit to Russia this week marks another instance of changing attitudes toward Russia in the former Warsaw pact countries of Eastern and Central Europe.

Prime Minister Petr Necas arrived in Moscow on Sunday with more than 80 representatives of Czech companies for a four-day tour of Russian cities that, apart from the capital, will also include St. Petersburg, Ekaterinburg and Sochi.

The visit may have gotten off to a scary start for the Czech delegation when the windshield of the government plane cracked en route to Russia, but the Czech Airbus A319 plane landed safely in Moscow and nobody was injured.

The visit still started with some negative news in the background, however.

Baranov said he was persecuted by Russia's Federal Security Service for his stance toward the band and outspoken criticism of the trial, and also said that he planned to convert to the Greek Orthodox Church.

Earlier, last July, Russian corruption fighter Alexei Navalny published documents on his blog purporting to show that the head of Russia's Investigative Committee, Alexander Bastrykin, had a residence permit and owned property in the Czech Republic, an accusation that provoked a scandal in the Russian press at the time.

On Monday, Necas met with Prime Minister Dmitry Medvedev in Moscow and with President Vladimir Putin later in the day in Sochi.

After meeting Medvedev, Necas called Russia “the Czech Republic's strategic partner not only in the sphere of politics and economics, but also in trade and security issues,” promising that the tender for the construction completion of the Temelin nuclear power plant would be “objective and transparent.” 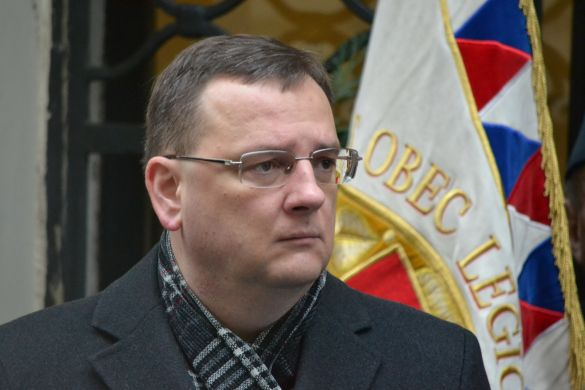 The $10 billion contest for the right to build two new reactors has been on the frontline of economic rivalry between the U.S. and Russia. The Temelin project will go down as the most expensive project in the country's history.

Petr Kratochvil, Director of the Czech Institute of International Relations, believes that the nuclear plant project was one of the key points of Necas' visit to Moscow.

“Necas came in order to show that the bidding process would be fair,” Kratochvil said on the phone from Prague.

Ahead of the visit, Necas told Itar-Tass that the Czech Republic was in favor of granting Russian holders of biometric passports visa-free entry to the Czech Republic, though it is up to the European Union to make a final political decision.

“We belong to the group of EU states that favor visa liberalization with Russia,” Necas said.

According to Kratochvil, the Czech government is naturally attracted to the idea that more Russian visitors will come to the country and contribute to its economic development.

“But visa liberalization with Russia cannot reach its goal earlier than with countries that participate in the Eastern Partnership project with the EU, such as Ukraine or Georgia. I don't think the EU will accept a situation when Russian passport-holders from South Ossetia or Abkhazia will be granted visa-free entry to the EU before Georgians,” he said.

Overall, Kratochvil said, there has been a gradual change in the stance of Eastern European countries toward Russia.

“Two major things have happened here: the change in the U.S. administration and the miraculous shift of Polish foreign policy,” he said.

The recently-elected Czech president, Milo? Zeman, has even been accused of being excessively pro-Russian, especially when he appeared to be drunk at the opening ceremony for a public display of Czech crown jewels that immediately followed his visit to 2013 Victory Day celebrations at the Russian Embassy in Prague, where he also recited a children's song in fluent .

Nevertheless, the fact that the Czechs have eased tensions with Russia does not mean that they will be pro-Russian.

“The change is not from Russophobia to Russophilia, but from being anti-Russian to being pragmatic and emotionally indifferent,” Kratochvil said.

The rest of the visit will focus mostly on economic relations with representatives of major Czech industries planning to sign contracts worth several billion rubles, the Czech news agency reported.

Meanwhile, in one sign of increasing economic cooperation, Moscow's recently unveiled bike rental services are getting a helping hand from specialists from Prague, since both the bikes and the operating system are practically identical to the system in place there, according to The Village.