Contribute Today
By Natalya Krainova
May 16, 2013

President Vladimir Putin will soon start arriving at the Kremlin by helicopter in an attempt to appease drivers who blame his motorcade for creating traffic jams.

Asked when Putin would start using it, Peskov said only, "It all depends," Interfax reported.

Putin is currently on a working vacation at his residence in Sochi.

Peskov, who several months ago announced the helipad plan as a way to ease Moscow traffic jams, said Thursday that he could only confirm that Putin would travel to the Kremlin in the Mi-8 because this is the only model of helicopter that the president flies.

Previously, Putin and his predecessor, Boris Yeltsin, occasionally landed by helicopter on the Kremlin's Ivanovskaya Ploshchad. But this site was rarely used because of fears of inflicting damage on the nearby Bell Tower of Ivan the Great and creating a nuisance to Kremlin bureaucrats and foreign tourists, Peskov said. 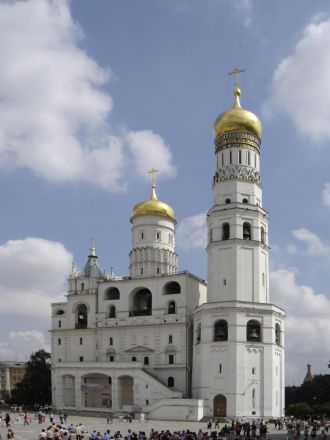 The old helicopter landing pad was rarely used because of fears of inflicting
damage on the Bell Tower of Ivan the Great, right. (Wikicommons)

Peskov assured reporters that the new landing pad posed no threat to any historical buildings in the city center.

The Mi8 was built in the Soviet Union in the 1960s and is currently used for a variety of civil and military purposes in more that 50 countries, including India, China and Iran. Putin used an Mi-8 last week to tour construction sites for the 2014 Winter Olympics in Sochi.

A helipad also was recently opened at the White House, allowing Prime Minister Dmitry Medvedev to arrive at work without a motorcade.

Peskov noted that Medvedev has reduced his trips by car significantly and said far fewer government officials were using flashing lights on their cars as a way to beat the traffic.

The flashing lights allow the government officials to violate traffic rules, including driving in the wrong lane.

But Peskov cautioned that Putin and Medvedev's decision to travel by helicopter and the limits on flashing lights on government vehicles would not solve the city's notorious traffic jams.

Meanwhile, State Duma Speaker Sergei Naryshkin also weighed in on the traffic issue Thursday, saying he and his colleagues were not disrupting traffic by closing down entire streets for their vehicles and only occasionally using their flashing lights to drive in the wrong lane, Interfax reported. 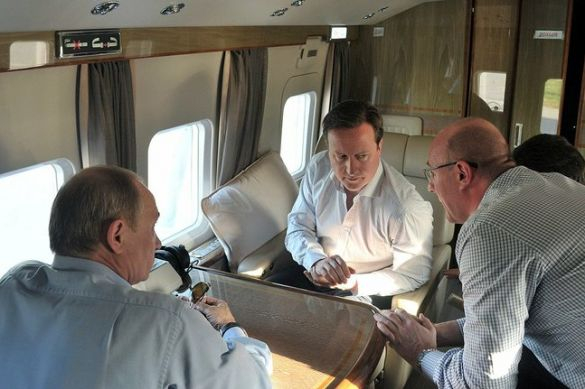 British Prime Minister David Cameron going for a ride on Putin's Mi-8 over Sochi on May 10. (Kremlin.ru)

Russia is now focused on securing and expanding its gains in Donbas and the southern coast.
fortifying occupation

Moscow-Held Kherson Region to ‘Ask’ for Russian Military Base

The expected request is the latest example of Russia strengthening its grip on occupied Ukrainian territories.
soviet callback