Contribute Today
By The Moscow Times
May 7, 2013

Residents of Far North town will be left without hot water this summer because of local fuel debts, but the mayor has a plan to keep everyone happy: free trips to the waterpark.

The mayor of Vidyayevo, which hosts a submarine base on the Ura Bay, told Murmansk Governor Marina Kovtun at a meeting Monday that the town's 5,771 residents won't have any hot water because of debts left over from the frigid winter months.

The mayor, Sergei Dubovoi, proposed resolving the problem by allowing residents to visit the local waterpark.

"You have a great water park," Governor Kovtun replied, according to local news site FlashNord. "Many Murmansk residents envy you."

Kovtun, however, also encouraged the mayor to resolve the debt issue.

It was not clear how the waterpark, Fregat, might respond to being asked to open its doors to the public. The waterpark, which has two waterslides and boasts on its website that its water is a warm 28 degrees Celsius year-round, has capacity for 110 people and usually charges 200 rubles an hour for adults to splash in its Aquazone and 150 rubles an hour for use of its "Amercian pool." 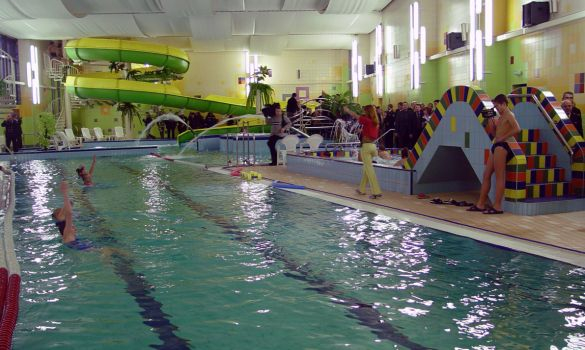 Vidyayevo is a closed town because of its association with the Northern Fleet.

Fuel oil has been a major issue for the town and surrounding region for years. With no hope for the regional gas pipeline or the Shtokman project, talks are being held with Rosneft on the supply of gas from a future LNG plant on Sakhalin Island, Kovtun said last month.

Murmansk is the most fuel-dependent region in Russia, and as the degree of refining increases the supply will continue to drop, the governor predicted, adding that "fuel will soon become a deficit."

The region requires about 1.2 million tons of fuel oil annually.