Contribute Today
By Alexander Bratersky
May 21, 2012 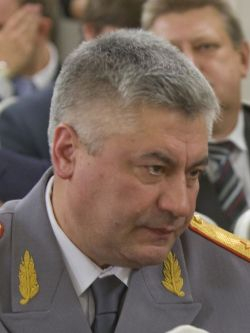 But his appointment promises to breathe life into an overhaul of the notoriously corrupt police force that stalled under Rashid Nurgaliyev, one of the country’s longest-serving interior ministers, police and government officials said.

“The president has made the right personnel decision, so I offer my congratulations to some and condolences to others,” Alexander Khinshtein, a State Duma deputy with United Russia, said when the news broke about Kolokoltsev’s appointment during a forum on police reforms in the city of Tula, south of Moscow.

The news of Nurgaliyev’s dismissal caught many senior ministry officials by surprise, including First Deputy Interior Minister Sergei Bulavin, who declined to speak after the announcement.

Police officials avoided criticizing Nurgaliyev, long accused of showing a lack of leadership within the ministry, and spoke positively about their new boss. “He is a professional cop, and he is one of us,” one senior official said on the sidelines of the forum.

Kolokoltsev, 51, is a career police officer who has risen to the rank of lieutenant general. Nurgaliyev’s background as a former Federal Security Service officer sometimes caused tensions in his relationships with police officials.

“He is a sober man who is ready to engage in dialogue,” Viktor Ozerov, chairman of the Federation Council’s security committee, said of Kolokoltsev.

Kolokoltsev, born in the Penza region on May 11, 1961, got his start in the police force in 1982, guarding diplomat missions in Moscow — a sensitive position that allowed him to control the access of Soviet citizens. He worked in Moscow until 2007, when he was made police chief of the Oryol region. In 2009, he returned to the capital and was soon named police chief, replacing Vladimir Pronin, who was disgraced after a police officer went on a drunken shooting spree in a Moscow supermarket, killing two.

Kolokoltsev raised eyebrows the next year when he — echoing then-Prime Minister Vladimir Putin — questioned the practicality of civil liberties when law and order are at stake.

“All these problems are more difficult to solve compared with a time when a much tougher registration system was in place,” he said on Dec. 22, 2010, less than two weeks after ultranationalists rioted near the Kremlin’s walls. “We really need to have a look at how far our liberal democratic principles correspond to the demands and desires of the city’s population.”

Kolokoltsev personally convinced the ultranationalists to leave Manezh Square by assuring them during talks on the square that he would look into their grievances about the police’s handling of an investigation into the killing of an ethnic Russian football fan by a Caucasus native.

He was responsible for keeping a close eye on anti-Kremlin protests, which largely remained untarnished by violence until riot police and demonstrators clashed on the eve of President Putin’s inauguration this month.

Ovchinsky said Kolokoltsev would be open for dialogue with protesters who did not pursue radical methods. “You can’t answer nonviolent methods with violence,” he said.

Ovchinsky and others at the forum predicted serious changes within the Interior Ministry’s leadership under Kolokoltsev, but Senator Ozerov said several deputy interior ministers would likely keep their posts.

One of them might be Bulavin, who worked for the presidential administration before being transferred to the Interior Ministry.

But several influential panelists at the forum openly challenged Bulavin when he described police reforms initiated during Dmitry Medvedev’s presidency as largely successful.

Deputy Khinshtein said personnel cuts have affected police patrol and investigation divisions and not the mammoth police apparatus as was planned. “You can’t talk about a serious house cleaning,” he said.