Thousands of Russian emigres in more than 60 cities, from Seoul and London to Yerevan, Vilnius and Belgrade, took part in solidarity rallies Saturday in support of jailed Kremlin critic Alexei Navalny and other Russian political prisoners.

Attendees at protests attended by The Moscow Times chanted “No to war” and “Freedom to political prisoners,” and held placards and flags including the Ukrainian flag and the Russian flag with the red removed — an anti-war symbol.

“I came here because I don’t support the political regime in my country and I believe that the war needs to end,” Yulia, a young woman in her 20s attending a rally of several hundred people in the Serbian capital Belgrade told The Moscow Times.

“My soul hurts for my country,” she said.

The rallies mark the first coordinated campaign by Navalny’s supporters since Russia-wide protests after the opposition politician was imprisoned two years ago and his political network blacklisted as “terrorist” by the Kremlin.

In the Armenian capital, Yerevan, there were protests on both Friday and Saturday.

“I came here to show my support for Alexei Navalny,” said Leonid, a Russian protesting with dozens of others Friday outside the Russian Embassy in Yerevan.

“I want to express my support for all Russian political prisoners and also protest against the war,” said Alexander, a Muscovite in his 20s at the same protest who was holding a placard with the name of detained Russian activist Dmitry Ivanov.

“I know Dima, he’s a great person and was prosecuted for telling the truth about Bucha and Mariupol,” Alexander told The Moscow Times, referring to the sites of alleged Russian war crimes.

Hundreds of thousands anti-war Russians have fled abroad since the start of the invasion of Ukraine, settling in cities all over the world — but with particularly high concentrations in Turkey and the formerly Soviet nations of Central Asia and the South Caucasus.

In the Kyrgyz capital of Bishkek, a few dozen Navalny supporters rallied Saturday in the city center despite efforts by the local authorities to dissuade people from taking to the streets. 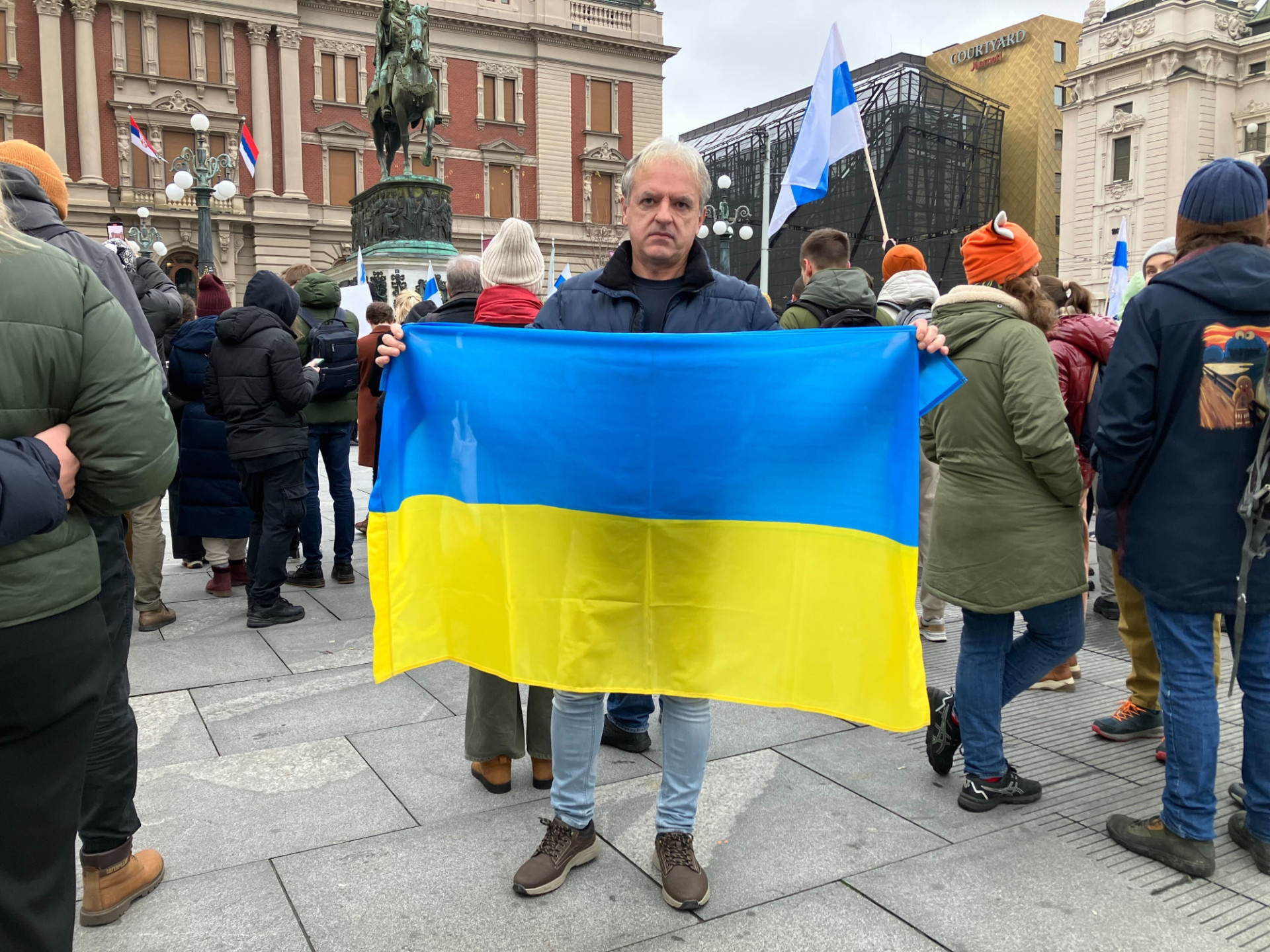 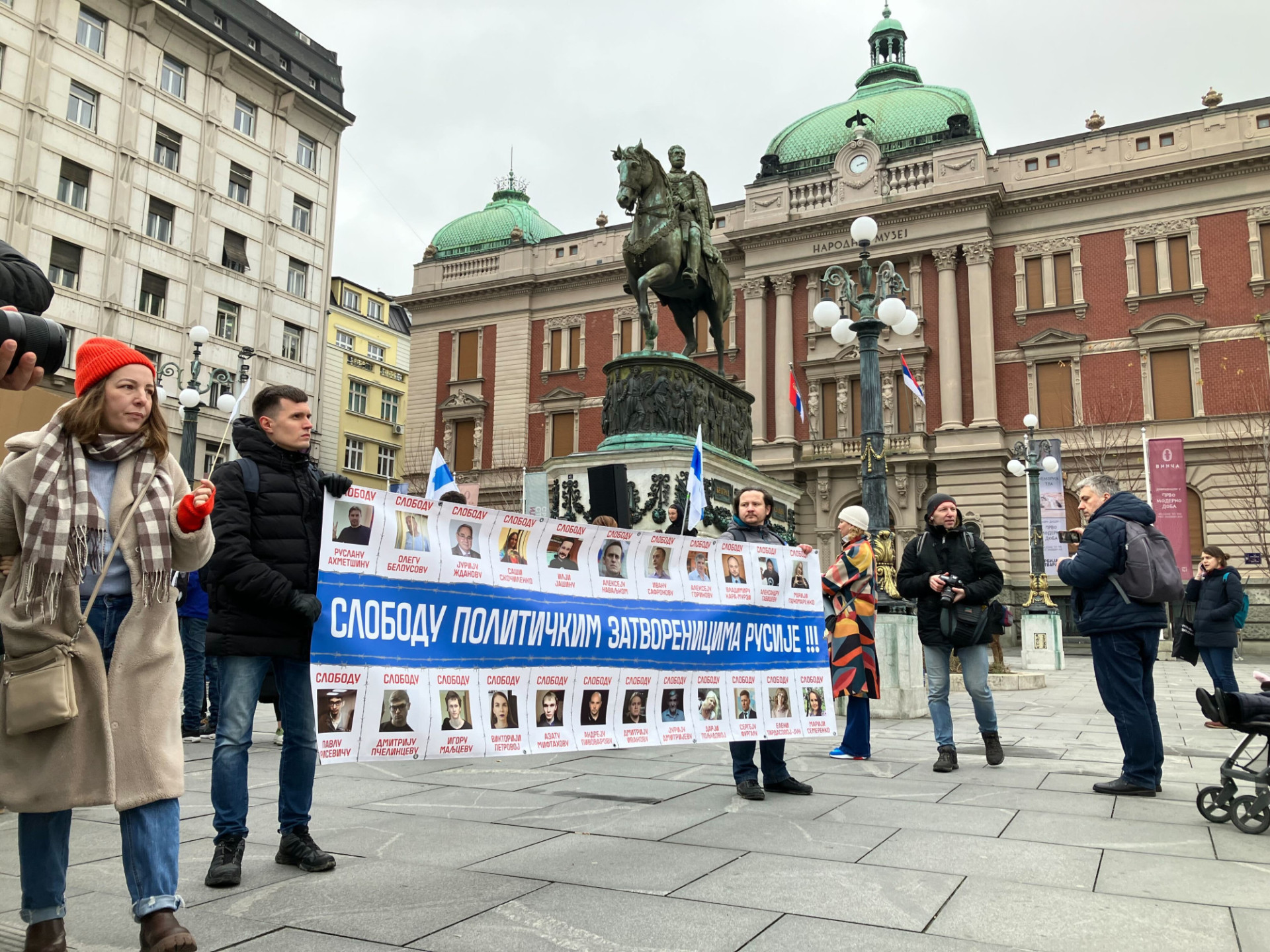 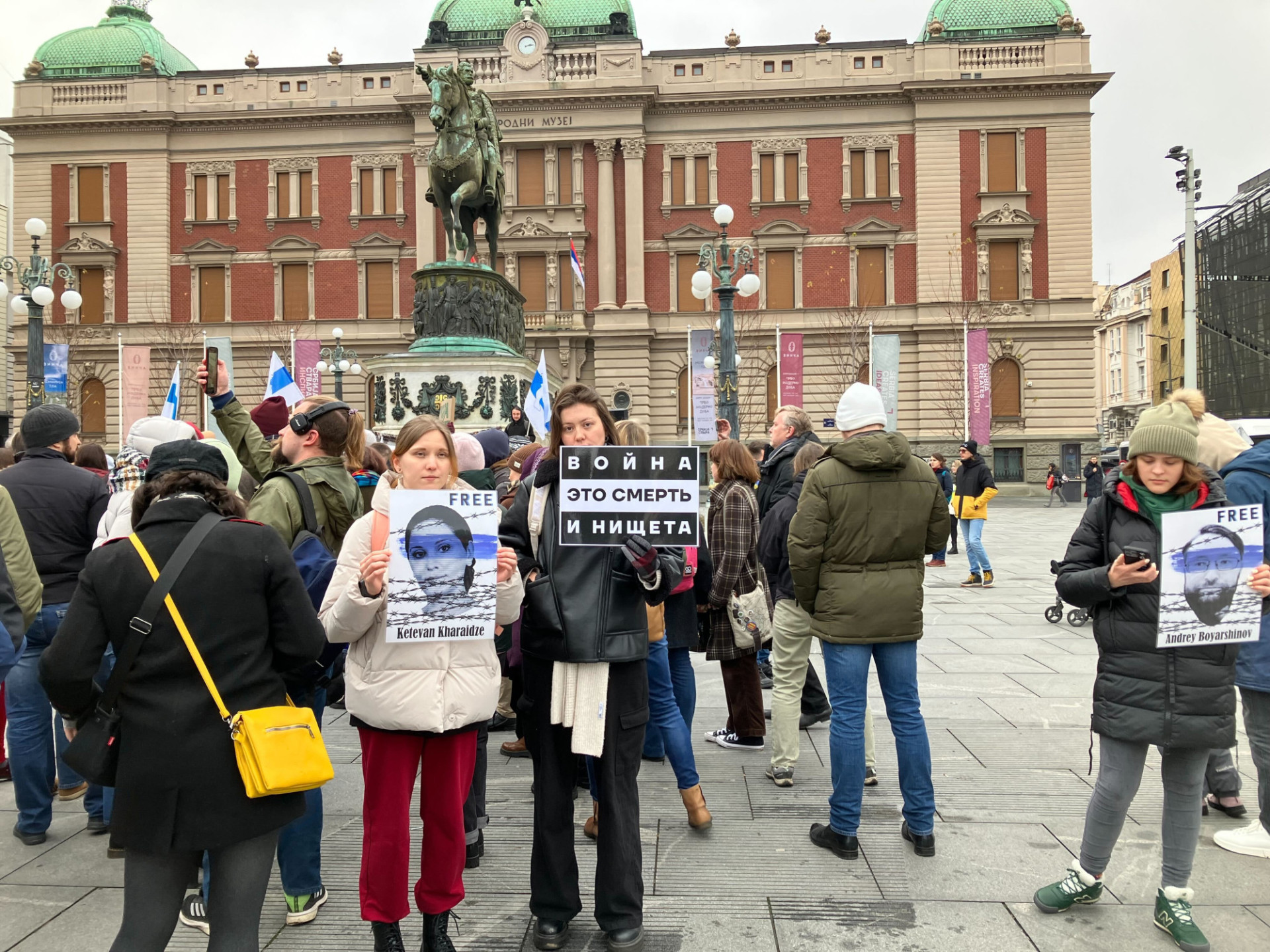 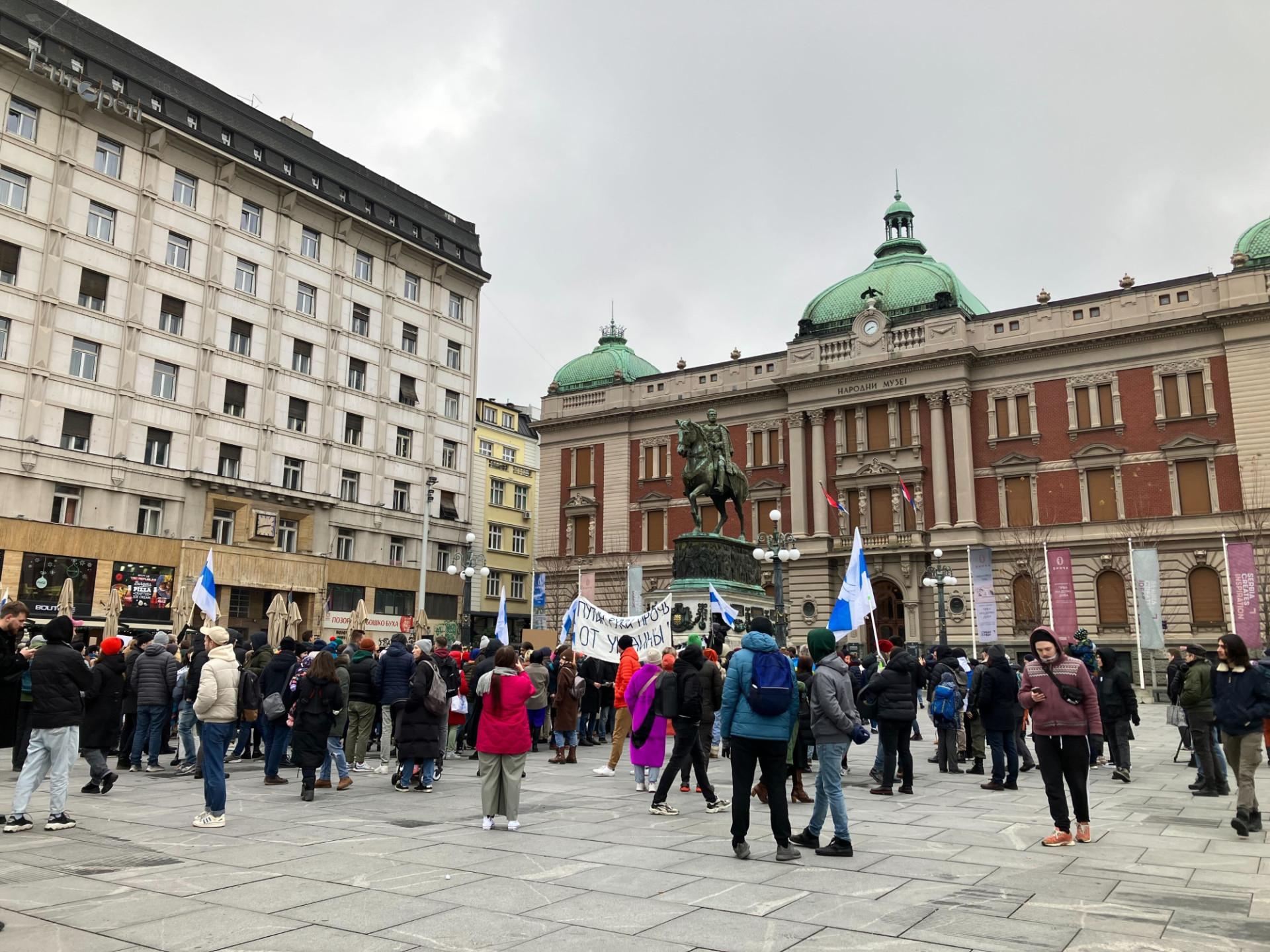 “Technically speaking, they have the right to disperse us,” Artyom, an editor at an independent Russian media outlet Takie Dela, told The Moscow Times in Bishkek, referring to a group of Kyrgyz police standing nearby.

The global protest campaign in support of Navalny lists the end of the war in Ukraine, the release of Navalny and other political prisoners and “more pressure” on the Russian regime from “democratic countries” among their demands.

But rally organizers appeared to avoid being seen to put too much pressure on the governments of their host countries, likely in fear of potential repercussions for members of newly established diaspora communities.

Bishkek was the only city in Central Asia to stage a protest despite large numbers of Russian migrants living in cities all over the region.

In Serbia, protest organizers said they were wary of being seen to meddle in local politics.

“We are generally very careful about Serbian politics, this is not a simple country,” Pyotr Nikitin, co-founder of the Russian Democratic Society that organized the rally in Belgrade, said on the eve of the gathering.

While Belgrade has seen an influx of anti-war Russians since the invasion of Ukraine, many Serbians are pro-Moscow and Serbia is the only country in Europe not to have imposed sanctions on Russia.

Both anti-war Serbs and Russian emigres in the Balkans country attended the rally Saturday.

“I first came out to protest in St.Petersburg when Navalny was arrested, so it’s very important for me to be here,” said Yegor, an attendee at the Belgrade demonstration in his early 20s who was wearing pins in the colors of the Ukrainian flag.

“It’s important for Russians to take to the streets in the cities where they moved. We need to show we are not silent,” he told The Moscow Times.

The timing of the worldwide rallies coincides with the two-year anniversary of Navalny’s return to Russia from Germany where he was treated after a near-fatal poisoning with banned Soviet-designed nerve agent Novichok that he blames on the Kremlin.

Navalny was arrested by Russian authorities immediately upon arrival at Moscow’s Sheremetyevo Airport on Jan. 17, 2021.

“I said it two years ago, and I will say it again: Russia is my country… I am a full-fledged citizen and I have the right to unite with like-minded people and be politically active,” Navalny wrote on Twitter on the anniversary of his arrest last week.

Observers said the rallies were an attempt to raise awareness about the plight of Russia’s most prominent opposition leader.

“Navalny has been behind bars for so long and Western coverage of Russia is dominated by Russia's war on Ukraine, meaning that he may well have slipped out of focus for many. The campaign is a way to put him back on the radar,” said Ben Noble, co-author of the first English-language book about the opposition leader.

Supporters have been sounding alarm over Navalny’s deteriorating health for weeks.

In a video clip released to coincide with the campaign, Navalny’s daughter Dariya Navalnaya said her father was being deliberately isolated in the maximum security prison outside of Moscow where he is serving a nine-year sentence.

“They are tormenting him and depriving my father of any connection with the world in order to silence him,” Navalnaya said in the video.

Despite the global efforts to bring Navalny’s case back into the spotlight, the protests will almost certainly achieve few concrete results, according to expert Noble.

“It’s unlikely the team imagine the campaign will result in Navalny being freed,” Noble told The Moscow Times.

“But it may serve to remind the Russian authorities that the world is watching.”

Of Borscht and Protests: The Female Future of Russia’s Opposition

Women in Russia’s opposition have been drivers of change long before entering the spotlight in the wake of Alexei Navalny's jailing.
back to the streets

“The experience of Jan. 23 showed that free people are much stronger than fear,” Navalny's aide Leonid Volkov said.
international image

Leaders criticized what they called harsh tactics by Russian police and called for new sanctions.