Chief Kremlin critic Alexei Navalny returned to Russia from Germany today and was immediately detained. The 44-year-old opposition leader flew back to Moscow after spending several months in Germany recovering from a poisoning attack that he said was carried out on the orders of President Vladimir Putin.

Follow the latest developments on the Navalny return here:

21.40 Amnesty International has declared Navalny a prisoner of conscience.

21.15 Russian prison authorities confirm Navalny has been detained for violating the terms of his probation. He will remain in custody until the court hearing. Meanwhile, 53 people have been arrested so far at Vnukovo Airport.

21.00 Navaly has been arrested at passport control. His lawyer was not allowed to join him.

20.50 Navalny briefly talks to journalists after getting into the airport terminal. He said that he is "absolutely happy" that he arrived, calling it the "best day in the last five months."

The politician criticized the authorities for diverting the plane and "putting the aviation industry in danger." He apologized to the other passengers for all the commotion and said he is not afraid of arrest. Navalny is now going through passport control.

20.40 Navalny has left the plane and is now on the bus en route to the airport terminal.

20.30 The first passengers are starting to exit the plane.

20.15 The plane with Navalny on board has landed in Moscow at Sheremetyevo Airport.

20.00 Vnukovo Airport announced that the plane with Navalny aboard has been diverted to Sheremetyevo Airport. Pobeda Airlines told Dozdh TV that three of their flights were diverted due to "technical reasons."

19.55 Navalny's plane is currently circling near Moscow. Pobeda Airlines told Reuters that Vnukovo Airport is closed for all arriving planes. Baza, a telegram channel close to Russian law enforcement, says the flight is being redirected to Sheremetyevo Airport.

19.15 More arrests of Navalny supporters in and outside Vnukovo airport. Navalny is expected to land in the next 10-15 minutes.

18.50 Riot police have arrived at Vnukovo Airport. Police are attempting to push out some of the journalists and Navalny supporters waiting by the arrivals area.

18.28 Four close aides of Navalny, including his brother Oleg, have just been arrested at Vnukovo Airport as they awaited Navalny’s arrival. According to eyewitness reports Oleg Navalny, Lyubov Sobol, Ruslan Shaveddinov and Konstantin Kotov were detained while sitting in a cafe at the airport.

17.10 Alexei Navalny has boarded the plane in Berlin for Moscow together with his wife Yulia Navalnaya. The plane has now departed.

16.50 An unknown passenger has been removed from Navalny's plane prior its departure from Berlin.

16.25 The first arrest has reportedly been made at Vnukovo Airport as police detained activist Dmitry Beskorovayni, the legal news website OVD-Info reported.

15.50 The international arrivals area at Vnukovo Airport has been cordoned off with metal fencing in anticipation of Navalny's arrival later today.

15.45 Navalny will be transferred directly to his scheduled flight by the German security services and will not enter the airport building, DW reports.

15.10 The official Twitter account of Vnukovo Airport compared Navalny's return from Berlin to the Nazi German invasion of the Soviet Union, saying that the airport had "met planes from Germany in 1941 and will meet them in 2021."

14.10 A number of activists and journalists in the St. Petersburg region who had planned to go to Vnukovo airport reported that they were detained before leaving for Moscow and unable to travel to the capital.

14.00 Vnukovo airport has put restrictions on journalists reporting inside the terminal, and the authorities have warned supporters not to gather. Journalists in Berlin have gathered at the entrance of Brandenburg airport to film Navalny departing for Moscow later today. 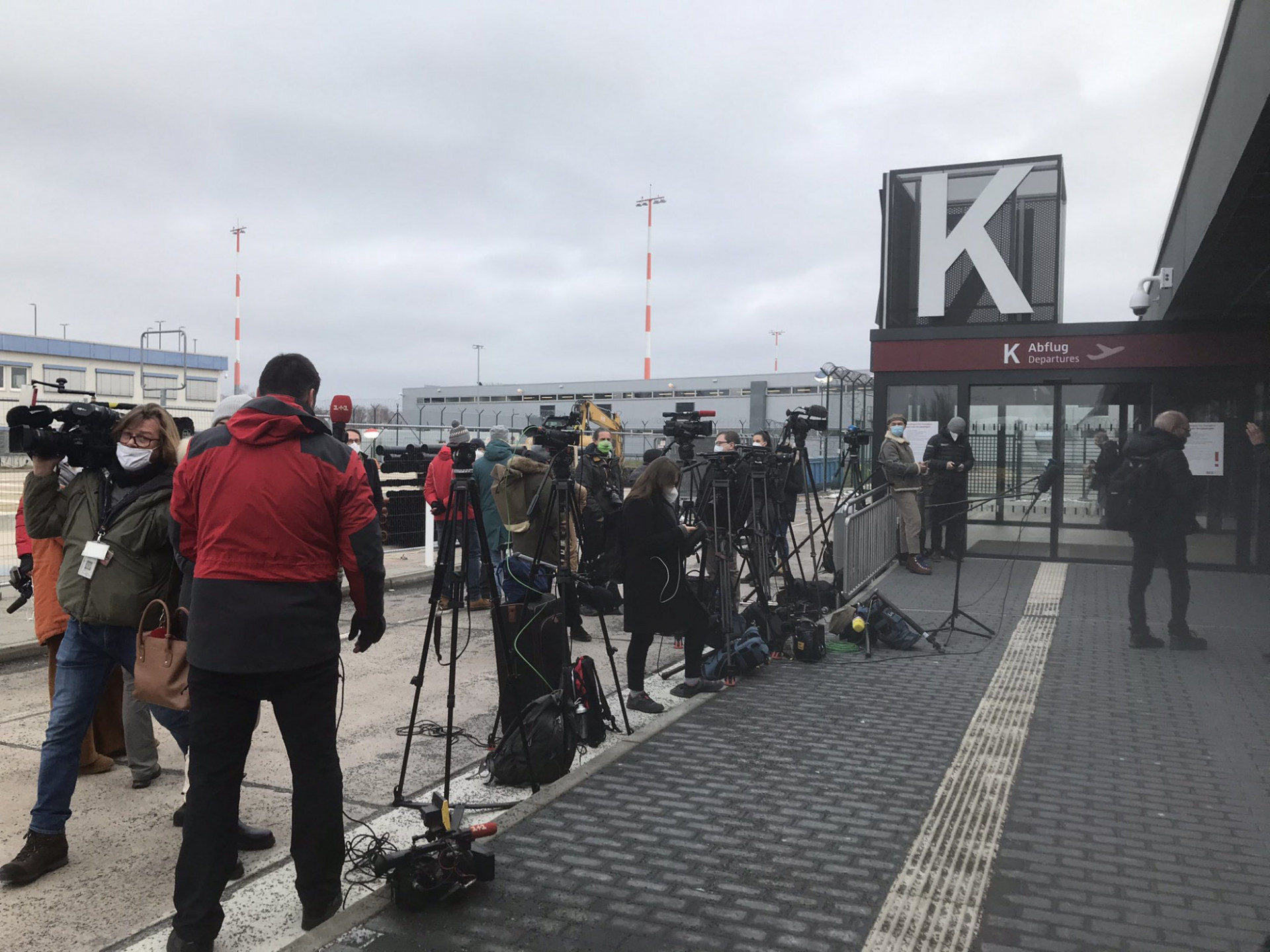 ‘They Will Break You’: Inside Navalny’s Notorious New Prison Home

In conversations with The Moscow Times, former inmates of the jail spoke of psychological isolation and harsh conditions.
contradictory rhetoric

An Amnesty employee linked the move, which was a response to Navalny's past nationalist statements, to a “coordinated campaign to discredit him.”
opinion Mark Galeotti

Navalny the ‘Escape Risk’ Faces a Campaign of Silence

The Kremlin hopes it can bury Navalny in the prison system while it blackens his name and grinds away at his movement.

The limited move looks set to disappoint those calling for a tough response against Moscow.