Russian youth leader Ramil Ibragimov is to be investigated for “supporting terrorism” after publishing an anti-gay rant in support of the Orlando gunman.

“In Orlando (USA), some upright Afghan guy shot a gay nightclub to s***! 50 f*****s! Another 53 are now in the hospital,” Ibragimov wrote on his Instagram. “We hope that they die too. The Union of Young Innovators absolutely support this decisive action!”

The post was later deleted, but had been shared widely on social media.

Ibragimov is the president of the Union of Young Innovators of Tatarstan, a group which supports technological entrepreneurship. 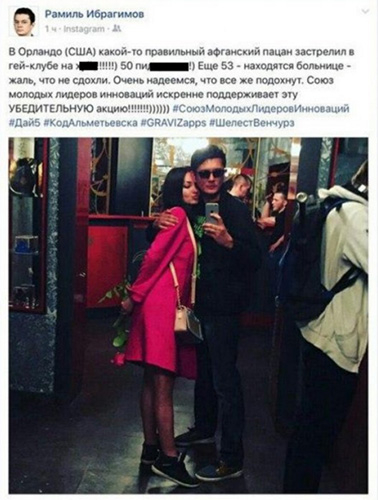 He said that the post was not the official position of the group but told Kazan-based news website Realnoe Vremya that he had been “laughing about it with friends” when he wrote it.

The blogger has since said that while he considers homosexuality to be a sin, he does not support the shooting.

“I can't stand gay people and I don't love the U.S. either- but that Instagram post was foolish,” Ibragimov said.

“These false values - brainwashing people into believing that homosexuality is normal, that we have to be tolerant – they've all been brought purposefully from abroad. I am an absolute patriot, one hundred percent,” he said. “But I'm not going to justify these murders. Murder is a mortal sin, just like homosexuality.”

American citizen Omar Mateen opened fire on LGBT clubgoers at the Pulse nightclub in Orlando, Florida on June 12. Before the attack, Mateen had pledged allegiance to the Islamic State, a terrorist organization banned in Russia. Some 49 people died and 53 more were injured as a result of his actions.