In the hours after saboteurs cut the power lines from Ukraine on the night of Nov. 21, electricity came to the Crimean resort town of Yalta in bursts. Sometimes for an hour, sometimes for only 15 minutes.

"You're watching the news and, 'poof,' it's off. It turns on again, then, 'poof,' off it goes," said local resident Alexander Solopin, 25.

Locals in Yalta described how mobile signals temporarily went dead. People rushed to stock up on gas, fearing that the pumps would stop working, forming lines more than a hundred cars long. Crimea's largest towns, including Yalta, were put on rolling blackouts, with districts rationed a few hours per day. Elsewhere on the peninsula, home to around 2 million people, it was dark.

Some 70 percent of Crimea's energy came through electricity lines that were knocked down on the weekend by unidentified attackers in southern Ukraine. As Ukrainian nationalists and Crimean Tatars blocked repair work, Crimeans prepared for up to a month of power shortages before a cable can be laid across the 4 kilometer Kerch Strait from the Russian mainland.

Crimeans were suffering their second blackout in less than a year, after power from Ukraine was briefly cut last December. Kiev views Crimea, which Moscow annexed last year, as occupied territory, and both Russian and Ukrainian authorities have whipped up popular anger against one another and imposed mutual economic sanctions.

This time, people were better prepared. Many private households and businesses such as hotels have their own generators. The worst affected were those in apartment buildings with electric heating and ovens — for them, cooking and washing have become difficult.

People also worried that power surges would break electronic equipment, and that without fridges, food would spoil. In Yalta, where the average wage is less than 15,000 rubles ($230) per month, these things are expensive to replace.

The region's industrial output is also at risk. Solopin, a supervisor at a building materials factory near Yalta, phoned Krymenergo, the state energy company, on Nov. 22, to be told there was no power; hospitals, schools and nurseries had been given priority, and Solopin's plant could only count on a sporadic few of hours of electricity per day. He said the factory would likely have to close. 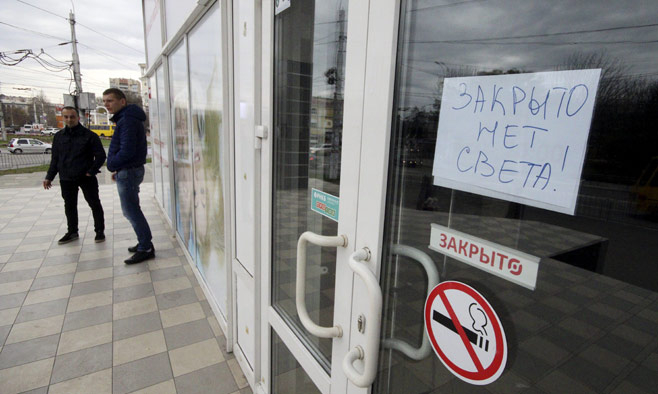 Men standing near a shop in Simferopol, Crimea on Sunday. The shop's sign reads "Closed, no power!"

It was not immediately clear who was responsible for the attacks on the power lines, though news reports said a Crimean Tatar flag was pinned to one of the destroyed pylons. Tatars and Ukrainian nationalists accuse Moscow of repressing non-Russians on the peninsula.

Some in Yalta, a mostly ethnically Russian tourist town on Crimea's southern coast, blamed Tatars, while others pointed the finger at Right Sector, a Ukrainian far-right group that has been vilified in Crimea.

But responsibility for the peninsula's well-being was laid on Russia. Russian authorities have distributed generators and fuel, but locals said some were asking why, a year after the last blackout, no electricity cable had been laid from the mainland, and why many gas pumps had been allowed to run dry.

Yet the mood was optimistic. A "fighting spirit" was in the air, said Yulia Tarasova. And for many it is a familiar situation. "We spent our childhoods like this," said the 27-year-old shop worker, who was born as the Soviet Union disintegrated and grew up in the chaotic 1990s.

Locals said that on Nov. 22, a Sunday and the first evening without electricity, Yalta's seafront headland was packed with people. The night was warm, 20 degrees Celsius, and people gathered to talk, play games and sing songs. It was like New Year's Eve, said one woman who did not want to be named.

"We're not a nation that will sit and cry," said Tarasova.

But the good mood may be tested if the electricity shortages continue. Kiev responded to Russian calls to repair power lines by suspending all transportation and freight traffic to Crimea, and for now Russia can only supply goods to Crimea by ferry. The price of some essential goods was already rising. On the first day of the blackout you could buy a pack of candles for 40 rubles ($0.60), locals said. Within days, a single candle, if you could find it, cost 60, or even 80 rubles, though food was still available.

With no action from Ukraine to reconnect the peninsula, Russian Energy Minister Alexander Novak told the Vesti radio station on Nov. 24 that supplies of coal to Ukraine could be cut. Soon afterward, Crimean Tatar leader and Ukrainian member of parliament Mustafa Dzemilyev, a hardline advocate of the energy blockade, said one power line would be fixed, allowing a partial restoration of electricity.

"We are ready for the worst, but hoping for the best," said Tarasova.