On a Sunday morning at the Meteor stadium in western Moscow you would be forgiven for thinking you were in Southeast Asia, far from the Russian capital.

The air was stuffy and warm, rich with the smell of food. People crouched along the sports hall's walls around portable rice cookers, sharing homemade dishes and chatting loudly. Once in a while someone bolted to their feet to support their favorite basketball or volleyball team, and the hall reverberated with deafening cheers.

This is where hundreds of the Moscow elite's Filipino nannies, cleaners, chefs and drivers come to unwind every week during the summer for a sports tournament.

Ask Filipinos, famous worldwide for their hard work and smiles, what they think about life in Russia and they will talk of feeling secure, loving their employers and the children they look after.

But behind the "I love Moscows" there are also stories of extortion, struggles to adapt to life in Russia and dismay at the collapse of the ruble.

Like many foreigners in Moscow, one of the biggest challenges for recent arrivals from the Philippines is the inability to communicate with the local population.

"These are the calls that we usually get: Hello? Yes. [Is this the] embassy? Yes. Can you please tell me how to get to the embassy?" says the Philippine Embassy's consul general, Melchor Lalunio.

A 55-year-old Filipino woman known in the community as Auntie Loretta says she advises new arrivals to address their questions to Russian children.

"They're more educated," she said. "And the old babushkas are racist." 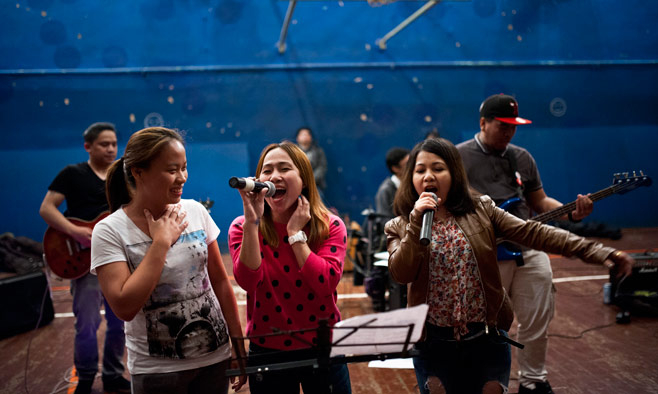 Members of a local band performing Filipino pop songs at the disco night.

Economic migration of Filipinos to Russia only began about 15 years ago, as the Russian economy was booming, said Lalunio.

In 2004, there were 2,010 Filipino nationals in Russia. In 2013, that number had soared to 4,335, according to the most recent statistics from the Commission of Filipinos Overseas, a Filipino government agency that monitors migration.

Local Filipinos said the current number is probably much higher — they estimate Russia houses around 8,000 Filipinos, if unregistered migrants are taken into account. About 93 percent of all the Filipinos in Russia live in Moscow, said Lalunio.

Many Filipinos working in Moscow have professional training, but nearly all of them work in the household service sector — as cleaners, nannies, cooks or drivers.

"When I first came here I was disappointed with myself. I studied for so many years and then I came here as a cleaner," says Faith Valente-Hay, 42.

But the math was clear: As a nurse working in Manila she had been earning $250 a month. As a cleaner in Moscow she would be making $800.

Auntie Loretta was a pharmacist in Manila before she moved to Qatar to work as a full-time nanny. Pay in Qatar was comparatively low, she said, and competition fierce. So she gladly moved to Moscow 10 years ago to work for a German expat: once again as a nanny, but this time for five cats.

Most Filipinos said they preferred cleaning over other jobs that many Westerners might consider more highly skilled, such as being a nanny, because it doesn't have an emotional cost and is well paid. 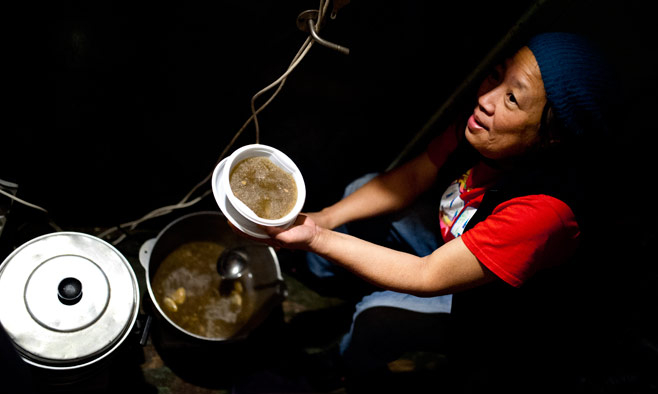 Auntie Loretta, who sells her home-cooked meals at the sports tournament every Sunday, is famous for her smiles.

Men were also keen to take up the mop in Russia, though they said they would think twice about doing the same work in the Philippines. "One of my basketball teammates is a civil engineer. Now he's working as a cleaner," says fellow cleaner Alvin, 32, whose surname has been withheld because, like many Filipino workers in Moscow, he does not pay taxes.

"If you go abroad, even if you're a cleaner, you're in another stage [of your career.] My family knows that I'm in a successful phase," says Alvin, a former salesman for the Abu Dhabi National Oil Company.

Most Filipino workers send home around half of their incomes.

From 2006 to 2013, the total money transferred from Russia to the Philippines per year through Western Union and other payment systems increased more than eightfold — from $1.9 million to $18 million, Russian Central Bank statistics showed.

As the transfers are made in U.S. dollars, Filipinos' fortunes have dwindled as the ruble plummeted during the last year. Money transfers fell by $1 million last year.

"Before the crisis I earned about $1,500 to $2,000 [per month,]" says Valente-Hay, who cleans for five different households. Now she earns about half that amount in dollar terms.

Alvin said he had lost four of his expat employers in the past year after they were relocated from Russia.

Compared to the average Muscovite, whose wages averaged 62,700 rubles ($955) this year, according to Moscow city statistical office Mosgorstat, Filipino cleaners are not doing badly. 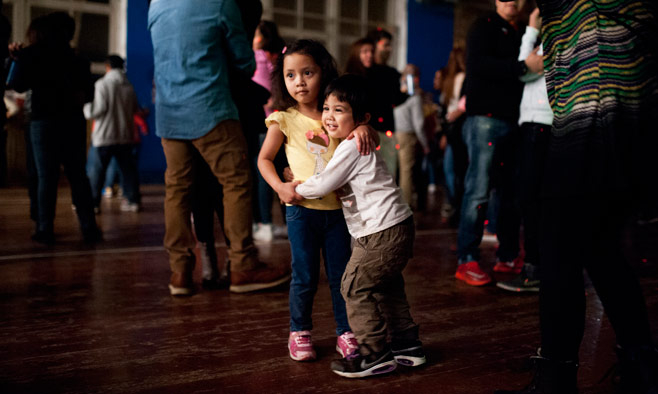 These two children are the exception to the rule: Most Filipinos in Moscow choose to leave their children in the Philippines and send money back home every month.

Filipino migrants have traditionally been limited to working for expats, because Russian employers had their pickings among migrants from former Soviet countries, who have the advantage of speaking Russian, generally have lower salary expectations and can obtain a Russian visa more easily.

But a recent trend for Filipino labor in local Moscow households could make Filipinos less reliant on the comings and goings of expats.

"It is no longer unusual [for Russians] to have a Filipino worker," says Natalya Busurina, an employee of the Filippinki.ru agency, which was set up seven years ago.

The agency matches around 10 Filipino workers to mostly Russian employers every month, flying them in from the Philippines, Hong Kong or Singapore.

Filipinos have a reputation for working harder than local staff, and having a Filipino employee around the home is considered a cheap way of enabling Russian children to grow up in an English-speaking environment, says Busurina.

In a section titled "Why Philippines" on their website, the agency also lists: "They don't speak any Russian, and therefore 'airing your dirty linen in public' is out of the question," "They can cook exotic Asian dishes" and "They always look clean."

Like Central Asian migrant workers, Filipinos say they are frequently stopped by police in the metro or on the street and asked for their documents. Some say the police go out of their way to target them because of their relative affluence compared to other migrant groups. 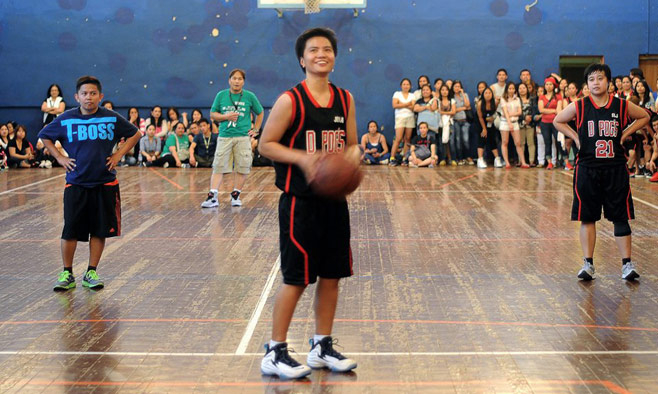 A woman playing basketball to a full house at a weekly sports tournament, held every Sunday in the summer.

Even when their documents are in order, some said as recent arrivals they gave in out of fear of being deported on trumped-up accusations.

Those who have lived in Moscow for longer are more defiant and said they refuse to pay up or avoid the confrontation by pretending not to understand the request.

Some of the workers feel they are at the whims of their employers in a country where their rights are not protected, especially for those residing in Russia illegally.

Valente-Hay spent four days in a pretrial detention center several months after arriving in Moscow in 2008 after her Russian employer, a cleaning agency, sued her for breaching her terms of employment, she said.

She said she had run away because she was being paid only a fraction of her stated salary for 14- to 16-hour workdays.

She was eventually cleared of all charges, she said, but the whole experience was rattling.

"I was scared of course. I lived [in a cell] with four other girls, I didn't speak Russian, I was very, very miserable. The only place to sit down was on the toilet," she says.

Lalunio, the consul general, said serious legal cases involving Filipinos were rare, with the embassy handling only one such case per year on average.

The relatively small size and obstacles to integration of Filipino workers here has led to the formation of a close-knit community.

"In Saudi Arabia or the Middle East, Hong Kong or Singapore there are a lot of Filipinos. They're anonymous, they don't know each other," says Lalunio.

"The feeling of being part of a family, of a community is gone, so everything becomes institutionalized. Here there is still a Russified version of events."

Migrants in Moscow are a source of income, not problems, because they come to the capital to work and don't receive benefits, Mayor Sergei Sobyanin told...
news

The Moscow city budget has earned 8.1 billion rubles ($127 million) from the sale of work permits to migrant workers and from income taxes paid by them...
news

Number of Migrants in Russia Down 20-25 Percent – Migration Association

Amid the plummeting ruble and tightening migration legislation, more migrants are leaving Russia in search of better conditions in other countries.
'Insufficient evidence'

Russian President Vladimir Putin likely decided to supply the missile that shot down Malaysia Airlines flight MH17 over Ukraine, but there is no realistic...