Is Russia adding fuel to the fire in Syria to make the oil-rich Middle East less stable and push prices up? Some people seem to think that is Moscow's the real cynical motivation in that sensitive region.

The Brent price traveled above $50 per barrel for several days in October, almost immediately after Russia launched air strikes in Syria.

The price jump provoked some observers to conclude that the bottom for oil prices was behind us and the world would soon see a new bonanza for producers and exporters. The expectation was short-lived.

Meanwhile, Syria has never been a major oil exporter. It plays no role in the global oil balance. Military activities in that country are not disrupting the steady movement of tankers to the market.

The main thoroughfare for almost one-third of oil that reaches consumers the world over is the Persian Gulf — located quite far from Syria.

Paradoxically, the involvement of some states in the region — such as Saudi Arabia and Iran — in the Syrian crisis makes the Gulf safer for tankers: The longtime adversaries are preoccupied with that war and have no time to waste on provoking each other close to the oil transportation routes.

Everybody in the Gulf is interested in the safety of those routes and will not endanger national profits from oil trade by engaging in some silly skirmishes.

Forget conspiracy theories that put the blame for low prices on the Saudis or Qataris: the sheikhs on the Arabian Peninsula and all OPEC members are suffering from low oil prices as much as anyone else in the oil exporting group. They are desperately trying to maintain traditional marketing niches by generous offers of discounts and keep pumping out extra volumes of crude oil regardless of sagging demand — and keep spending the funds they had accumulated earlier to continue their social programs. 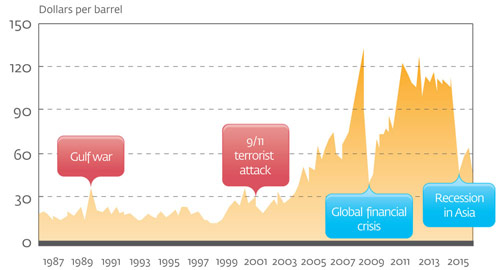 Oil Price and Global Shocks Since 1987

Iraq and Oman are pursuing the same strategy, and Iran is eager to join the race for winning the custom of oil consumers.

Meanwhile, the United States has become the "swing" producer of oil thanks to the shale revolution. The country's petroleum industry — and not OPEC — will be the chief regulator of prices from now on.

This does not bode well for Russia, where the breakeven price of a barrel is about $50, if LUKoil vice president Leonid Fedun is to be believed.

If the price stays below this level for a long while, oil companies will trim their investment programs, leaving hard-to-recover oil reserves underground — and such reserves constitute more than 70 percent of undeveloped Russian oil.

The decline of oil production in Russia — already envisaged in a draft governmental Energy Strategy Through 2035 — due to the imminent depletion of ongoing upstream projects will accelerate. In any case, the federal budget of the Russian Federation will get much less revenue than it was receiving when oil was priced at over $100 per barrel.

The Russian government responds by increasing the tax burden on oil producers. It is the wrong kind of medicine for the vital industry, which requires drastic structural reform and encouragement of small-scale and medium-sized private operators who are not scared of risks and innovations. The domination of huge and cumbersome state companies operated by incompetent bureaucrats is not a solution.

It all boils down to the prognosis of sustainably low oil prices.

Mikhail Krutikhin is a partner at the independent RusEnergy consulting agency.

NATO's new strategic concept codifies the alliance's statements and actions with regard to Ukraine.
opinion Michele A. Berdy

Sanctioning Russia's super-rich and seizing their property does not foment revolution against Putin.