As the Baltic states fret about perceived threats from neighboring Russia and their sizable ethnic Russian populations, Estonia's recently appointed foreign minister, Marina Kaljurand, is better placed than most to understand and address the issue: She is half Russian and half Latvian.

And as Estonia's ambassador to Moscow during a previous low in relations between the two countries — when the relocation of the Bronze Soldier, a Soviet war memorial, was moved to a military cemetery from the center of Tallinn in 2007, prompting riots in the Estonian capital — she is no stranger to the rifts between the two nations.

At the time she was hounded by the infamous pro-Kremlin youth group Nashi, whose activists attempted to prevent her leaving the Estonian Embassy building and produced posters accusing her of representing a "fascist country."

Yet recalling her time in Moscow, Kaljurand, who was appointed foreign minister in July, is phlegmatic on the events of 2007.

"The incident … just took maybe one week, a couple of weeks," she told The Moscow Times in a recent interview. "Of course the incident, or relocation of the soldier, had its implications, and it greatly affected our bilateral ties, including our economic ties and transit through Estonia, but altogether ambassadors are there to create relations, to have diplomatic channels open, and to talk to colleagues," she said.

Kaljurand had her first meeting as foreign minister with her Russian counterpart Sergei Lavrov on the sidelines of the United Nations General Assembly in New York last month. The first topic on the meeting's agenda was Eston Kohver, an Estonian security services officer jailed in Russia in August for espionage but recently returned to Estonia as part of a spy swap. Kaljurand told Lavrov the whole incident had been "deplorable," Estonian public broadcaster ERR reported.

Kohver, whom Estonia says was kidnapped by Russian security services and forcibly brought over the Russian border, was sentenced to 15 years in prison on Aug. 19 for espionage and other charges. He was released late last month in a spy swap on a bridge over the Piusa River in southeast Estonia.

"The abduction of a police officer from the territory of the native country: That's simply a violation of international law and human rights and it has to stop," said Kaljurand, adding that how the individual case was dealt with has wider geopolitical implications.

"This time it happened in Estonia. We can never be sure that the next time it wouldn't happen in any other country," she said.

The Kohver scandal and overall tension in relations with Russia prompted Estonia to announce plans recently for the country to start constructing a fence along its border with Russia. The primary aim would be "to cover the land border with 100 percent, around-the-clock technical surveillance to create ideal conditions for border guarding and to ensure the security of Estonia and the Schengen area," Interior Ministry spokesman Toomas Viks told Agence France Presse on Aug. 25.

Kaljurand suggested that protective measures may extend beyond a fence. "We are discussing what would be the proper measures of protecting our state border, whether it's going to be a fence or whether there is going to be more sophisticated technical equipment," she said.

While acknowledging that there are currently serious problems in relations with Russia, Kaljurand remains adamant that there is no military threat from her country's eastern neighbor.

"Provocations like the abduction of the Estonian police officer a year ago, violations of our airspace, there were military snap exercises close to our border: Yes, these things take place. But we respond to them, we follow them very closely, and we are ready," she said.

Her confidence in support from the West is unwavering.

"You're in a NATO country. The military you see in the streets: they're NATO military. We have allied troops on the ground in Estonia, we have air policing being conducted together with our NATO allies. So the deterrence measures are so visible," she said. "It's suicidal to try to attack any of the NATO countries." 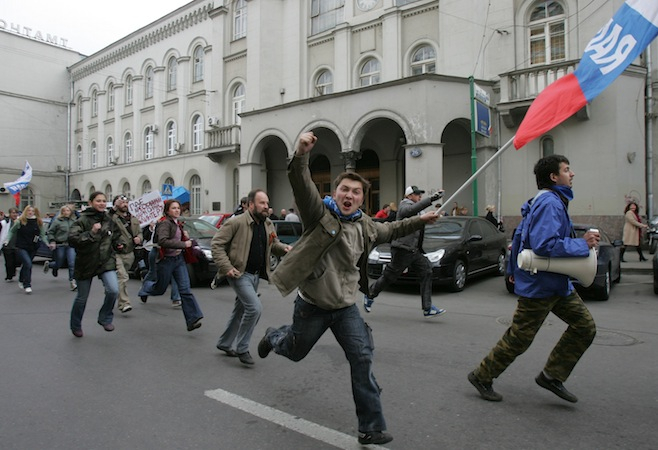 Kremlin-loyal protesters chasing after Kaljurand's car when she was Estonia's ambassador to Russia in 2007.

But others worry that Russian interference in Estonia might not just come in the form of an outright military invasion, but in stirring up unrest among the country's ethnic Russians, who make up about a quarter of Estonia's population of 1.3 million.

On Sept. 28, Estonia launched its own Russian-language channel, ETV+, with the aim of counteracting the nationalistic, pro-Kremlin message broadcast by state Russian channels, some of which are readily available in Estonia.

"We find it important because in the situation of Russia's propaganda — I call it propaganda — we need to have additional channels where the Russian-speaking population can get objective information, just facts," said Kaljurand.

"They are smart [enough] people … to make their own decisions and to decide who is right and who is wrong, but it is our obligation to provide possibilities from different sources, to learn about different facts from different events and so on."

While the channel is an acknowledgment of an integration breakdown at some level, Kaljurand insists it is not a clear-cut question.

"Maybe there are more different understandings among the Russian-speaking population because they are much more under the information sphere and influence of Russia. But at the same time you can see also that among Estonians there are different opinions," she said.

"But if your question is whether the Russian speaking population in Estonia wants to be part of Russia, then the answer is definitely no: All the public polls show that the Russians who are living in Estonia see Estonia as their homeland, and they benefit from the benefits of being permanent residents of the EU with the right to free movement and so on, so the answer is I don't see the division."

A political independent who has served in Estonian diplomatic offices around the world as ambassador, Kaljurand feels she has taken the opposite path to that of the majority of her current government colleagues, and says holding a key government position is "absolutely new" to her.

"I know more than an average politician about foreign politics, but at the same time I'm just learning how to be a member of the government," she said.

"So if politicians usually know that part, and start learning foreign politics, then I am doing it vice versa."

After her posting in Moscow, which ended in 2008, and some non-resident ambassadorial roles, she was appointed Estonia's ambassador to the U.S., after which she was asked to accept the position of foreign minister by Prime Minister Taavi Roivas.

"I do not belong to any political parties, but … it was not difficult for me to accept his proposal because I'm very close to the political views and values of the Reform Party," said Kaljurand.

"I'm a career diplomat," she said. "So at the moment I'm not a member of a political party. However, I don't want to exclude becoming a member of the Reform Party at some point," she added.

In an August poll conducted by TNS Emor market research company, Kaljurand was voted the favorite to succeed President Toomas Hendrik Ilves when his term ends next year.

But she refused to say whether it's a position she would run for.

"First of all of course it's a very pleasant surprise to see the polls and I see it as compliment to my work as an ambassador and diplomat, but at the moment I am determined to be Estonian Foreign Minister — as fully as I can be and for as long a time as I can be. I'm not going to speculate about anything," she said.