A Moscow court sentenced 20-year-old Russian climber Vladimir Podrezov to two years and three months in jail Thursday for “assisting vandalism” by taking part in an escapade last year when the spire of a landmark Moscow skyscraper was painted with the colors of the Ukrainian flag, the RAPSI legal news agency reported.

Four base jumpers, who parachuted from the skyscraper the same morning, were found not guilty of hooliganism and vandalism charges by Moscow's Tagansky District Court.

The four released by the court shouted with relief at the judge's unexpected decision while Podrezov smiled and remained silent as the sentence was read out, according to the MediaZona news portal, which focuses on human rights issues and controversial legal cases.

The stunt on Aug. 20 last year attracted international attention as it came at a time of heightened tension between Ukraine and Russia and was seen as a protest against Kremlin policies in the neighboring country.

The five "roofers" — a Russian term for extreme urban athletes and climbers — were named as political prisoners by human rights organization Memorial in April.

Ukrainian roofer Pavel Ushivets, also known as "Mustang Wanted," was the apparent instigator of the plan to paint blue the upper half of the enormous yellow star of the Soviet-era skyscraper on the Russian capital's Kotelnicheskaya Naberezhnaya so that it would resemble Ukraine's national flag. He also adorned the building with a real Ukrainian flag — and publicly claimed full responsibility.

Ushivets left Russia shortly after the stunt and returned to Ukraine, where he has been hailed as a hero. Kiev has said he will not be extradited to Russia to face criminal charges. 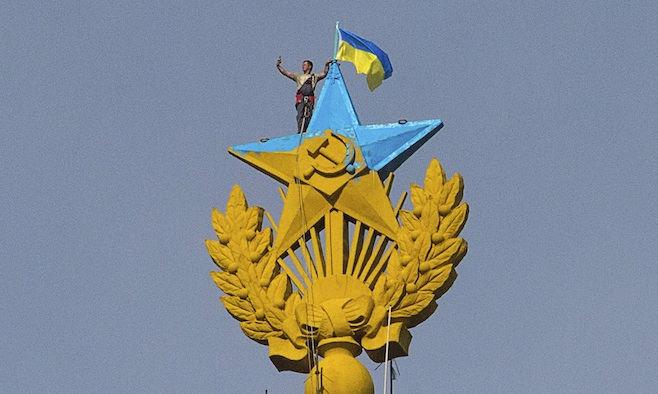 A man takes a "selfie" as he stands with a Ukrainian flag on top of one of Moscow's so-called "Seven Sisters," which was also painted in Ukrainian colors.

Four roofers, including Podrezov, on trial in Russia faced up to seven years in prison on charges of vandalism and hooliganism motivated by hatred on political grounds, and prosecutors recommended last month that each be given three years behind bars. Prosecutors sought a three-year suspended sentence for the fourth base jumper Anna Lepeshkina, who is currently pregnant.

Podrezov has been held in pretrial detention since his arrest on Aug. 27 last year, which means he will be eligible for early release in a little over two months. His lawyer, Olga Lukmanova, said Thursday he will appeal the sentence, RAPSI reported.

While Podrezov admitted in court he helped Ushivets, who traveled to Moscow for the stunt, onto the roof of the skyscraper, he denied foreknowledge of the painting of the star.

The four base jumpers — Alexander Pogrebov, Alexei Shirokozhukhova, Yevgenia Korotkova and Lepeshkina — were arrested in August last year shortly after the stunt but — unlike Podrezov — were detained under house arrest. They maintained they did not know about the painting plans and jumped from a point significantly lower than the star.

Electronic tags used by police to keep track of their whereabouts were to be removed Thursday, the RIA Novosti news agency reported.