It’s summertime, which means that you can enjoy doing a lot of things outside that you usually do inside — like watching a movie, for example.

You don’t have to sit in a stuffy, crowded space banging your knees against the seat in front of you and spilling your bag of popcorn every time someone’s cell phone starts ringing. You can sit in the open and delight in watching a movie under the stars.

Here are five of our favorite places to catch a movie outdoors this month — and one extra one for this weekend. Some of the films are in Russian, but you might find that the relaxed ambiance aids comprehension.

This was the first outdoor cinema in the city, made not just for showing movies, but for educational lectures too. This month, Gorky Park has teamed up with the journalism department of Moscow State University to bring viewers a variety of movies for every taste. The wooden bleacher seating is not entirely comfortable, but the staff hands out pillows and blankets at the entrance to keep top and bottom warm and cozy on cool nights. Among the offerings are “Pixels,” “Acceleration,” and “Mission: Impossible — Rogue Nation.”

This outdoor theater has a sail-like tent roof and good views from the bleacher seating (cushions provided). They have a varied program of foreign and Russian films, both feature films and documentaries, and sometimes turn the theater into a dance hall for real-life entertainment. 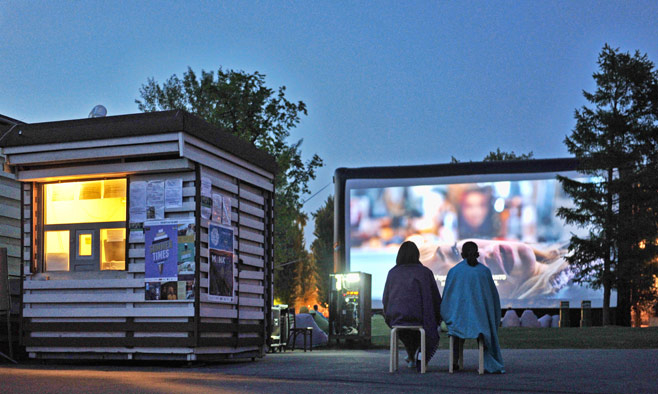 The Muzeon Summer Cinema theater has a big screen, soft comfortable cushions and colorful blankets — everything you could want for a movie night. The 2015 summer program is showing first-run movies, nominees and winners from major international film festivals, independent American films, animated films from Europe and Asia for children and adults, advertising festival shorts, and much, much more. Most of the films are shown in the original language with Russian subtitles. This is terrific for the English-language Oscar nominated animated film “Song of the Sea” playing this Friday at 10 p.m. and 11:30 p.m., but perhaps not so terrific for the Farsi-language Iranian film “Taxi,” winner at the Berlin International Film Festival, which will be shown on Sunday at 10 p.m. and 11:30 p.m.

This is the only silent movie theater in Moscow — viewers wear headphones so as not to disturb other folks relaxing in the park. You can sit on bean-bag poufs and sun loungers at no extra cost, or you can set up a comfortable place for yourself on the lawn. One of the unusual features of the theater is its amazing inflatable screen, which is something of an art performance in itself.

The Strelka Institute has the largest outdoor theater in Moscow with a capacity of 1,000 seats — which is good because their movie program is so compelling, it is likely to be filled up to the stars every night. This summer they are holding a “Time Machine” festival of sci-fi films from various countries and eras — all in the original language with Russian subtitles (if not in Russian). On Aug. 11 you can see Woody Allen’s “Sleeper” at 10 p.m.

This Friday Google and the Moscow Art Theater are preparing for their marathon reading festival, “Chekhov Is Alive” by  showing a 1977 Russian-language film called “Funny People” based on several stories by Anton Chekhov. The fabulous script, direction and acting are a great way to prepare for your reading audition.