Russian authorities solved 93 percent of all open murder cases in the country during the first six months of 2015, head of the Investigative Committee of Russia Alexander Bastrykin said on Friday. The announcement, published on the official site of the organization, was made during an extended meeting of the board of the committee.

“Our concerted effort jointly with other law enforcement agencies bears its fruits. The solvency rate for murders has reached 93 percent, for cases of grievous bodily harm with intent — 92 percent, and for cases of assault — 97 percent,” Bastrykin said according to the site. The official was also quoted saying that the number of murders had dropped by 4 percent during the first half of the year.

According to the Investigative Committee site, Bastrykin mentioned the murder of Russian opposition figure Boris Nemtsov among the Investigative Committee's success stories. The authorities were able to solve the case quickly thanks to the cooperation of the security services and the Ministry of Internal Affairs, Bastrykin said, thus curbing speculations surrounding the murder. As previously reported by The Moscow Times, two men, Dadayev and Anzor Gubashev, were arrested and charged with murder of Nemtsov after he was shot dead on the Bolshoi Moskvoretsky Bridge near the Kremlin last February. 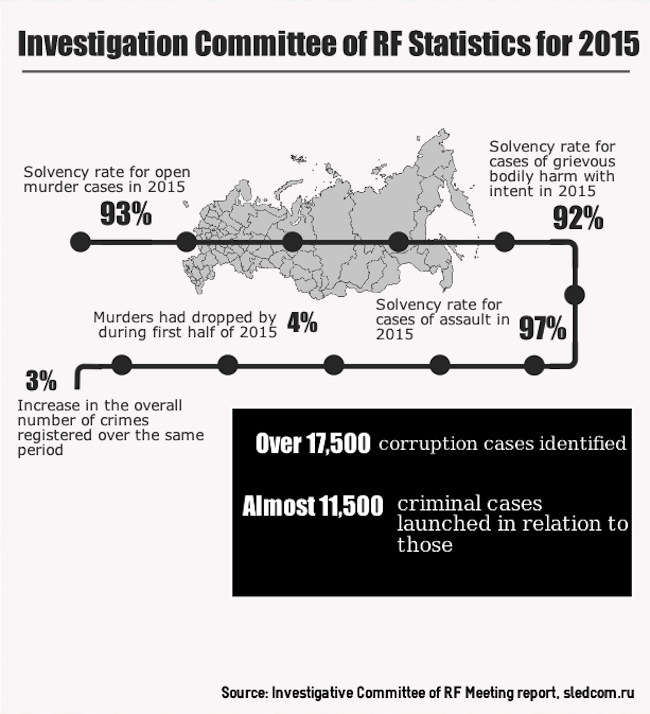 Nemtsov supporters have expressed concerns regarding the investigation of the case, however. During an interview with Reuters last March, Russian opposition leader Ilya Yashin accused the authorities of not going far enough in their investigation. “The key task for investigators is to find and prosecute the ones who ordered this murder. If everything ends with the detention of scapegoats, irrespective of whether they are the real assassins or not, the practice of political assassinations will continue with no doubt,” Yashin was reported as saying.

In his comments to the committee, Bastrykin did concede that a 3 percent increase in the overall number of crimes committed in Russia had been registered over the same period. As recently noted by The Moscow Times, an increase in the number of shoplifting cases has been recorded across the country during the past year. In June, news site Meduza published a report highlighting a growth in the number of crimes in the regions bordering eastern Ukraine. The site linked the phenomenon to the return home of Russian volunteers who had been fighting alongside separatists in the Lugansk and Donetsk regions.

Bastrykin's announcement follows the publication of an extensive interview he gave to government daily Rossiiskaya Gazeta on Thursday, during which he suggested removing from the Russian Constitution the clauses establishing the primacy of international law over national legislation.