With his recent appointment to Moscow, Grum Abay Teshome, Ethiopia's ambassador to Russia, has come full circle. Educated in Leningrad in the 1980s, the seasoned diplomat has returned to the country of his alma mater to energize its relations with Ethiopia.

"I'm back again," Grum told The Moscow Times during an interview at the Ethiopian Embassy earlier this month. "That's what I told President [Vladimir] Putin the other day at the credentials ceremony. I also told him I had studied in his hometown of Leningrad. He was happy about that."

Grum, 54, was one of the 24,000 Ethiopian students who benefitted from scholarships to study in the Soviet Union. With no prior knowledge of Russian, he set off for the Moldovan capital of Chisinau to learn the language and familiarize himself with the subjects he would later study at Leningrad State University, known today as St. Petersburg State University. He graduated with a degree in political economics in 1985, before returning to Ethiopia to join the foreign ministry.

Grum returned to Russia on official business a few times after completing his studies in Leningrad, taking note of the profound transformations the country has undergone since the 1980s.

St. Petersburg, the city of his alma mater, was making headlines a decade ago for a shocking series of fatal attacks on foreign students, including black people. He said he never encountered racism during his time in the Soviet Union, where he lived among students from a wide range of backgrounds.

"The Soviet Union offered its students and those from the outside a sense of internationalism," he said. "People got along together, they knew each other well. They [Soviet students] studied a lot and wanted to learn about the outside world. I don't think this is as much the case now."

Grum said racism is a new phenomenon in Russia that emerged in the 1990s. During that turbulent decade, the country's youth was marred by social problems and often struggled to imagine a future for itself.

"As in every other place, when you have social problems, people look at the different guy, the outsider," he said. "I think that a person who has a job and a meaning to his or her life will not go around victimizing people."

The ambassador has also seen Russia's relations with Ethiopia lose some of their vigor through ideological transformations and changing circumstances.

Ethiopia, which established diplomatic relations with Russia in 1898, has always perceived Russia positively, Grum said. The Russian empire had provided medical assistance to Ethiopians wounded in the 1895-96 war against Italy, which had made claims over the independent eastern African state.

A hospital established by the Russian Red Cross, the Dejazmach Balcha Memorial Hospital, still functions to this day in the Ethiopian capital of Addis Ababa.

The countries' ties grew stronger after Ethiopia's long-standing leader, Emperor Haile Selassie I, was dethroned and replaced with a Marxist military government in 1974. The Ethiopian authorities' socialist orientations appealed to the Soviet Union, which offered them financial and military support. Ethiopian students like Grum flocked to the Soviet Union on full scholarships.

Today, Grum said there are only eight Ethiopians studying at the Peoples' Friendship University in Moscow, an institute that built its reputation on educating students from developing nations. There are 163 Ethiopians and Russian citizens of Ethiopian origin living in Russia, he said.

The ambassador said that Ethiopia's development of higher learning institutions and Russian universities' reluctance to offer full post-graduate scholarships that match Ethiopia's interests have hindered cooperation in the education field.

"The relations we have today do not reflect the traditional historical ties we have always maintained," he said. "We really have to upgrade the level of political dialogue we have with the Russian government." 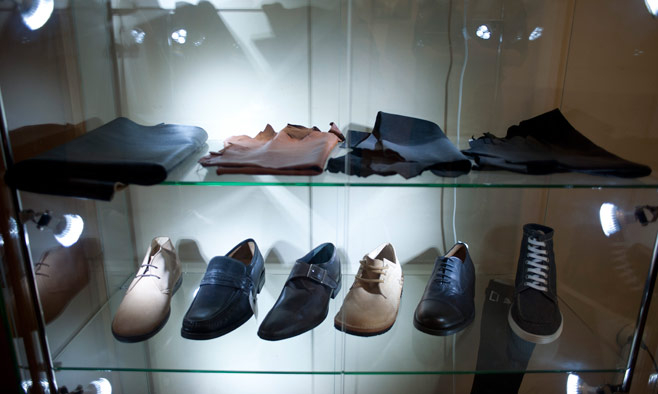 Leather goods on show as examples of Ethiopian exports at the embassy.

Although Russia and Ethiopia cooperate on a range of regional and global issues, their bilateral relations have stagnated. Among the 35 Russian companies that have been issued licenses to invest in Ethiopia, only two are operational, the ambassador said.

"We feel that Russia is lagging behind [in terms of seeking business opportunities in Ethiopia]," he said. "I think that at the end of the day, they will be losing out."

Ethiopia is massively investing in infrastructure, building roads and railways, as well as dams to fulfill its energy demands. Its goal is to transform its agriculture-based economy into one focused on manufacturing. The Ethiopian economy — which experienced an annual average of 10.8 percent growth over the past decade, according to the World Bank — is broad based and not exclusively supported by the extraction of oil and other mineral resources.

Grum said Russia should take advantage of the positive disposition of Ethiopians and the Ethiopian government toward Moscow.

Ethiopia was among the 58 countries that abstained from voting on a United Nations resolution on the sovereignty of Ukraine in March 2014, following Russia's annexation of Crimea.

"We believe that people of every country have the right to decide their own future," he said. "And nobody should have anything to say about that."

Relations between the countries' defense ministries remain cordial, as during the Soviet era. Defense relations, once centered around Ethiopia's purchasing of Soviet military equipment, have become more focused on technology transfers and training programs, according to the ambassador.

Russia and Ethiopia have an intergovernmental commission on economic, scientific, technical and trade cooperation, and Ethiopia's minister for foreign affairs may come to Moscow this fall to take part in political consultations with the Russian government.

Grum, who has also served as his country's ambassador to Italy and at its diplomatic mission in Brussels, only sees opportunity in his new mandate.

"There are a number of commonalities in the way Russians and Ethiopians think," he said. "We have a relatively conservative society. We don't like people interfering in our internal business. We are very proud of our history. And we appreciate strong leadership."