Contribute Today
By Matthew Bodner
May 8, 2015

The early fruits of Russia's massive military buildup will be proudly displayed on May 9 as the centerpieces of the Victory Day parade, which this year marks the 70th anniversary of Nazi Germany's defeat in World War II.

Vintage 1940s hardware will parade alongside top-of-the-line equipment, some of which has not yet even entered serial production, in a ritualistic show of force that dates back to the days of Soviet leader Joseph Stalin.

The new tanks and armored vehicles to be formally unveiled on May 9 were developed under a staggering 20 trillion ruble ($395 billion) 10-year rearmament campaign announced in 2010. During Putin's live call-in on April 16, he promised that by the end of the decade 70 percent of the equipment fielded by Russia's military will be new hardware.

Not much is known about the new vehicles to be shown at the parade, which are some of the first new designs to come out of the rearmament program. Defense contractors and officials have kept their new blueprints mostly to themselves, with only a few leaked images and details making it into the Russian press before rehearsals for the parade began at the end of April.

To help parade-goers pick out the new from the old, the Moscow Times has written up a list of the top 5 new vehicles to be showcased this year. 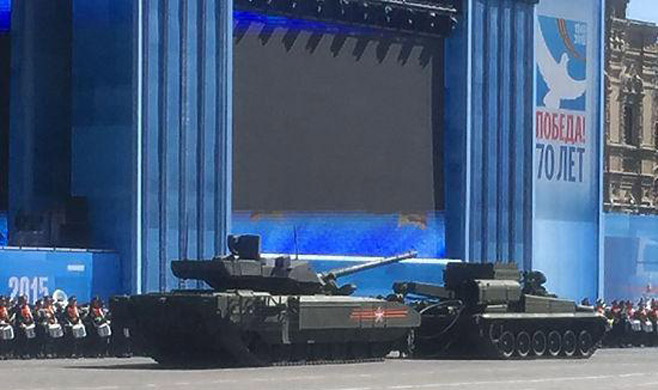 The star of the show is sure to be Russia's newest piece of heavy armor — the Armata T-14 main battle tank.

Of all the new vehicles, this one has been kept under the tightest secrecy, with only a handful of amateur photos of the tank finding their way onto the internet.

The Armata has two distinguishing features that might help parade watchers spot the vehicle.

The first is the number of wheels powering its tracks. Older Russian tanks have six wheels on each side, while Armata has seven.

The tank is built on a chassis known as the Armata Universal Combat Platform, which manufacturer UralVagonZavod says will serve as the common base for a series of armored military vehicles, such as armored personnel carriers and even a driver-less drone tank.

Russia's rearmament program will see the replacement of the iconic Soviet BTR-80 with a new armored personnel carrier known as the Boomerang.

The Boomerang is still about two years away from serial production, but it will take part in this year's May 9 parade.

Parade watchers can spot the new Boomerang vehicle by looking for an armored car with four wheels on each side. Unlike the BTR-80, the Boomerang's gun turret is situated toward the back of the vehicle.

The primary function of the Boomerang is to transport soldiers into areas under fire from enemy troops. Its armor can withstand a tank hit, and it comes equipped with machine guns, anti-air missiles, and anti-tank weapons, according to Zvezda, the Russian Defense Ministry's television station. 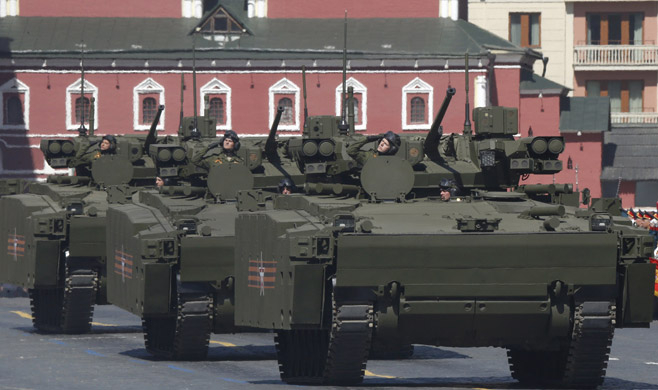 One of the more unique looking vehicles set to be unveiled during the parade is the Kurganets-25 infantry fighting vehicle (IFV) — a class of armored vehicle invented by the Soviets during the Cold War to provide soldiers with heavy fire support after transporting them into combat.

The Kurganets-25 is also amphibious, meaning it can traverse bodies of water. Video of the Kurganets shows that its weapon's turret, like the Boomerang, is situated toward the rear.

With heavier armor and weapons than an armored personnel carrier, Kurganets can be recognized as a large green box on tank treads. 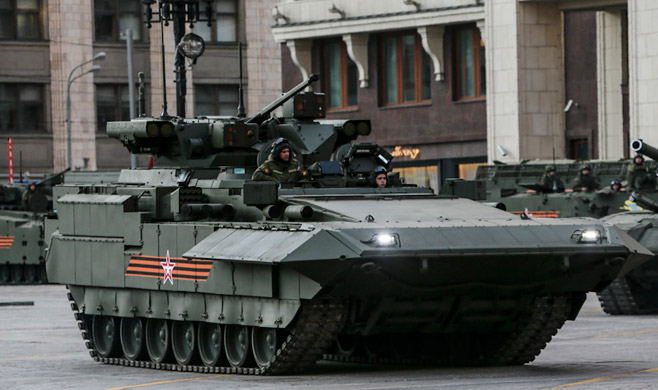 Perhaps the most interesting new vehicle to join the festivities will be the T-15 heavy infantry fighting vehicle.

The T-15 has a leg up over other Russian-made IFVs in that it is caked in the Armata's state-of-the-art armor protection, which is reported to consist of three layers. The turret, situated toward the rear of the vehicle, is controlled remotely by the crew from their isolated compartment in the front of the IFV.

Parade goers should look for a tank-like vehicle with 7 wheels powering its treads, but with an angular protrusion toward the front, which resembles a battering ram. 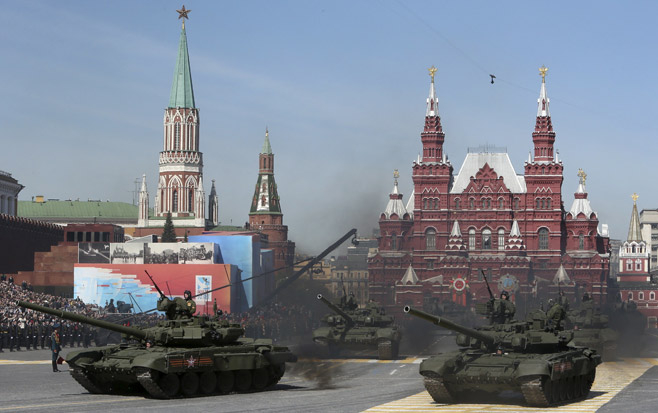 
A brand new piece of self-propelled artillery will also parade on Red Square on May 9th.

Known as the Koalitsiya, the new gun can be identified by it highly angular turret.

According to television station Zvezda, the Koalitsiya's gun has a range of 70 kilometers.

One of Russia's brand new Armata T-14 heavy battle tanks, said to be the finest tanks in the world, appeared to break down on Red Square Thursday during...
news

Is Russia's New Armata Tank the Best in the World?

Russia's new battle tank, the Armata T-14, will surely steal the show on Saturday during Moscow's celebration of the 70th anniversary of the Soviet...
news