When about 200 protestors gathered Saturday in Moscow to mark one year since 48 people were killed in Odessa during street battles between pro-Russia and pro-Ukraine activists, there was little sadness on display.

The atmosphere was one of hate, anger and aggression.

Clashes in the Black Sea port city last year culminated in a deadly fire in a Soviet-era Trade Union building where dozens of pro-Russia activists were barricaded.

"Is it considered normal to burn people alive?" asked Evgeniy Mazanko, an activist with marginal Russian nationalist organization the National Liberation Movement who was at Saturday's rally.

Speakers addressing the crowd outside the Ukrainian embassy railed against "fascists," attacked the United States for what they described as its role in fomenting unrest in Ukraine and vowed they were ready to "liberate" Kiev from the "Nazis" just as the Soviet army liberated the city in 1943.

"It's painful for me to watch Ukrainian leaders, puppets of the West, committing genocide against their own people," said David Torusyan, a Russian-speaking Greek citizen carrying a Greek flag.

The violence in Odessa on May 2nd last year has become a pivotal moment in an official Russian narrative of events in Ukraine since the toppling of President Viktor Yanukovych in February 2014.

Portrayed as the deliberate killing of innocent protesters by neo-Nazis, it has become a rallying cry for Russian volunteers fighting against Kiev troops in a separatist uprising in the country's east. Comparisons between the current confrontation and the battle against the Nazis in the 1940s are common.

Events in Odessa a year ago amounted to "the torching by neo-Nazi Banderites of unarmed people," the Russian Foreign Ministry said in a statement Friday. The term banderite stems from the name of Ukrainian nationalist leader Stepan Bandera, who fought the Soviet army and was imprisoned by the Nazis during the Second World War. 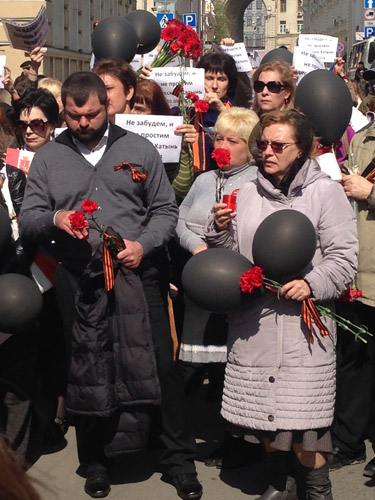 Protesters marked one year since the Odessa fire in Moscow on Saturday.

State-owned Russian television channels devoted large amounts of airtime to the anniversary of the May 2nd events over the weekend, speculating about an official cover-up, the use of poisonous gas and the alleged garrotting of a pregnant woman by pro-Ukraine activists.

Little proof exists to support the Russian version. The fire on May 2 started as both sides were throwing Molotov cocktails, and no evidence has ever been publicly released that would suggest Ukrainian officials planned the deaths of pro-Russia activists. Violence began that day when armed pro-Russia activists, shielded by police, attacked a demonstration in support of a united Ukraine.

Prominent Russian journalist Timofei Dziadko, who was jostled by the crowd at the Saturday demonstration after asking a question about the link between Odessa and the conflict in eastern Ukraine, said pro-Kremlin media was responsible. "The aggression is the result of the dumbing-down of the population," he said in written comments.

Whatever its inconsistencies, the narrative of events recounted by Russian officials and state-owned media has gained widespread traction and helped generate recruits for separatists fighting in eastern Ukraine.

A Russian tank driver badly injured in bloody fighting around the Ukrainian town of Debaltseve earlier this year told the Novaya Gazeta newspaper in March that seeing events in Odessa unfold on television had been a key reason behind his decision to go and fight against the Ukrainian army.

At the rally on Saturday, where participants also held candles and released black balloons, programmer Viktor Gushin said that he had come to Moscow, his home city, on a few days holiday from his new job working for the Communications Ministry in eastern Ukraine's self-proclaimed Donetsk People's Republic.

"Odessa was the start of the aggression of the Anglo-Saxon world against my country," he said.

The article contains graphic content which may be disturbing to some readers. An anti-mobilization activist was hospitalized in Moscow after his associates...
'military operation'

Annexation polls organized by Kremlin-installed authorities in four regions of Ukraine mostly controlled by Russian forces were due to close Tuesday, with...
Russian citizenship