As Russia grapples with plunging oil prices and Western sanctions, attention is focusing on a $74 billion National Wealth Fund used to help the country weather crises.

The NWF was used heavily in 2009 to fund emergency measures for banks and companies during the economic downturn, and it has been tapped in recent months to help firms cope with sanctions imposed over the Ukraine conflict — leading some to dub it an "anti-crisis fund."

Last week, Russia announced a $35 billion "anti-crisis" spending plan to help the economy. But conflicting government statements have sown confusion about how exactly Moscow will finance the new measures as the country heads for recession and companies struggle to refinance their debts.

Economy Minister Alexei Ulyukayev has said the NWF will not be used to finance the plans — yet Finance Minister Anton Siluanov has said they will not add to budget costs.

What is clear is that Russia's ability to dip into its nest-egg further is limited. Almost half of the Fund is already committed to domestic projects and companies — close to a 60 percent cap that limits investments within Russia.

What is the National Wealth Fund?

The NWF was set up in 2008 when Russia split up its Stabilization Fund, a rainy-day fund financed from oil taxes, into two components.

One part, the Reserve Fund, is intended to fill holes in the budget should the oil price fall. It will now be needed to do just that as Russia faces a huge budget shortfall.

That leaves the NWF, which has 5.1 trillion rubles ($74 billion) of investments. Most of it is in foreign securities, but there are now plans to reinvest much of that at home.

Although officially designated to provide long-term support for the state pension system, Russia has already been dipping heavily into it for other purposes.

Last year the government approved a plan to spend up to 60 percent on domestic investments in infrastructure and banks, raising a cap from 40 percent.

Siluanov said last September that Russia did not plan to raise the 60 percent cap further, as this would break into Russia's "strategic reserve."

The remainder of the Fund is invested abroad in hard currency assets, mostly low-risk bonds of Western governments. 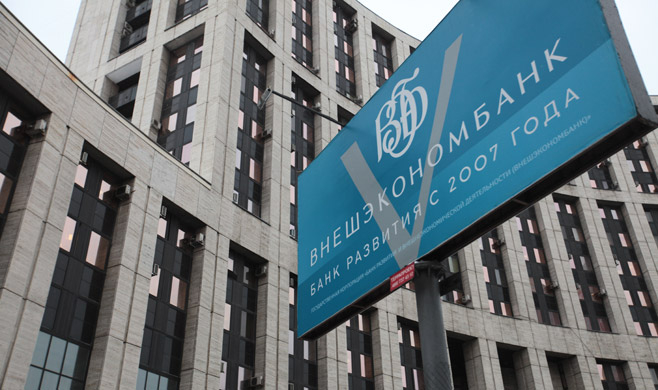 A board advertising VEB bank (Vnesheconombank) is pictured outside its office in Moscow.

During the previous crisis of 2008-2009, state development bank VEB became the main conduit for channeling financing to banks and companies. Many of those programs remain in place.

The NWF also has $6.25 billion invested in VEB in dollars, including $6 billion used to boost the bank's capital.

Support for Other State Banks

In December 2014 the NWF invested in the equity of three state-controlled Russian banks — VTB, Gazprombank and Rosselkhozbank — which had approached the government for help after being targeted by Western financial sanctions.

Those shares are now worth 279 billion rubles, according to Finance Ministry data. In addition, the NWF made a 100 billion ruble 30-year subordinated deposit to help VTB.

In December 2013 the NWF was used to acquire $3 billion in Ukrainian Eurobonds, as part of a loan that Russia extended to Ukraine under its former, pro-Russian president, Viktor Yanukovych. The bonds are due for redemption in December.

Russian officials have said that Ukraine is in violation of its loan agreements, raising the possibility that Russia could demand the money back early. However, President Vladimir Putin has said that Russia does not intend to do this as it would cause Ukraine's financial collapse.

In June 2014 the government approved the use of up to 290 billion rubles from the NWF to finance Rosatom, the state's nuclear energy corporation. The earmarked funds include 150 billion rubles to build a nuclear power plant in Finland.

The government has recently approved 150 billion rubles from the NWF for upgrading the Trans-Siberian railway and the Baikal-Amur railway. Another 150 billion rubles has been assigned to Yamal LNG, a liquefied natural gas project operated by sanctions-hit gas producer Novatek. The Central Ring Road around Moscow will receive 75 billion rubles.

The latest plans also include an additional 250 billion rubles from the NWF that will be used to boost the capital of state-owned banks VTB and Gazprombank. The cash is tied to the banks' lending helping fund infrastructure projects such as railways. 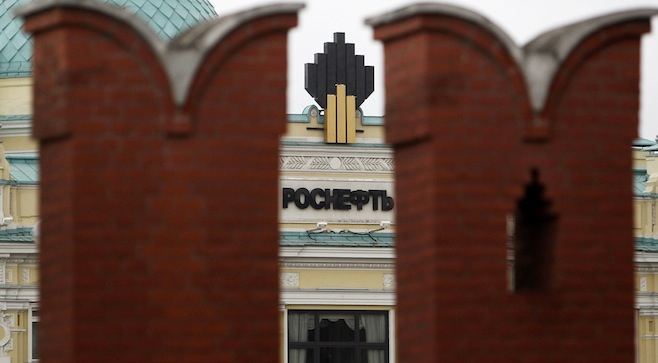 The logo of Russia's top crude producer Rosneft is seen at the company's headquarters, behind the Kremlin wall, in central Moscow.

Under Discussion, But Not Approved

A $35 billion anti-crisis plan drawn up by the government in January penciled in an additional 300 billion rubles for VEB, earmarked for increased lending to the non-banking sector. However, the government has yet to back the release of NWF funds, raising doubts about whether this will happen.

State-owned oil company Rosneft has requested 1.3 trillion rubles in NWF to help it weather Western sanctions. It had earlier requested 2.4 trillion but lowered the demand after raising 1 trillion from bond issues. Putin has said that support for Rosneft is possible. However, other government officials have cast doubt on the idea given the huge sums involved.

Besides the handful already approved, several other infrastructure projects have applied for NWF cash. These include an industrial cluster in the Krasnoyarsk region, a Moscow air hub, and more cash for the Central Ring Road around the capital.

Russia will create a multi-billion dollar anti-crisis fund in 2015 of money destined for the Pension Fund and some left over in this year's budget...
news

A Russian company has offered a cash bounty of up to 5 million rubles ($71,648) for the destruction or capture of Western-made tanks recently promised...