Ibragim Ishankulov stands on platform No. 1 of Moscow's Kazansky railway station, waiting for the Moscow-Dushanbe train to depart, his hands stuffed into the pockets of his faux leather jacket. Damp cardboard boxes and bulging nylon woven bags containing his possessions are heaped at his side. Handshakes and goodbyes abound, but there are no see-you-laters.

Like many Central Asian migrant workers, Ishankulov, a 40-year-old locksmith from Tajikistan, is leaving Russia on a one-way ticket. The dramatic devaluation of the ruble has coincided with the implementation of draconian migration regulations, making the inhospitable conditions migrants face in Russia no longer worth their while.

Double-digit inflation and a ruble that has lost half its worth, combined with a drastic increase in right-to-work fees and new legislation requiring migrants to enter and leave the country on an international passport, have led migrant workers, who often work as workmen, janitors or repairmen, to stream out of Russia.

The head of Russia's Federation of Migrants, Mohammad Amin, said in December that more than one quarter of the country's migrant workers were planning on leaving Russia because of the economic situation and stringent bureaucratic requirements.

More than 178,000 Tajik nationals left Russia in the second half of 2014, RBC newspaper reported Wednesday, citing data from the Federal Migration Service (FMS). Nearly 365,000 Uzbeks left the country during the same period, the report said. The FMS recorded that there were about 100,000 Tajiks and 2.2 million Uzbek nationals in Russia as of last month.

In addition to the exodus of migrant workers from Russia, new arrivals have also dramatically decreased in number, apparently deterred by the new economic and bureaucratic conditions. FMS head Konstantin Romodanovsky told Russian media that 70 percent fewer migrants had entered the country in the first week of January compared to the corresponding week in 2014.

"Either we go home or we work in Russia for free," said 22-year-old Amirdin Yarkuluf. "Things were alright until this year."

At the opening of a new migration center last week where migrants should be able to fulfill the many requirements demanded by Russia under one roof, Moscow Mayor Sergei Sobyanin claimed the new fees would finance social services for migrants and support city programs for Muscovites.

The staggering hike, he said, had succeeded in driving migrants out of the capital.

Moscow authorities appear to be congratulating themselves on the mass exodus of migrant workers.

"The latest data have shown migrants are leaving," Sobyanin said, flanked by Romodanovsky, the FMS head, who nodded approvingly. "This might stem from the economic situation but mostly from the financial regulations."

In order to work in Russia, migrants have to undergo a battery of medical examinations, sign up for yearly medical insurance that costs 5,500 rubles ($80), be fingerprinted and register with migration authorities. Since Jan. 1, they have had to take a 3,000-ruble ($44) Russian-language and history test, a requirement Karomat Sharipov, head of Russia's Tajik Labor Migrants association, said was unrealistic given the general nature of migrants' work.

"What does Sobyanin want? He's right to say that the Russian people, Russian society, Muscovites are tired of migrant workers. I agree," Sharipov told The Moscow Times. "But has anyone asked Muscovites who is going to do the migrants' work? For Mr. Sobyanin's markets to exist, you need to send 12,000 workers over there [to the Sadovod and Lyublino markets]. The Tajiks, Kyrgyz and Uzbeks are the only ones doing this kind of work."

Moscow authorities commended the new center, which is located 50 kilometers outside the Moscow Ring Road. City Hall's online statement praised the center's remote location, saying it had been built "far from large populated areas and public facilities" in an effort to assuage Muscovites' "discomfort" with migrants.

The new center's opening coincides with the end of operations at a migration office in the Bibirevo neighborhood of northern Moscow. Authorities had received complaints that the presence of large numbers of migrant workers at the office had created an "uncomfortable" atmosphere for locals, City Hall's statement said.

A survey conducted in 2013 by the Levada Center, an independent pollster, revealed that 69 percent of Russians think there are too many migrants living in their region or city. The same poll showed that some 84 percent thought that a strict visa regime should be introduced for migrants from Transcaucasia and Central Asia. 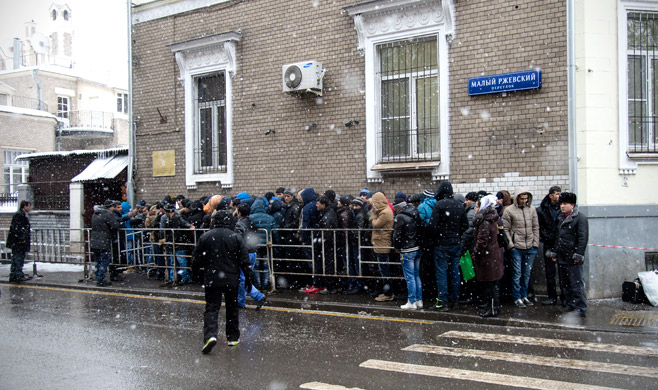 Tajik nationals standing in line outside their Moscow embassy to obtain the documents they need to leave Russia.

Tajik migrants are on the front lines of Russia's crackdown on foreign workers. More than 200 Tajik migrant workers stand in line at a time outside their embassy's consular division in Moscow's biting cold, waiting for hours — and sometimes days — to obtain the documents required to leave Russia.

The line is buzzing with dissatisfaction. A bundled baby wails, a burly man bullies his compatriots, a security guard shoves the migrants into single file. A policeman ignores their questions, replying with dismissive gestures rather than words.

"Why don't they just let us go home?" asks Muhammad Amin Saidiyev, who does live-in home renovation work in the Moscow region, waiting in line. "If they make a law like this for those who want to come here, OK. But those who entered Russia on an internal passport should be able to leave on the same document. This is not a real law because it's cruel."

Since 2005, Tajiks have been able to enter Russia on their internal Tajik passports, the equivalent of a national identity card. Last June, Prime Minister Dmitry Medvedev signed amendments to migration regulations for Tajik nationals, requiring them to obtain an international passport to enter or leave the country starting this year. The law also requires them to provide proof they will return to their home country after their stint in Russia.

The same requirement was imposed on people from all other CIS countries except Belarus, Kazakhstan and Armenia, the other members of the Russia-led Eurasian Economic Union.

Russian authorities have presented the move as a method to curb drug trafficking and contraband. Viktor Ivanov, head of the Federal Drug Control Service, said in 2013 that the international passport requirement for people from CIS states would cause a "thirtyfold" increase in the effectiveness of Russia's efforts to prevent Afghan narcotics from seeping into the country, the TASS news agency reported at the time.

Migrant workers interviewed by The Moscow Times said their embassy was simply overwhelmed by demand, causing lengthy delays in the processing of their application. A Tajik workman said he had been coming to the embassy's consular division regularly for more than three weeks but had been unsuccessful in submitting his application, caught in an interminable line.

The Embassy of Tajikistan in Moscow declined to comment on the situation.

The ambassador of Tajikistan to Russia, Imomiddin Sattorov, said in an interview with "Russia For All," an online news portal aimed at migrants living in Russia, that his country had received guarantees that his compatriots could "work and live without a problem" until their departure from Russia  — on the condition their documents were in order.

Zavkibek Shono stands across the street from the consular division of the Embassy of Tajikistan, observing the shoving and pleading through thick cataracts. The wizened 48-year-old has been working as a plumber in the city of Podolsk in the Moscow region, earning 30,000 rubles ($438) a month, the equivalent of the average Russian's monthly salary. But Shono is just not making enough to support himself and the many mouths he has to feed.

"I send money home to my four children, my wife and my grandson," Shono said. "I'm the only one who supports the family. I'll have to find a job over there [in Tajikistan]. I can work in my country for the same money now."

Remittances accounted for 52 percent of Tajikistan's gross domestic product in 2012, making it more dependent on migrant workers sending their salaries home than any other country in the world, according to the World Bank. About 80 percent of Tajik households regularly receive remittances from abroad, according to the International Labor Organization, and remittances accounted for some four billion dollars entering the country's economy in 2013.

Half of working-age Tajik men are making a living abroad, according to estimates published by the World Bank. In 2010, more than 93 percent of Tajik males working abroad were employed in Russia, the International Labor Organization reported.

Other former Soviet republics with many nationals employed in Russia are also heavily reliant on remittances. They account for 31 percent of Kyrgyzstan's GDP, 25 percent of Moldova's and 21 percent of Armenia's, according to World Bank figures.

The sleeping cars of the Moscow-Dushanbe trains reek of a pungent mixture of urine and sweat as it stands idle in the station before setting off on the four-day journey to the capital of Tajikistan. Mothy fleece blankets are stacked in overhead storage, yellowed curtains obscure the fogged windows.

"You see, the cars are warm," a train attendant said, flashing a grin.

Despite the current problems, Ishankulov is not giving up on Russia for good just yet.

"Let's see what happens. Maybe we can come back," he said. "I hope so. I have a large family to feed."

Number of Migrants to Russia Drops 70 Percent in New Year

The flow of migrants to Russia has fallen 70 percent over the first week of January compared with the same period last year, the head of Russia's Federal...
budget woes

Russia could increase taxes for the first time since the invasion of Ukraine to help plug a hole in the state budget, independent media outlet The Bell...
execution claims