A young businessman accused of being a front man for former Ukrainian president Viktor Yanukovych made $100 million or more from buying Russian gas at a preferential rate and selling it on at higher prices, according to a former senior employee.

Serhiy Kurchenko, 29 years old and a self-declared billionaire, made the money by selling cheap gas supplied by companies run by Dmitry Firtash, a prominent Ukrainian oligarch. Firtash has long-standing business connections to Russia and his companies were able to buy gas cheaply from Gazprom, the giant gas company run by allies of President Vladimir Putin.

Some Ukrainian politicians and gas industry experts, briefed on the transactions, said they believe the deal was a way for Firtash to reward former president Yanukovych for political favors that had benefited Firtash's business empire. Profits from the arrangement were destined for Yanukovych, they allege.

"Everybody in Ukraine knows that he (Kurchenko) is the wallet to pay off Yanukovych," said Viktor Chumak, a senior Ukrainian lawmaker and the former head of the parliament's anti-corruption committee. The purpose of the favorable deals or whether Kurchenko passed proceeds to Yanukovych could not be confirmed.

The details of the gas deals are likely to add to the controversy surrounding Kurchenko. Ukrainian officials have been investigating both him and Yanukovych since earlier this year, though those inquiries have focused on deals involving petroleum products and banking, not the uncovered natural gas deals. Both men fled Ukraine after Yanukovych's overthrow in February and are now living in Russia.

People favored by the Kremlin have profited from Russia's state spending and natural resources. This brand of capitalism extended to Ukraine, which Moscow has never really accepted as a fully independent state, and which Putin has tried to influence through gas supplies.

Kurchenko stands accused by the current Ukrainian government of systematically evading millions of dollars in tax with the collusion of officials in Yanukovych's administration. Vitaly Yarema, general prosecutor of Ukraine, said Kurchenko was under investigation for allegedly failing to pay the state $130 million in tax and allegedly stealing $180 million from bank investors.

Ukrainian officials say Kurchenko was closely connected to Yanukovych, who was toppled over his attempts to align Ukraine with Russia rather than the European Union. The former president is himself accused by the current Ukrainian government of stealing millions of dollars from the state.

The Ukrainian secret service described Kurchenko in October as the "chief financial officer" of what has become known in Ukraine as "the family," a term for associates of Yanukovych. In an interview this month, Arsen Avakov, Ukraine's interior minister, said: "Kurchenko was simply a manager" for the Yanukovych family.

"His biography was clean— simply because he was a young man — and that was why they put him as a front for the family."

On March 24, the General Prosecutor's office of Ukraine announced an investigation into "the establishment of a criminal organization" by Kurchenko, who it described as "close to the 'family' of former President of Ukraine Viktor Yanukovych."

And on May 19, a statement from the Internal Affairs Ministry accused Kurchenko of manipulating the fuel market with the support of "patrons," including former government ministers. Avakov, the interior minister, said Kurchenko was suspected of tax offences relating to oil deals. "This scheme is only possible when the president is covering everything (up), and closing his eyes. It is the tsar's business."

Kurchenko did not respond to requests for comment. He has previously denied the allegations of tax-dodging and said he has no corrupt links to Yanukovych; he has said he is the victim of political persecution. "I am an honest Ukrainian businessman," he said in a statement posted in March on the website of his company, Vetek Group.

Yanukovych did not respond to requests for comment. Firtash, whose business empire, Group DF, expanded rapidly when Yanukovych was in power, declined to comment. 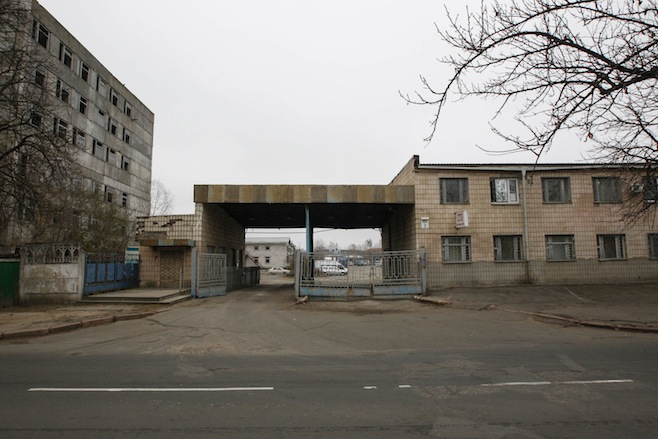 Valentyn Ogirenko / Reuters
External view of a building where the headquarters of Lidergaz is registered in Kiev, on Nov. 13, 2014.

Kurchenko began work at 16 and set up his own company three years later, according to his personal website. He has previously said that he went on to make money from property investments and importing oil products.

In 2012, 20 months after Yanukovych became president of Ukraine, Kurchenko became a public figure when the Ukraine version of Forbes ran an article about him. The magazine alleged Kurchenko secretly controlled various companies where the registered owners and directors had no significant involvement in the businesses.

Kurchenko denied any wrongdoing. He went on to buy Forbes Ukraine, prompting the journalists who had investigated him to quit. Kurchenko also amassed other high-profile assets in his own name: Partly with funding from a state-owned bank, he bought the Metalist Kharkiv football team, an oil refinery in Odessa, and stakes in two banks.

Several people with knowledge of the Ukrainian gas industry, including one of Kurchenko's former executives, said Kurchenko also secretly controlled a little-known company called Lidergaz. That company profited from trading in discounted gas supplies originating from Moscow, according to several Ukrainian officials and gas traders as well as official gas transport data.

The individual listed in corporate registration documents as the owner of Lidergaz couldn't be located. There was no sign of the company at the dilapidated former factory in Kiev listed as Lidergaz's headquarters when a reporter visited. An employee of a law firm that represented Lidergaz said they were unable to contact the company.

Avakov, the Ukrainian Interior Minister, said he was unaware of Lidergaz. But two senior Ukrainian gas officials, one in the current government and one in the previous administration, said Kurchenko controlled Lidergaz. "He installed fake directors at Lidergaz," said the former senior official. "He bought the gas from the Firtash companies and then sold it to the market."

Those claims were supported by others familiar with the company, including a Kiev energy trader. This trader said he knew Kurchenko was behind Lidergaz because he dealt with Kurchenko's aides when doing business with Lidergaz.

According to the former Kurchenko executive, Lidergaz acquired gas from companies run by Firtash, which had originally bought the gas at below-market rates from Russia. Lidergaz resold the gas at a profit inside Ukraine. "It started in 2012 and was finished in July 2013. This was all about a few big deals in which the money was made," said the former executive.

According to the former executive, Kurchenko worked closely with associates of Yanukovych. Kurchenko's staff would receive their week's instructions by text message on Sunday evenings after a weekly meeting between Kurchenko and a close aide to the former president, he said. The former executive said Kurchenko's speciality was organizing opaque commodity deals, executed through multiple transactions that were settled with large amounts of untraceable cash. This person added that he did not witness any specific payments to Yanukovych or anyone else.

As reported last month, Firtash had exclusive access to specially discounted gas supplies from Moscow. He imported it for chemical companies he managed in Ukraine. Official gas transport data show that in 2012 and 2013, Lidergaz bought 3.2 billion cubic meters of gas from Firtash's chemical companies.

A review of corporate filings and court cases concerning gas sales shows that Lidergaz paid $397, before sales tax, for each 1,000 cubic meters of the gas, the standard unit. That was more than $30 per unit below the market price.

According to the former Kurchenko executive and senior Ukrainian officials, Lidergaz resold at market prices all the gas it bought from Firtash's chemical plants, thereby making a profit. Some of the gas was bought by a subsidiary of the state-owned gas company, Naftogaz. The subsidiary said in a press announcement that it paid Lidergaz the market price of $430 per unit, before sales tax.

With those prices, Lidergaz stood to make a $100 million gain.

In light of the findings about the gas deals, Naftogaz said it would examine transactions involving Lidergaz.

The former Kurchenko executive said Lidergaz made even more money because Kurchenko exploited the tax system. He charged sales tax on the gas he sold, but failed to pass the tax on to the government, the former executive said. The alleged theft of tax revenues is a central part of Ukrainian investigations into Kurchenko. "He never paid customs duties. He never paid VAT (sales tax)," said Ihor Bilous, the head of the Ukrainian tax service.

Kurchenko has denied the tax allegations. 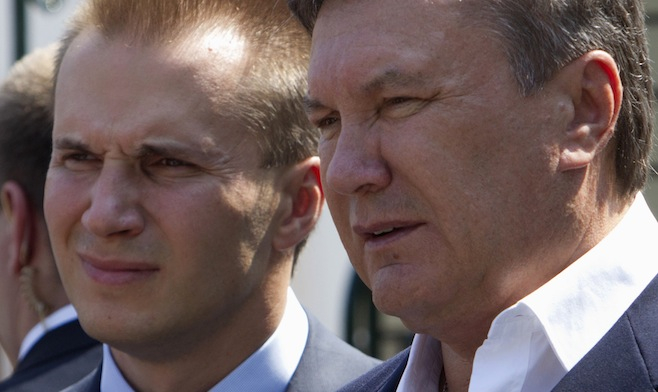 The gas data analyzed expose a curiosity: The chemical companies run by Firtash are large consumers of gas, yet they sold gas to Lidergaz for less than they had bought it themselves. Firtash declined to answer questions on the issue and Kurchenko did not respond to requests for comment.

Interior Minister Avakov said he believed thatYanukovych's elder son was a powerful force behind Kurchenko. "Yanukovych's son Oleksandr made all the decisions. Kurchenko and Oleksandr Yanukovych operated as one group," said Avakov.

Viktor Yanukovych did not respond to requests for comment. His elder son Oleksandr, who is also believed to be in Russia, said by email: "I have repeatedly stated that I barely know Serhiy Kurchenko." He added that he and his managers did not have any personal or business relations with Kurchenko.

In an interview with Forbes Ukraine magazine last year, Kurchenko denied knowing Oleksandr Yanukovych, and said his businesses did not need connections in the Yanukovych government.

In March, Firtash was arrested in Austria at the request of U.S. authorities investigating him for alleged bribery in business deals in India. Currently free on bail of 125 million euros ($155 million), Firtash strongly denies any wrongdoing. He declined to comment on questions about his gas deals.

In Russia, powerful friends helped him make a fortune. In the United States, officials want him extradited and put behind bars. In Austria, where...
news

Ukrainian industrialist Dmitry Firtash, arrested in Austria last week at the request of the U.S. pending his possible extradition for suspected corruption...
news


Ukrainian billionaire Dmytro Firtash, charged with bribery in the U.S. and currently awaiting an extradition hearing in Vienna, said that he is...
final protest