Those relying on Russia's state-run media right now are probably under the impression that all of America is up in flames and on the brink of imploding because the U.S. government is tyrannical and has been oppressing the underdogs for too long — and Ferguson is proof.

In the Russian press, what started out as protests following Monday's decision not to indict the white police officer who fatally shot an unarmed black teenager in a small town in Missouri back in August has morphed into an existential crisis worthy of front-page stories and hour-long segments on state-run television.

Why should these protests warrant so much attention not only from Russia's state-run media, but also from the Foreign Ministry? Why has the late 18-year-old Michael Brown become such a cause celebre to Russians ranging from minor political figures to regular police officers, all of whom have portrayed the incident and current rioting as proof of oppression and human rights violations by U.S. authorities?

The attention given to this case is especially puzzling when one thinks back to February 2012, when the fatal shooting of 17-year-old Trayvon Martin triggered similar protests in the U.S. Why was Martin's face not splashed across the covers of Russian newspapers next to proclamations of the U.S. racial divide? Where was Russia's bleeding heart then?

Sometimes the most obvious answer is the most likely one: Martin, a black, unarmed high school student, was shot long before the Ukraine crisis, long before Russian media needed a distraction for its domestic audience.

And the U.S. protests are the perfect distraction: The image of the U.S. descending into chaos as the oppressed rise up against the oppressors comes straight out of the Soviet propaganda playbook.

So does the racial aspect of the Ferguson shooting. American racism provided a go-to argument of American hypocrisy for years under the Soviet Union, with phrases like "Well, you lynch negroes" hurled back at the U.S. in response to any allegations of human rights violations in the Soviet Union.

Racial discrimination in the West dominated Soviet propaganda and featured heavily in all forms of media, even comics and science fiction novels. Portraying the West as a racist hellhole masquerading as a just superpower not only took the U.S. down a notch, it also puffed the Soviet Union up in the eyes of its domestic audience, making it look more like the utopia it pretended to be.

The same tactic is being used by Russia's state-run media now. The events in Ferguson and related protests have managed to edge out the Ukraine crisis, with montages of rioting in the U.S. relegating the Ukraine crisis to the sidelines.

On Thursday, Ferguson was the top news story on the English-language website of Sputnik, the freshly unveiled state-run news agency with tentacles extending to numerous continents in dozens of languages.

Images of Michael Brown and burning police cars were accompanied by headlines like "Seething America: Waves of Discontent Flood Almost 40 States" (Vesti) and "Americans Stocking Up on Weapons After Ferguson" (NTV). 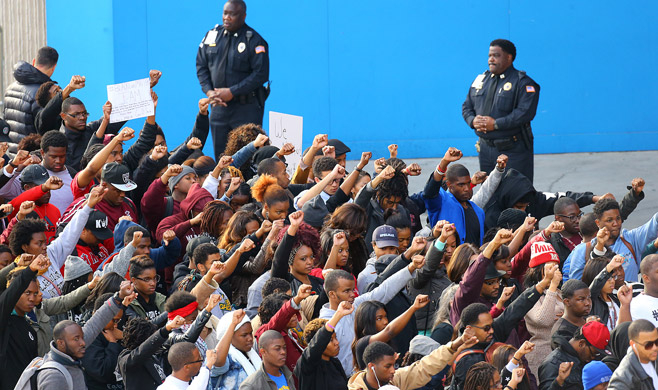 Law enforcement officers watching as college students in Atlanta protest the decision not to indict the officer.

But the hysteria over Ferguson wasn't limited to the media. In fact, the media was simply echoing the message sent by representatives of the Foreign Ministry.

On Tuesday, Alexander Lukashevich, the official spokesman for the Foreign Ministry, denounced the U.S. authorities' "heavy-handed response" to events in a three-minute video posted to YouTube.

"People who were just trying to express their stance as civilians were met with a harsh rebuff by the police … such a large-scale outburst of the public's resentment and the disproportionate reaction by law enforcement authorities once again shows that we are talking not about an isolated incident, but systemic flaws in American democracy, which hasn't been able to overcome a deep racial divide, discrimination, and inequality," Lukashevich said, adding that African-Americans regularly face attacks and harassment in the U.S.

In closing, Lukashevich "reminds" the U.S. of its "need to meet the obligations it has taken on to uphold democratic principles," adding that "Moscow is following the tense situation in Ferguson with concern."

Even ordinary Russian police officers have been used to shame the U.S. authorities for the events in Missouri, with the Moskovsky Komsomolets newspaper offering commentary from Mikhail Pashkin, head of the Moscow Police Union.

"It would have been sufficient to simply wound him [Brown] in the leg," Pashkin said of the shooting, according to the report. "But they have a different way of treating blacks in America."

That such a wide array of people should jump on the Ferguson bandwagon with such strong statements is an indication that the distraction is working — and it is greatly needed in light of Russia's own economic problems and increasing isolation on the world stage.

There is no doubt that the U.S. has plenty of flaws to fix, and the protests over Ferguson have most certainly thrust this into the spotlight.

But comparing the Ferguson protests to "Obama's Maidan" — an analogy that has dominated much of the Russian media this week — says more about those making the comparison than anything else.

And it reeks of desperation. The reliable Soviet trick of shouting "Look, a racist!" any time a problem at home threatens to rear its ugly head may be effective for now, but the fact that Moscow has resorted to this only reveals its own insecurities.

Coming from a place where spontaneous protests are not just broken up but banned by law, this preaching about how to handle public discontentment just seems like grasping at straws.

As U.S. authorities deployed the National Guard to deal with riots in Ferguson, Russia's state-run media and Foreign Ministry claimed that the protests...
apology wanted

He instead blamed Western sanctions imposed on Russia.