A few hundred people packed a Moscow movie house to watch a film about a country where homophobia is the norm and a national tabloid can call homosexuals "perverts."

This was not a film about modern Russia, but about 1980s Britain.

The Russian premiere of "Pride" — the acclaimed true-life story of how gay and lesbian activists came together in the mid-1980s, in Thatcherite Britain, to raise money in support of a striking mining community in South Wales — took place last Sunday in Formula Kino Gorizont as part of the New British Film Festival.

A feel-good movie, packed with British stars like Bill Nighy, Imelda Staunton and Dominic West, "Pride" had the audience laughing, tapping their feet, and perhaps thinking about the starkly different views on gay rights now in Britain and in Russia.

"Pride" looks at the hostility faced by members of the LGBT community in 1980s Britain from three decades away and with a different mindset. In Russia, intolerance remains a reality for gays and lesbians.

Kommersant critic Anna Narinskaya noted before the premiere: "You need to watch it now and in this country. In our country, where on a prime-time program you are informed about the need for the burning of gay hearts, … in circumstances that are very similar to those shown in the film, for state homophobia in England in the mid-1980s was only a little better than here today."

Narinskaya was referring to Dmitry Kiselyov, who is now the head of state news agency Rossiya Segodnya and once said that the hearts of homosexuals should be burned if they died in car accidents.

"Showing such a film in Russia is very important because conditions are being created in the country right now that provoke intolerance," said Igor Kotchetkov, chairman of the Russian LGBT Network.

"Quite a few issues are addressed in this film, but you wouldn't know it, which is what I love about it. You're laughing and laughing, and then you suddenly think, 'I can't believe people really thought like that,'" Staunton, who plays a member of a village committee in the movie, said in a statement on the film's web site.

In the film, the LGBT activists are initially spurned by the National Union of Miners, while a leading tabloid newspaper scorned their fund-raising attempts by running the headline “Perverts Support the Pits.” The group eventually overcame these setbacks to become one of the largest fundraisers for pitmen in the Welsh village of Onllwyn, in an unusual and heart-warming union between two otherwise disparate groups. 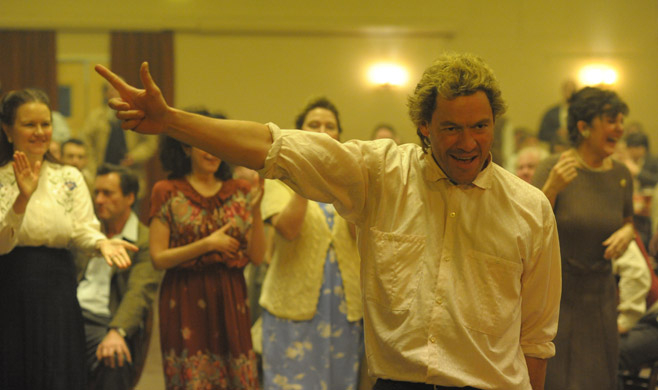 Dominic West disco dancing up a storm in the miners' village in "Pride."

The LGSM later use the headline "Pits and Perverts" as the title of a fund-raising concert that raised thousands of pounds sterling.

The film is being shown with an +18 rating — not to stop it falling in the remit of the country's anti-gay law, which bans the promotion of homosexuality to minors, but because all of the films at the festival were given an automatic +18 rating by the organizers, British Council project manager Lidia Khesed said. The film has a +15 rating in Britain.

Khesed added that organizers did not have any pressing concerns ahead of the showing of the film, which screens again in Moscow this coming Sunday.

"We believe that cultural links are one of the best ways to explore where we agree and differ, and make a powerful and lasting contribution to a more peaceful, tolerant and prosperous world," Khesed said.

Unlike the LGBT film festival QueerFest, which ran in September in St. Petersburg — where moviegoers were pelted with green paint by a group of anti-gay activists — last Sunday's showing of "Pride" went off without any trouble.

"I liked the idea of this film because it is one close to my heart. I have a friend who is gay, and I have heard lots of stories about [many Russians'] lack of understanding," Lena, who refused to give her last name, said after the showing of "Pride."

Kotchetkov did not rule out a "Pride 2" taking place here in Russia, should miners in the country's coal-rich Kuznetsk Basin ever decide to go on strike.

"I think it is entirely possible to imagine [gays and lesbians offering their support] if the miners in the Kuzbas were fighting for justice," Kotchetkov said. "It is very important that groups fighting for fairness and human dignity work together to help one another."


"Pride" plays Sunday at 5 p.m. at Formula Kino Gorizont. 21/10 Komsomolsky Prospekt. Metro Frunzenskaya. +7 (800) 250-8025. In English; Russian subtitles. A full schedule of films playing at the British Film Festival can be found on the official website ukfilms.ru.