Pro-Russian separatists in Ukraine named a leader of their breakaway republic on Monday after a weekend election which was denounced by Kiev and the West and further deepened a standoff with Russia over the future of the former Soviet state.

Organizers of the vote said that Alexander Zakharchenko, a 38-year-old former mining electrician, had easily won election as head of the "Donetsk People's Republic," an entity proclaimed by armed rebels in the days after they seized key buildings in cities of Ukraine's Russian-speaking east last April.

The rogue vote, which Kiev says Russia encouraged, could create a new "frozen conflict" in post-Soviet Europe and further threaten the territorial unity of Ukraine, which lost control of its Crimean peninsula in March when it was annexed by Russia.

Kiev and the West will now be looking to see if President Vladimir Putin will formally recognize the validity of the vote, despite their entreaties to him not to do so.

A Russian deputy foreign minister, in an initial reaction, made no mention of formal recognition but said the newly elected leadership in eastern Ukraine had been given a mandate to negotiate with Kiev.

Up to now, Kiev's leaders have refused to hold direct talks with the separatists, whom they refer to as "terrorists" and "bandits."

If Moscow were to recognize the vote, it would narrow options too for Ukrainian President Petro Poroshenko.

He has ruled out trying to take back the region by force after big battlefield losses in August. But after a parliamentary election on Oct. 26, he is now supported by a pro-Western power structure, determined to stop the break-up of Ukraine, and he could come under pressure to take a firmer line. 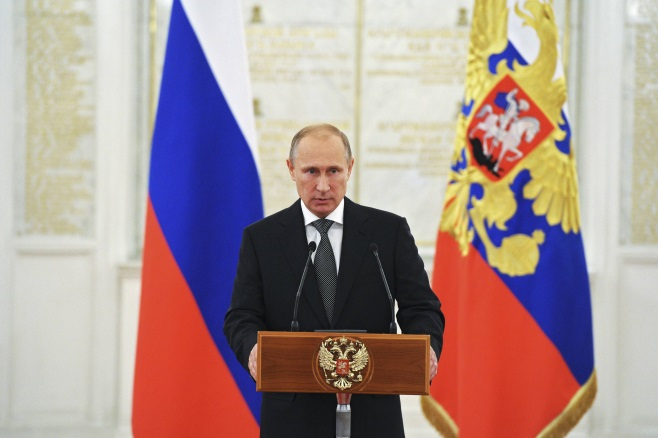 Russian President Vladimir Putin delivers a speech at the Kremlin in Moscow.

Putin's first word on the weekend election could come on Tuesday when he is due to appear at a Red Square ceremony in Moscow marking National Unity day.

"The central election commission deems Alexander Zakharchenko to be the elected head of the Donetsk People's Republic," an election official, Roman Lyagin, told journalists in Donetsk, the separatists' stronghold. Numbers of ballots cast for him appeared to show he had won 79 percent of the vote.

The vote was the latest twist in a geopolitical crisis that began with the popular overthrow of Ukraine's Moscow-backed leader, Viktor Yanukovych last February.

Russia denounced Yanukovych's ousting as a coup by a "fascist junta" and the following month annexed Crimea and subsequently backed the separatist rebellions that sprang up in the east.

Kiev says that only direct intervention by Russian troops stopped Ukrainian government forces routing the separatists, though Russia, despite what the West says is incontrovertible proof, denies sending troops across the border.

More than 4,000 people have been killed in the conflict, which has led to U.S. and European Union sanctions against Russia.

Kiev and Western governments, including the United States, say the election violated a bedrock agreement reached on Sept. 5 in the Belarussian capital, Minsk, which was also been signed by Russia.

Kiev says this provided for elections to be held under Ukrainian law which would appoint purely local officials. The rebels' vote to elect leaders and institutions in a breakaway territory violated the agreement, it says.

Speaking on Sunday, Poroshenko reiterated Kiev's view and denounced the ballot as a "farce (conducted) under the barrels of tanks and machine guns."

Current developments in east Ukraine ruled out any premature lifting of EU economic sanctions against Russia and if the situation worsened, further sanctions may be necessary, spokesman Steffen Seibert said.

Italy does not recognize the election, Foreign Minister Paolo Gentiloni said, adding: "There is no alternative to a political solution to the crisis."

A Sept. 5 cease-fire has brought an end to full-scale clashes between government forces and the Russian-backed separatists, though sporadic shelling particularly in the airport area of Donetsk, continues to exert pressure on the truce.

Artillery fire was heard in the direction of the airport hours after the polling stations closed on Sunday night, but Monday was generally quiet in the city center.

Zakharchenko, the current rebel prime minister whose campaign advertisements are plastered across Donetsk, was always certain to win the vote.

In electioneering, he has compared the Donbass region's coal deposits to the oil reserves in the United Arab Emirates and has promised pensioners a stipend that will allow them to go on safari in Australia.

His election though will mean little by way of change for the region, which is increasingly dependent on Russia for support financially and politically as it faces a humanitarian crisis which will only worsen in winter.

"He (Zakharchenko) doesn't eat, he doesn't sleep. He works only for us 150 percent of the time," said Lyudmila Kovalenko, who works at a school and is an ardent supporter. She said the rebel leadership had fixed the windows of the school after it was hit by a mortar.

But Natasha, 28, a nurse, said: "I didn't vote in the elections. They mean nothing to me, they only mean more people with guns and more chaos. Since they've taken over, our Donbass has produced only idiots."

"I don't want to give you my last name because this is like the 1930s, like Stalin's purges, people are afraid to speak their mind," she said.

German Chancellor Angela Merkel told President Vladimir Putin on the phone that Sunday's planned elections in eastern Ukraine were illegitimate and would...
opinion

After Elections, What's Next for Ukraine?

Sunday's elections in Ukraine mean that the country has a fresh impetus to start making essential reforms, and it must do this, writes columnist Robert...
news