Nearly half of all Russians believe that a return to Soviet-era repression is possible within their lifetime, a poll by the state-run Public Opinion Foundation revealed Wednesday.

The poll, titled "Mass Repression in the Soviet Union," examined the public's perceptions and interpretations of Soviet-era repression. Millions were persecuted for their political beliefs during the Soviet period, with the darkest period beginning in the late 1930s. The results of the survey were published just ahead of the Day of Remembrance of the Victims of Political Repression, celebrated annually on Oct. 30.

Of the poll's respondents, 48 percent anticipated the possibility of a return to political repression within their lives, with 14 percent describing the likelihood of such a phenomenon as high, while 34 percent said that though possible, repression is unlikely. A quarter of respondents said they did not expect to see political repressions in their lifetime, and another 22 percent expressed difficulty answering the question. 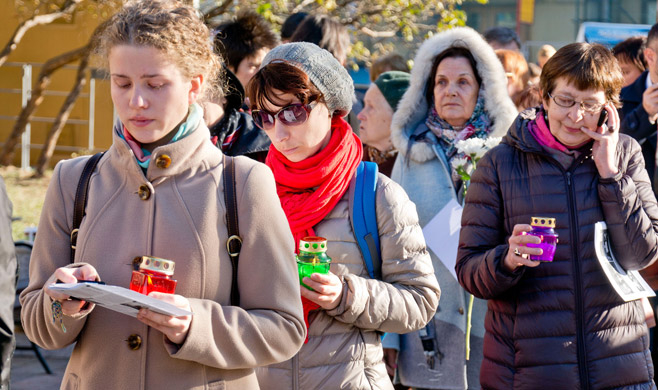 People lining up on Lubyanskaya Ploshchad on Wednesday to read out the names of those shot in Moscow as part of Stalin’s Great Terror, in an annual ceremony arranged by rights group Memorial.

In addition to revealing popular thoughts on the possibility of future repression, the results of the poll also evidenced a shift in the public's understanding of Soviet-era repression. The number of those who view Soviet-era political repression as having been justifiable jumped from 12 percent in October 2012 to 17 percent at present.

The poll further revealed that fewer people blame Soviet dictator Josef Stalin exclusively for the height of political repression in the 1930s, with 40 percent saying he holds all responsibility, compared with 43 percent in 2012. Correspondingly, there was an increase in the number of those who pin the blame on members of Stalin's inner circle and members of the NKVD, the shadowy predecessor to the KGB.

In Moscow, Remembrance Day is commemorated at Lubyanka Square. Since 2007, the 70th anniversary of the start of Stalin's Great Terror, human rights organization Memorial has spearheaded an event each year called "The Return of Names." As part of the event, activists take turns reading out the full list of names of the 30,000 people executed in Moscow between 1937 and 1938.

President Vladimir Putin's rating has fallen for the first time this year, with a substantial drop in the number of those who say they are ready to re-elect...
deep freeze