While the Islamic State's notorious red-bearded leader Omar "the Chechen" al-Shishani made headlines last week for a threat against Russia that he may or may not have made, a family in southern Russia was being asked to identify the body of their 29-year-old son who had reportedly returned from Syria a professional bomb-maker.

Before he could make use of those skills on Russian territory, Alidibir Asludinov was killed last week in a shootout with security forces in the village of Kirovaul in Russia's southern Muslim-populated republic of Dagestan, a hotbed of violence between the local Islamic insurgency and security forces.

The return of Asludinov and other Russian Muslim fighters from the battlefields in Syria presents new security challenges to the Russian government, which has managed to keep in check its own Islamist rebels who rocked the country's underbelly for nearly two decades after the collapse of the Soviet Union.

Security analysts largely agree that fighters returning from Syria — all closely watched and hunted by heavy-handed security services on the ground — would not be able to quickly bring war home. But the mere existence of the Islamic State, whose creation involved some of Russia's Muslims, could be reinvigorating for supporters of the Caucasus Emirate, an Islamist state sought by radical North Caucasus rebels.

Shishani's switch to the Islamic State represents a wider trend in the conflict, as militant fighters from Russia have used the chaos on the ground in Syria to achieve something they were unable to back home.

"The militants' departure to Syria was an attempt to find themselves outside of the Caucasus Emirate, which they weren't able to break into," said Mairbek Vachagayev, a Chechen former official for the Chechen republic of Ichkeria — as the republic was known during its brief de facto independence between the two Chechen wars — who now works for the Washington-based Jamestown Foundation think tank researching terrorism.

And with so much hype surrounding the Islamic State, including frequent media reports of threats against Russia, it is increasingly difficult to discern the real threats from the bravado and PR.

The most high-profile threats from the Islamic State include a fatwa that the online news site Pressa Today said had been issued by Shishani against Chechen leader Ramzan Kadyrov and other Chechen officials. Last month, Shishani reportedly used the popular free messaging app WhatsApp to offer his followers a whopping $5 million for Kadyrov's head, but according to Pressa Today and various jihadi-friendly social media accounts, he didn't stop there: The list of Kadyrov and 11 other high-ranking Chechen officials came to a grand total of $24.5 million.

Prior to that, Russian-speaking members of the Islamic State made their ire for Russia very clear in a video message posted on YouTube in which they personally threatened President Vladimir Putin and vowed to "liberate" the North Caucasus.

Vachagayev was skeptical about these threats.

"If they believed they could return home [to launch an attack], why did they leave the Caucasus? Why bother to travel 1,000 kilometers from your homeland to wave your fists around?" he said.

"I don't think these threats should be considered serious threats to Russia. In reality, Russia could very seriously close off all channels through which these former militants would return," Vachagayev told The Moscow Times.

The Chechen analyst was equally skeptical of news reports that Shishani had threatened Russia, saying the Bloomberg report making this claim was questionable.

"I'm fairly certain that there was no threat from Omar Shishani. First of all, he doesn't speak to his father, whom he considers an infidel, since his father is a Christian, while he kills Shia Muslims for not being the 'right' kind of Muslim," Vachagayev said, noting that fears of an impending attack on Russia were mostly exaggerated.

Shishani's father, who was cited by Bloomberg as saying his son had called to inform him of a looming threat against Russia, has been identified as a Christian in various media reports, including by the BBC and Wall Street Journal. 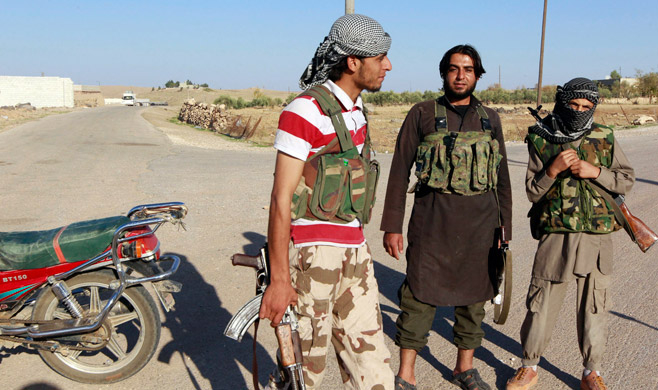 Islamic State fighters standing on a street in the countryside of the Syrian Kurdish town of Kobani last week.

Whether or not the Islamic State's skilled PR tactics and loud proclamations have influenced the Caucasus Emirate is open to debate, but many Chechen fighters in Syria have openly said that Russia is not a priority for them.

Abdul Karim Krymsky, the Crimean Tatar deputy commander of Jaish al-Muhajireen wal-Ansar, a battalion in Syria comprised mainly of men from the North Caucasus, released a video message in May calling on fellow Tatars to wage war in Ukraine or Russia — but only if they could not make it to Syria.

If Russia was never the main priority in the eyes of fighters in Syria, should threats against it by Islamic State be taken seriously?

While there is always a risk of Chechens returning home to carry out attacks, they would only be isolated incidents, and even then they could potentially be stopped, said Alexander Shumilin, head of the Center for the Analysis of Middle East Conflicts at the Institute for U.S. and Canadian Studies in Moscow.

Asludinov, the Dagestani alleged bomb apprentice killed last week, was not affiliated with the Islamic State. He was a member of Dagestan's underground insurgency even before he left for Syria, according to a statement issued by Russia's Anti-Terrorism Committee.

In the aftermath of the recent Grozny suicide bombing, Kadyrov said the attacker had acted alone, without any backing from extremist groups.

"They won't return to carry out attacks," Shumilin said. "They will return primarily to affirm the existence of the Caliphate. And that's something else altogether, it's on a larger scale. [They'll do] ideological work, disrupting the work of authorities in the North Caucasus … expanding the underground insurgency that has already been operating there for so long."

Shumilin dismissed the notion — heard with increasing frequency as the Islamic State takes more and more of the spotlight — that the Caucasus Emirate, which once sent a steady stream of suicide bombers around the region and as far as Moscow, was now irrelevant.

The two groups proclaim an ultimate goal of establishing a Caliphate under Sharia law, but in a sign of friction, the press service of the Caucasus Emirate on Monday issued a statement that seemed aimed at subtly undermining fighters from the North Caucasus who are active in Syria, as well as those who support them financially.

"Why don't we notice our own problems but instead nose our way into those that are happening far away?" read the statement on the group's website, which is banned in Russia but accessible using a proxy server.

"Why not help those who are fighting for the word of Allah Almighty to be higher than everything else on our land?!"

Islamic State Commander Phones Dad to Warn 'Russia Is Next'

The Islamic State's infamous red-bearded commander known as Omar the Chechen has phoned his father to vow his impending "revenge against Russia," Bloomberg...
new title

The price cap on Russian oil agreed by the EU, G7 and Australia is set to come into force on Monday. It aims to restrict Russia's revenue while making...