The Hare Krishna movement has been trying to build a temple in Russia since 1990. They still don't have one.

It's not for lack of funds. Ever since worshipping Krishna was legalized in the Soviet Union 26 years ago, the group has struggled to capitalize on Russia's "religious renaissance."

Despite a devout core of local followers, Russia has been slow to accept the Hare Krishnas, who routinely feature in reports about religious-freedom violations and face allegations of being a "totalitarian sect."

The group is singled out because of its distinctly foreign customs, which stir the distrust of outsiders inherent to many Russians, said religious studies expert Sergei Filatov.

"They are just too bright and noticeable," said Filatov, who works at the Institute of Oriental Studies at the Russian Academy of Sciences.

Krishna worshippers say that the situation has improved since Soviet times, and is continuing to get better. But the latest construction permit for the temple was revoked just last year and has yet to be renewed. 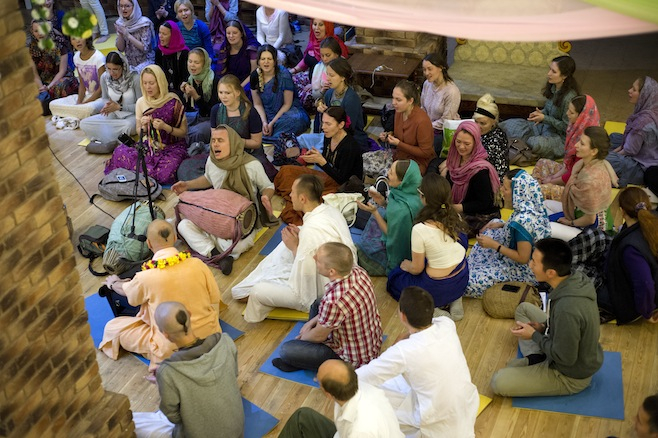 The Hare Krishna movement in Moscow sits nestled in an underground hall leased from the All-Russia Association of the Blind. The crowd that gathers to chant the “Hare Krishna” mantra to the hypnotic beat of drums swells to several dozen on a Friday night.

Rock, Krishna and Other Dangers

Though Krishna was born 5,242 years ago, according to the holy texts, the International Society for Krishna Consciousness was only founded in 1966 in New York.

The Hare Krishna movement began to catch on beyond the Iron Curtain in 1971, when founder Bhaktivedanta Swami Prabhupada travelled to Moscow despite the Soviet Union's militant devotion to atheism.

While Soviet officials were less than keen on religious movements, in this case they simply did not understand what was going on: Bhaktivedanta Swami was believed to be a Hinduism studies expert when he arrived, evading suspicion, said Sanjeet Jha, an Indian-born Krishna follower who heads the Association of Indians in Russia.

With Bhaktivedanta Swami's visit came the first Soviet Krishna followers and the "samizdat" [undercover] distribution of his faith's books, including the main scripture, the "Bhagavad Gita."

But his visit also brought repression: For the next decade and a half, Soviet Krishnas were persecuted, placed in mental asylums and jailed on charges such as "physically-harmful religious customs," a reference to the vegetarian lifestyle adopted by adherents.

Deputy head of the KGB Semyon Tsvigun said in 1981 that "there are three great dangers to the Soviet lifestyle: Western culture, rock 'n' roll and Hare Krishna." 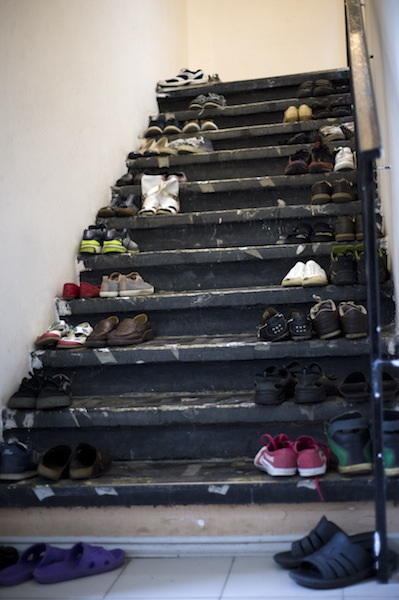 Though Krishna was born 5,242 years ago, according to the holy texts, the International Society for Krishna Consciousness was only founded in 1966 in New York.

"I had my run-ins with the KGB, police, even the military," said Karen Khachaturyan, 48, who joined the movement in 1986.

The stocky Khachaturyan, draped in emerald and white, with his shaved pate, spiritual name —Prabhupada Das — and the benevolent smile of a man who found the meaning of life, looks every bit a Hindustani native.

But he is really a native of Armenia who was secretly baptized shortly before finding his truth in the teaching of Krishna.

Khachaturyan spent years spreading the word of Krishna. He began in Armenia, but has spent the past eight years in Moscow. He used to subside on the portion of income he got from selling Krishna books — they do not come for free — but took up design a decade ago to pay the bills.

He said he had frequently dealt with distrust, even eliciting accusations of working for the CIA — but he regrets nothing.

"Bhaktivedanta Swami, his energy, his personality have really influenced me," Khachaturyan said in a characteristic Armenian drawl. "He was a man who really walked the path to sainthood."

Russia officially allowed the Hare Krishna movement within its borders only 26 years ago, and the group is still striving for acceptance.

The Long Road to the Temple

The Hare Krishna movement in Moscow sits nestled in an underground hall leased from the All-Russia Association of the Blind.

The crowd that gathers to chant the "Hare Krishna" mantra to the hypnotic beat of drums swells to several dozen on a Friday night. Young faces dominate. Many are women who have wrapped saris over fashionable secular clothes.

Russia's Krishna population is estimated to be as high as as 250,000, said Jha of the Association of Indians of Russia.

However, Filatov of the Institute of Oriental Studies capped Krishna's Russian flock at 15,000.

Jha said the numbers are steady and rising, though Orthodox Christian priest Andrei Kurayev told The Moscow Times that after a spike in numbers, many Krishna followers are now deserting for Christianity.

One example is Dmitry Enteo. After having formerly harbored interests in New Age and Oriental spiritual teachings, the self-proclaimed Christian "missionary" with a track record of public violence now runs the anti-Hinduism and anti-Buddhism website Proprosvetlenie.ru.

The Krishna movement preaches in the streets, caters to the faithful and runs the local branch of its Food for Life program, Jha said.

Food for Life launched in the Soviet Union in 1988 and continues operations in Russia to this day despite criticism that Krishna worship is inherent in the activity of helping the hungry, as the food provided is considered by believers to be the deity's leftovers.

The Krishnas provided food relief to the victims of a disastrous flood in the southern city of Krymsk in 2012 and lost a charity volunteer to rebel fire during the first Chechen war in the 1990s.

But above all, the movement is striving to build a temple. The group has transferred venues on four occasions at the insistence of the Moscow City Hall, which has repeatedly issued and then withdrawn construction permits.

Photographs at the site of the Moscow Vedic Cultural Center show a massive six-story Hindu-style building in a typical, pastoral Russian landscape. But the pictures are only of a 3D rendering of the temple.

The City Hall had not yet responded to a request for comment faxed last week by the time of publication. 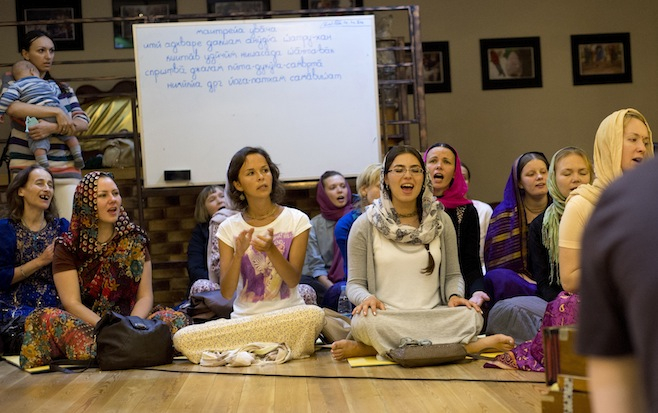 Young faces dominates including many women who have wrapped saris over fashionable secular clothes.

The Krishnas may have gained legality in Russia, but their existence is far from cloudless.

The group regularly runs into trouble with authorities and locals on the ground. In 2011, prosecutors in the Siberian city of Tomsk sued to have the annotated text of the "Bhagavad Gita" banned for extremism, though the lawsuit was eventually thrown out.

In 2012, a motley crowd of Cossacks, Christian activists and Muslims protested the planned construction of a Krishna temple outside Moscow, comparing Krishna followers to the Napoleon invasion.

The Hare Krishnas have certain hallmarks of a "totalitarian sect," said Orthodox priest Kurayev, who is generally considered to be a spokesman for the church's moderate wing.

The loosely defined term "totalitarian sect" has been used in Russia since the 1990s, when the country was flooded with gurus and "spiritual teachers" who brainwashed followers in order to abuse and rob them.

The Krishna movement certainly attracts a lot of excitable, easily influenced young people and has a rigid subordination scheme — everyone must have a guru — but has not been accused of swindling people of money and apartments, said religious expert Filatov.

"As for totalitarianism accusations, well, would you say the Orthodox church is all that democratic?" Filatov quipped.

The Krishnas get their share of abuse, but they are not the main focus of Russia's increasingly powerful religious conservatives, said Olga Sibireva, who tracks abuse of religious freedoms at the anti-xenophobia watchdog Sova.

When queried whether there is anything specific about the Russian branch of the Hare Krishna, Jha puzzled for a second before saying that it was the problem they were facing with their temple.

But he spent the rest of the interview insisting the movement is not being discriminated against.

"What we need is better dialogue. We just lack understanding," he said.

"It was definitely worse back in the day," Khachaturyan agreed with a smile.

"People see we just sing the holy names in joy, distribute books and don't do anything negative," he said, right before inviting the reporter to come back on his free time to chant "some nice quiet mantras."

"In order to preserve the lives of Ukrainian defenders, a decision was made to withdraw," said the Ukrainian army.
deadly strike