The Kremlin is using all of its resources to win the information war against the U.S. over Ukraine.

The latest tool was a May 5 award ceremony in the Kremlin in honor of 300 Russian journalists, most of whom work for state-controlled media, for their "objective coverage of events in Crimea." The award, given for "outstanding service to the Fatherland," is one of the highest honors bestowed by the government on citizens for "strengthening the Russian state." Well-known recipients of this award include sculptor Zurab Tsereteli, musician Yury Bashmet and former Prime Minister Viktor Chernomyrdin.

In the West, journalists are given awards for fighting the government. In Russia, they are awarded for serving it.

Among the 300 journalists who reportedly received the state award was Arkady Mamontov, the anchor of a popular talk show on Rossia 1 who once said on his program that if Russia did not rid itself of the "homosexual plague," the country awaits the same fate as Sodom and Gomorrah. Journalists from state-­controlled Channel One, Rossia, RT television and NTV also received the "objectivity awards," as did Kremlin-friendly Komsomolskaya Pravda newspaper and the tabloid LifeNews.

What is strange about the award is that it was top secret. As is the custom in Russia, President Vladimir Putin had to sign a decree, No. 269, to give the journalists this high government award, but the decree never appeared on the presidential website. Between decrees 268 and 270 was a gaping hole. It was almost as if Putin had given awards to top-secret ­intelligence agents, not journalists who are household names to millions of Russians.

We only know about the award ceremony because Vedomosti broke the story after receiving a leak from an award recipient. Presidential spokesman Dmitry Peskov and several laureates confirmed the leak but were reluctant to discuss the details with the media.

At the same time, however, it makes sense that the Kremlin wanted to keep the awards secret. After all, it is fighting a fierce information war with the West, and these journalists from state-controlled media outlets are on the front line of this battle to present Russia's version of the Ukrainian crisis in the best possible manner. Like in any war, the government needs to keep the "fighting spirit" high.

One way to do this is to award their "propaganda soldiers" for their previous achievements — for ­example, keeping mum on the deployment of Russian troops in Crimea and spreading Putin's line that soldiers only appeared on the peninsula "to provide safety during the actual referendum on March 16." Another example included NTV's report that "up to 5,000 private U.S. mercenaries" are fighting in Ukraine, which is completely groundless. So much for objectivity.

The objectivity awards were also an advance to ensure that the journalists keep up their good work in the future. After all, the Ukrainian crisis and accompanying information war will likely be a long and protracted one, and the Kremlin needs hundreds of enthusiastic, inspired journalists to toe the government line as its propaganda battle pushes forward.

Take, for example, last Friday's evening news on Rossia television. The anchor — a laureate of the presidential objectivity award — presented a segment showing a victim of anti-Russian violence in eastern Ukraine. "Every day peaceful residents are dying," the correspondent said as the video showed a dead body lying in a field.

The only problem was that the video was shot in the North Caucasus 1 ½ years ago. Dmitry Kiselyov, also a laureate of the objectivity award and anchor of a weekly news program on Rossia, said it was an "accidental error." But given the long narrative that accompanied the video, it seems as if it were a deliberate attempt to manufacture violence in eastern Ukraine and blame it on the Kiev authorities. 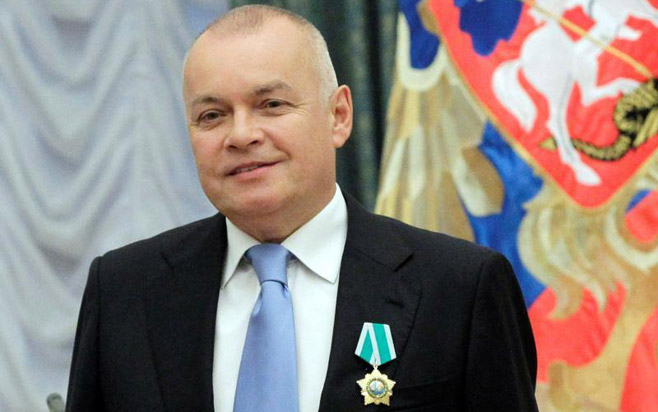 And the stakes are high for the Kremlin. According to a Levada Center poll published May 12, 94 percent of Russians rely on state television as their primary source of information about Ukraine.

The main goal of the Kremlin's award ceremony was clear: to thank its journalists for their loyalty. As it turns out, loyalty to the government — not their readers and viewers — is exactly how the Kremlin defines "outstanding service to the Fatherland."

In so doing, the Kremlin has flipped the traditional role of journalism completely on its head. Journalists working for the main nationwide television channels and high-circulation newspapers, of course, should be independent of the government. How can they perform their traditional Fourth Estate role as a check and balance against the government when they are under the control of the government, eat from its hand and accept awards from it? Instead of exposing government abuses, state-controlled journalists are often compelled to whitewash, cover up or simply ignore them.

In the West, journalists do not receive professional awards from the government, which would be a clear conflict of interest. The awards they do receive are from their own professional organizations. And these awards are not for "objectivity," but, as a rule, for outstanding achievements in investigative reporting and exposing government crimes and abuses.

Thus, while the West gives journalistic awards for fighting the government, the Kremlin gives awards to journalists for serving it. 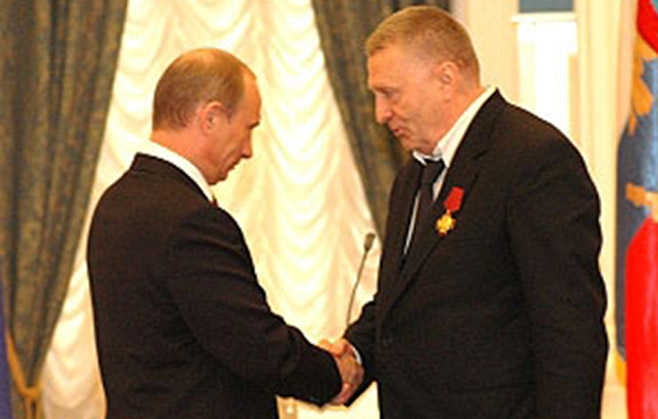 Vladimir Zhirinovsky, leader of the Liberal Democratic Party, receiving the "Service to the Fatherland Award" from Putin.

To be sure, the Western media has its share of problems with the lack of objectivity when it covers Russia and Ukraine. But the origin and nature of the Western media biases are different. If the Western mass media often misrepresent events in Russia and Ukraine, it is usually because they do not understand the history of these countries, or they are limited by their own parochial biases that often see conflicts, such as the current one in Ukraine, in black-and-white terms: The West and its allies in Kiev are the "good guys," while Russia — and the Donbass separatists — are the "bad guys."

But what makes the Western media's biases different is that they do not take orders from their governments. In Russia, however, the lack of objectivity in the media is a much more serious problem. The main function of Russia's state-controlled mass media is propagandistic at its core: to defend and justify the actions of the government. This is the fundamental difference between the West's ­often-tendentious coverage of Russia and Russia's outright propaganda.

By awarding state-controlled journalists for their "objectivity," it was almost as if the Kremlin went out of its way to mock itself and the award recipients. Even the Soviet Union, which was notorious for honoring journalists and other professions with numerous medals of honor, never awarded their propagandists for "objectivity."

You know things are truly bad in Russia when the Soviet Union appears more honest.

Ukraine’s successful counteroffensive in the Kharkiv and Kherson regions means that a large chunk of the country’s Russian-speaking southeast...
opinion Artyom Shraibman

Dmitry Peskov, the man charged with sharing President Vladimir Putin's views with the rest of the world, last week denied that the Kremlin was attempting...