Ukraine's Navy is in Odessa's harbor, though it can be hard to spot.

It is tucked behind a collection of storage tanks and overshadowed by immense cargo vessels docked nearby. There are a couple dozen boats, few much larger than a decent-sized yacht and many in desperate need of repair. The government is begging the public to help pay their bills.

This is what's left of Ukraine's fleet since Russia annexed the Crimean peninsula two months ago, taking with it the Navy's key base and most of its ships.

"Times are not the best for the fleet now," admitted Captain Oleh Chubuk, spokesman for Ukraine's naval command.

The reality is far worse. Separatist unrest is battering eastern Ukraine, breakaway leaders have vowed to disrupt Sunday's presidential elections and Crimea has been annexed by Russia.

Ukraine's military is facing its worst crisis ever with a Navy that has lost two-thirds of its vessels, an Army desperate for basic equipment and a Defense Ministry that has taken to hustling 50-cent donations that people can make with mobile phone text messages. It has raised over $1 million so far that way — enough to buy one interceptor missile on a U.S. Navy warship — but military officials are thrilled.

"We will use the money to buy the things we lack, like bulletproof helmets and medical supplies," said Bogdan Buta, Ukraine's deputy defense minister.

Kiev's Western allies, meanwhile, including the U.S., have shown little willingness to help it rearm, fearing that more weaponry could upset diplomatic negotiations or provoke President Vladimir Putin even further.

The loss of Crimea, a peninsula that dangles from the Ukrainian mainland deep into the Black Sea, meant the loss of Kiev's naval headquarters as well as a series of Navy bases and all the ships and boats in port there.

This has left Ukraine with little influence over its own crisis, and, despite its long coastline and numerous ports, little power in the Black Sea.

In Odessa, the port city that is now the main base for the Ukrainian Navy, the sense of betrayal by Russia is deeply felt.

Formed after the 1991 breakup of the Soviet Union, Ukraine originally did not even think it needed a large Navy, said Evgenii Livshyts, a retired submarine captain living in Odessa. Moscow, the new naval commanders thought, would remain a friendly presence; Russia continued to base its huge Black Sea Fleet in Crimea and pay Ukraine rent for the base.

Kiev "believed that the elder brother would protect it and everything would be the way it used to be," said Livshyts. "Our attitude was: 'We do not need much … We believe you, big brother!'"

This port city, with its wide tree-lined streets and ornate 19th-century buildings, has become a tourist destination in recent years. But it was built by sailors and traders and still retains the feel of a shipping town. The oldest part of Odessa is built on a hill high above the port, and sailors, with striped uniforms that make them look as if they are stepping out from a World War II movie, are a constant presence. 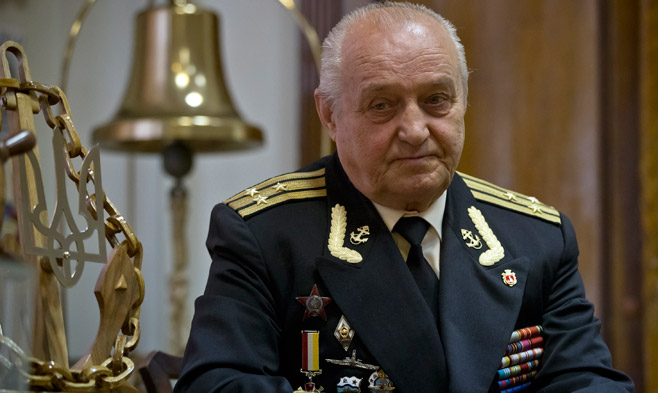 Evgenii Livshyts, a retired submarine captain living in the port of Odessa.

An undisclosed number of Ukrainian sailors switched sides to work for Russia after the takeover of Crimea, including the country's naval chief, Admiral Denis Berezovsky. But the remaining sailors insist morale has not been battered.

"You should have seen their eyes!" said Livshyts, gleeful at the memory of the Ukrainian sailors who refused to join the Russian Navy. "You can create any kind of weapon, but this spirit you cannot create it. It is just there."

For weeks after the takeover, Ukrainian sailors played cat-and-mouse games with Russian ships, trying to keep their vessels from being taken by Moscow for as long as possible. The standoffs were mostly nonviolent, with Kiev clearly fearing that dead Russian sailors could be used as an excuse for even more aggression.

Originally outfitted with castoff Soviet equipment and overshadowed by Moscow's forces, the Ukrainian military has never had it easy. Successive Kiev governments kept its funding to the minimum, and officials said former President Viktor Yanukovych, the pro-Russian leader who fled power earlier this year after months of protests, purposefully starved his own armed forces so they would pose even less of a challenge to Moscow.

Ukraine spent just $5 billion on defense last year, less than 10 percent of what Russia says it budgeted for its military.

The results have been predictable, with Ukrainian soldiers now lacking everything from training to body armor. Acting President Oleksandr Turchynov recently said the country had just 6,000 combat-ready soldiers.

The Navy, though, has fared even worse. Ukraine's fleet, so decrepit that many ships need the help of tugboats to go anywhere, was reduced from about 75 ships before the Crimea takeover to 28 afterward. Russia is slowly returning some of the ships it seized, apparently dismayed by their poor condition.

"The Ukrainian Navy was weak before, but now it is even weaker," said Pavel Felgenhauer, a Moscow-based military analyst. "They have got only one ship good for action."

That ship, the 400-foot Hetman Sagaydachniy, evaded capture because it was on its way back from an anti-piracy deployment off the Horn of Africa when Crimea was seized. The frigate's arrival in Odessa a few days later, despite announcements from Russia that it had switched sides, was a big morale boost.

Felgenhauer is not surprised at the high morale. Despite its long history of troubles, and its desperate lack of funding, Ukraine's military now seems intent on rebuilding its armed forces.

"They are trying to put their act together and fill their ranks with volunteers," he said.

Chubuk agreed, saying the Navy is now "trying to spread its wings."