Foreign Minister Sergei Lavrov left many people scratching their heads when, during a Moscow news conference last month, he insisted that Russia is not meddling in Ukraine in any way. Meanwhile, Russian leaders and the state-controlled media have repeatedly criticized the U.S. for meddling in Ukraine and destabilizing the country.

Here are the top five Russian myths about U.S. meddling in Ukraine and why they hold no water:

1. The U.S. has no legitimate national interests in Ukraine.

First, the U.S. was a co-signer, along with Russia and Britain, of the 1994 Budapest Memorandum, which guaranteed Ukraine’s territorial integrity in exchange for its giving up nuclear weapons. This alone provides Washington a legal, if not moral, imperative to support Kiev after its territorial integrity was violated during the Russian invasion of Crimea.

Russian troops had the legal right to be located at the Sevastopol naval base it rented from Ukraine, but they had no right to leave the base, tear off their insignias and assist the pro-Russian “local self-defense groups” across the entire Crimean peninsula when they seized government and military installations and installed a Kremlin-loyal prime minister.

Any referendum held in what was essentially a territory occupied by foreign troops is considered illegal and illegitimate by all international norms. This would be like U.S. troops leaving their base in Guantanamo Bay, seizing an adjacent Cuban province of 2 million people, taking over Cuban government buildings, installing a pro-U.S. leader there, and holding a referendum allowing the U.S. to annex the Cuban province. Any attempt to justify this annexation as “returning Cuban territory to the U.S. that was rightfully gained in the Spanish-­American war in 1898” would be dismissed as an absurd throwback to 19th-century colonialism. 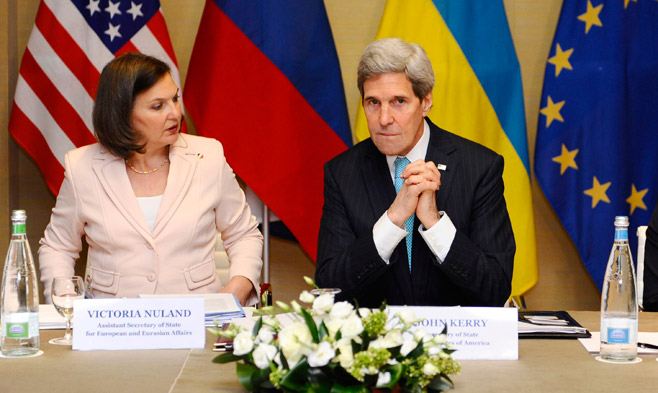 Second, Ukraine is the sixth-largest European country by population and borders four NATO allies. The U.S. has a legitimate security obligation to help its NATO allies maintain stability in its own backyard. Any military conflict in Ukraine would have direct security implications for these four neighboring countries — and other NATO allies as well. The Baltic states, which were forcibly annexed by the Soviet Union in 1940, and Poland, which has a long history of being a vassal of Moscow, have a particularly compelling interest in obtaining U.S. security guarantees if Russia further violates the territorial integrity of Ukraine. Romania, another NATO ally, will also look for U.S. support if the Ukrainian conflict spreads to the self-proclaimed Transdnestr republic.

2. The U.S. orchestrated the Maidan protests.

The roots of the Maidan protests were entirely domestic. Tens of thousands of demonstrators protested for months against the lawlessness, corruption and abuses of former President Viktor Yanukovych. It was not the U.S., but widespread outrage at Yanukovych that consolidated a diverse group of protesters — including Donbass miners, Ukrainian nationalists and tens of thousands of average citizens of all stripes — in a grassroots protest movement on Maidan.

3. The U.S. financed the Maidan protesters.

Pro-Kremlin political analysts and the state-­controlled media claimed that the U.S. State Department funneled billions of dollars directly to the anti-Yanukovych opposition movement as part of a larger U.S. agenda to orchestrate regime changes all over the world. Pro-­Kremlin journalist Dmitry Kiselyov recently said on Rossia 1 television that this money was transferred via diplomatic mail from Washington to the U.S. Embassy in Kiev and then on to the protesters. But these claims are completely groundless.

Yes, the U.S. State Department spent about $5 billion in Ukraine, but this money — which was spread out over 20 years, long before Maidan — was spent on programs promoting civil society and on charitable programs. U.S. law prohibits the funding of opposition leaders and movements, and there have been no violations of this law in Ukraine.

The objective of these U.S. government programs is as simple as it is self-serving: to spread U.S. “soft power” to other countries so that millions of grant recipients will think positively about the U.S.

The reason for the civil society development programs is also simple: The more democracies there are in the world with strong civil societies and institutional checks and balances, the more stable the world becomes. After all, as the old argument goes, democracies rarely fight each other.

The only problem with these State Department programs is that they are rarely successful in autocracies, where civil society, by definition, poses an existential threat to their “vertical power structures.” Notably, in the 1990s, when the Kremlin was committed to building a civil society, the government welcomed these State Department programs with open arms. Yet under Putin, in 2012, USAID was expelled from the country. 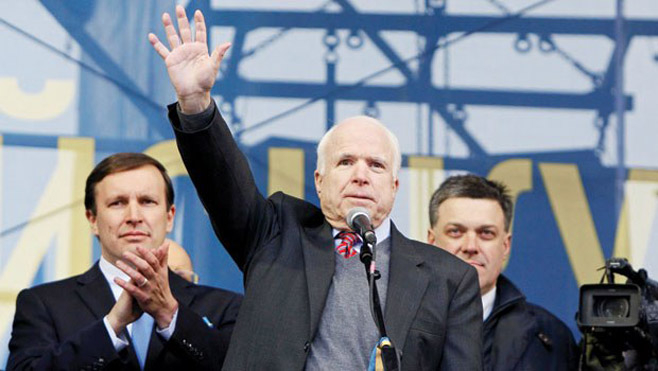 4. U.S. support for the interim government in Kiev is meddling in Russia's backyard.

After Yanukovych fled Ukraine and Russia cut off its financial aid package to the country, it was natural that Kiev would turn to Europe and the U.S. for assistance. What did the Kremlin expect? Did it expect that the U.S. — just to avoid upsetting Russia — would turn its back on Ukraine, which was on the verge of bankruptcy and facing violent separatist attacks in roughly one-third of the country after having lost 5 percent of its territory to Russian annexation?

Every country supports its allies. If Russia has a sovereign right to support its allies — for example, Syria, Cuba, Venezuela and Nicaragua — why should the U.S. not support Ukraine — including, yes, intelligence support and FBI agents who are trying to help Kiev return some of the billions that Yanukovych may have taken out of the country? This is what allies do.

Notably, U.S. President Barack Obama has refused to provide military weapons to Kiev to avoid escalating the conflict into a Cold War-like proxy war, something that should not be lost on Moscow.

5. The U.S. is guilty of “luring” Ukraine into its sphere of influence.

U.S. support for Kiev is clearly a sensitive issue for the Kremlin because of Ukraine’s geostrategic importance for Russia. But blaming the U.S. because the majority of Ukrainians prefer Western values and institutions is clearly shifting the argument away from the real problem: Russia has lost the “values battle” in Ukraine. That would be like blaming the Baltic states — or the U.S. for that matter — for their desire to join the EU and NATO after the Soviet collapse.

After 70 years of being part of the Soviet Union and after nearly four years of Yanukovych’s rule, most Ukrainians have had enough of autocracy. Not surprisingly, polls over the past year have consistently shown that most Ukrainians want their leaders to adopt Western economic and political models for the country — above all, government transparency, a strong civil society, a healthy climate for small businesses, independent courts and institutional checks and balances against government abuse.

Ukrainians need not look any further than their neighbor to the west — Poland — where democratic, rules-based institutions and a free-market economy have helped Poland increase its standards of living by three times since the Soviet collapse. Meanwhile, Ukrainians’ standards of living have dropped over the same time period.

Therein lay Yanukovych’s fatal mistake. After giving Ukrainians hope that he would sign the EU Association Agreement, Yanukovych did an abrupt about-face in November and signed an inside deal with Putin. This betrayal was the main catalyst for the Maidan protests.

Russia’s blaming the U.S. for Ukrainians’ shift toward Western values and institutions is absurd. It would be as if an abusive husband, who, after beating his wife for years, blames her new husband for the fact that she filed for divorce and remarried.

No one knows the future, but what we predict reveals who we are.
opinion Alexandra Borissova

“One-third of Russians believe that the sun revolves around the earth” is good clickbait, but it does not truly represent reality.