DONETSK, Ukraine — To reach the People's Republic of Donetsk, you need to pass a few club-wielding young men in masks, wind through a narrow corridor of sand-filled sacks and enter a gray office tower standing in the heart of this eastern Ukrainian city.

The self-styled autonomous territory — really just an 11-story government building and its surroundings — insists it is the true voice of the 4.3 million people living in the Donetsk region. It has become the latest focus of protest in the largely Russian-speaking east since Kremlin-friendly President Viktor Yanukovych was overthrown in February.

The patch of Donetsk real estate where pro-Russia activists have been squatting for nearly a week is a hotbed of resentment against the perceived chauvinist Ukrainian nationalism taking hold among the nation's leadership.

"They hate us. They take it in with their mother's milk," said retiree Nelya Ivanova, sitting along with hundreds of fellow rally members on the square.

In its current form, the Donetsk Republic poses little real threat to the central government's authority, and rallies demanding autonomy have drawn at most a few thousand people.

Nonetheless, Prime Minister Arseniy Yatsenyuk visited Donetsk on Friday with a pledge to give more powers to the regions.

"We must tell people that we know it is tough, but we know how in the future to secure jobs, increase salaries, attract investors, distribute more authority, and what to do so people are content with life," Yatsenyuk said, laying out what he described as a recipe for national unity.

And some Donetsk residents say the Republic's hostility to western Ukraine does not represent their views.

Vladlen Nebrat, a youth activist, said that most people in the city see few differences between Russians and Ukrainians, and that younger generations see even less of a difference.

"The problems we see today are problems created by political elites," Nebrat said. "It is the same in Russia and Ukraine. I do not see a problem between the people themselves."

Since Sunday, crowds of hundreds have been standing round the clock in and around barricades of tires, sandbags, bricks and razor wires lining the regional administration headquarters in nervous anticipation of a raid that never arrives. Masked young men carrying bats and truncheons stand guard over the area. Groups huddle around barrel fires for warmth against an early spring spell of drizzle and cold.

On an improvised stage, orators deliver angry speeches, often to chants of "Referendum!" — demanding a vote for total autonomy that constitutes the only clear policy of the Donetsk Republic, whose leadership is a ragtag band of about a dozen political unknowns.

The movement is a pale imitation of the secessionist drive in Crimea that led to Russia's annexation of the peninsula. But the palpable unhappiness here points to deeper national tensions.

Much of the conversation on the square revolves around well-rehearsed grievances over language, history and a sense of economic injustice.

After Yanukoych's downfall, a nationalist party handed opponents of the new authorities a valuable lifeline by pushing measures through parliament to strip the Russian language of its official status in regions where it is widely spoken.

The idea was swiftly rejected by the president, but the damage was done. Feverish speculation, all eagerly spiced up by Russian state television, has for many inflated the significance of a half-baked language proposal into a confirmation of Russian speakers' worst fears.

"The first thing they did was to deprive us of the right to speak our language," Ivanova said. "But this is not just the language we use to speak, we think in this language as well." 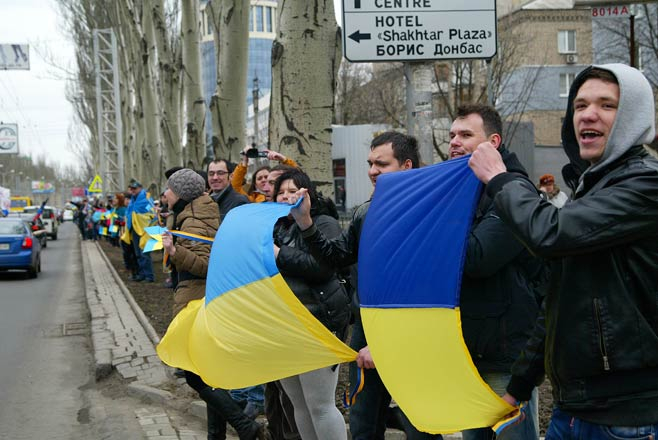 Language is something of an illusory fault line, since Russian — claimed as a native language by  one-third of the population — and Ukrainian are similar enough to be mutually understandable by almost all the population.

Donetsk Republic supporters say the boundaries of Ukraine in its current form are something of an anomaly — its eastern borders drawn in the early Soviet period, and the western ones during and after World War II. While they struggle to articulate any specific distinguishing values, it is clear that they see an alien nation in western Ukraine, which is often dismissively referred to as Galicia, the name of a historic Central European territory.

"In Galicia, they are Poles and Austro-Hungarians," said Donetsk resident Lena Marchuk. "We are totally different. You cannot glue us together. We have never loved them."

Yet Marchuk herself conceded that her own typically Ukrainian surname and Belarussian and Russian family heritage complicate attempts to draw ethnic and cultural distinctions in a country like Ukraine.

Instead, references are often made to the legacy of Nazi collaboration among Ukrainian nationalists in the west during World War II. The name of the leading Ukrainian nationalist insurgent, Stepan Bandera, who aided Nazis invading the Soviet Union, is used as a curse word by opponents of the government in the capital, Kiev.

A prominent role was played in the late, violent stages of the anti-Yanukovych protests by the largely marginal nationalist Right Sector movement, distinguishable for its adoption of the black-and-red standard of the war-era Ukrainian Partisan Army. The post-Yanukovych Cabinet includes several figures from the nationalist Svoboda party, which has aligned itself in the past with far-right groups in Western Europe.

These associations have earned the government a reputation among its most ardent critics as a "fascist junta."

Anxieties over the loss of language and other rights for Russian speakers, expressed by the Donetsk Republic, seem to be overstated. Interviews with 1,200 residents of Ukraine found that 74 percent of ethnic Russians living in the east and south of the country did not feel under threat because of their language, according to research by the Baltic Surveys Gallup Organization polling groups.

A potent and often aired gripe is that eastern Ukrainian regions, home to vital heavy industry that scars the landscape and wreaks incalculable damage on health, does not get its fair economic dues.

"We want them to stop taking all our money through taxes," said Oksana Zherelnikova, who lives in a village outside Donetsk. "Many people in western Ukraine go off to work abroad in the spring and do not pay taxes. We stay here."

Donetsk, however, receives large government subsidies to support its heavy industry. And with this support inevitably to be slashed in line with requirements from International Monetary Fund creditors, an already lingering sense of injustice is only likely to deepen.

Yatsenyuk's decision to travel to Donetsk may go some way to mitigating another bone of contention in the east: that senior officials in the new administration have almost entirely failed to visit the region since the fall of Yanukovych.

Remarks by Yatsenyuk to local officials hinted at a vague compromise on devolution.

The government in Ukraine has bristled at insistence that it push through federalization — not least when those calls come from Russia — but that may ultimately be what is needed to stop more adventures in self-determination.

"As the old saying goes, better a bad peace than a good war," Zherelnikova said. "We could live in a united Ukraine, but only if we can follow our own way."

Russia experienced its largest population decline in 2021 since the end of the Soviet Union.
TAMPING DOWN TENSIONS