Russian leaders often look uninformed — or desperate — when they try to justify abuses of power by claiming that the U.S. is guilty of similar infractions.

Take, for example, President Vladimir Putin's comparison of Russia's selective legal assault against Yukos — and the subsequent expropriation of most of Yukos' assets into state-controlled Rosneft — with the U.S. prosecution of Enron in 2003.

The U.S. annexed Hawaii and Texas, so why can't Russia annex Crimea? Russia is living in the 19th century, pursuing its own manifest destiny.

In September 2012, Putin, responding to international criticism of the prison death of lawyer Sergei Magnitsky, said that the U.S. had no right to judge Russia because it executes convicted criminals at home. The Foreign Ministry took this argument further, saying in its 2012 report on U.S. human rights violations that the U.S. executes minors, which is a blatant falsehood.

Russian authorities also fired back at U.S. criticism of Russia's record on free speech by asserting that the U.S. violated the rights of former Private Chelsea (Bradley) Manning, jailed for leaking 700,000 classified documents to WikiLeaks.

Now, the Kremlin has adopted the same flawed "look who's talking" argument to counter criticism of its annexation of Crimea. Here are six more myths that Russia is fond of spinning.

1. All great powers annex territory. Look at the U.S., which unabashedly annexed Texas and Hawaii.

It is true that the U.S. annexation of Texas in 1845 was a vivid example of manifest destiny, imperialism and promoting the interests of the powerful, slaveholding class in the South. The Texas annexation, which extended the state's border to the Rio Grande river, was a clear act of provocation against Mexico, which had historical claims to parts of Texas. The annexation sparked the Mexican-American war of 1846-48, which the U.S. won, giving it ownership of a huge swath of western territories from Colorado to California.

Similarly, Hawaii was annexed in 1898 after the U.S. orchestrated a coup overthrowing the Hawaiian monarchy in 1893. The main economic motive of the coup was to exploit Hawaii's sugar wealth and promote the interests of the five largest U.S. sugarcane-processing corporations working on the islands.

But it is odd that Russia is pointing to a 19th-century U.S. imperialist model of expansion to justify its annexation of Crimea. Is Russia still living in the 19th century, pursuing its own form of manifest destiny? Clearly, the post-World War II world order, which is based on United Nations-based system of international law and respecting the territorial integrity of other nations, rejects these crude 19th-century and early 20th-century land grabs. 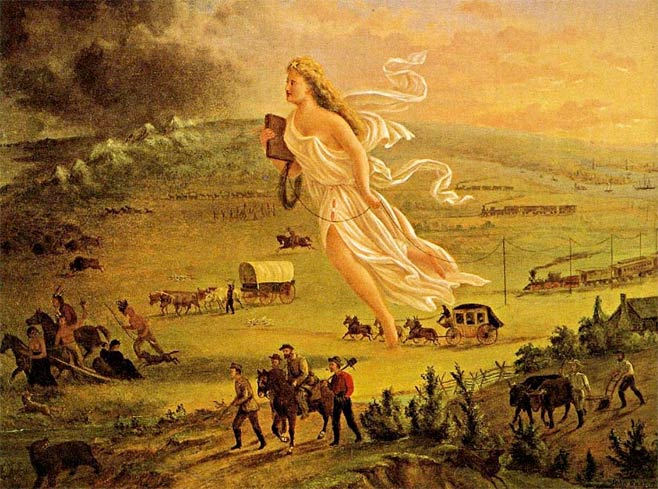 
2. Agreements can be annulled if the president who signed them was weak.

Russia recognized Crimea as an integral part of Ukraine in the 1994 Budapest Memorandum on Security Assurances, signed by President Boris Yeltsin.

But Putin supporters say Yeltsin was a weak president, did not defend Russia's interests and essentially signed an "unequal treaty." Therefore, they argue, the Budapest agreement can be discarded — a prerogative that comes with being a strong global power under Putin.

Had Ukraine kept its nuclear weapons, it is unlikely Russia would have sent its forces into Crimea proper, installed a Kremlin-friendly prime minister in Simferopol, kicked out the Ukrainian armed forces from Crimea, and annexed the peninsula.

There are two morals to this story: One, do not give up your nuclear weapons. Two, if you are a small, non-nuclear state, start a nuclear weapons program as a check against annexation by an outside power. The Crimean annexation not only throws the entire post-World War II framework out the window. It also undermines the foundation of the 1968 Nuclear Non-Proliferation Treaty that says all countries should strive toward nuclear disarmament and nonproliferation.

3. Crimea wasn't "annexed." It was "unified" with Russia, just like the German unification in 1990.

The German reunification was agreed upon by West and East Germany, along with the Soviet Union and the three other occupying powers. The German unification treaty was in full compliance with international law and norms. In contrast, Ukraine categorically opposed what the Kremlin calls "Crimea's unification with Russia" and considers the annexation illegal, as do many other countries.

A comparison with the 1982 Falklands War between Britain and Argentina also fails because Britain did not annex anything. It responded militarily to Argentina's invasion of the Falkland Islands, which were Britain's overseas territories at the time.

In contrast, Crimea has been internationally recognized as Ukrainian territory since the Soviet collapse, so Russia's invasion of the peninsula can be classified as military aggression and a clear violation of Ukraine's sovereignty. 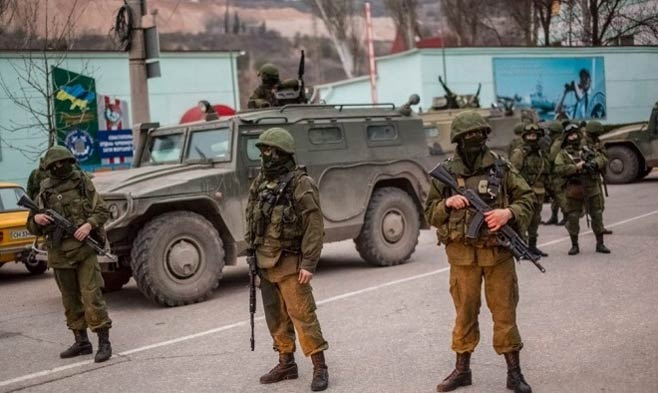 Troops believed to be from the Russian Army patrolling Crimea before the referendum.

4. Russia needs to defend the interests of Russian speakers in Crimea.

The first problem is that there was no evidence that Russian speakers in Crimea were under threat from Ukrainian "fascists" and ultranationalists.

The second and more fundamental problem is that the justification of protecting Russian speakers in Crimea is absurd at its core. There is a generally accepted international principle of a country's right and obligation to protect its citizens abroad. But this obligation does not extend to people who simply speak its native language. On these grounds, France would have a legal basis to annex part of Cameroon or Senegal if French speakers were under threat. Would the U.S. and Britain, then, have to fight over who had the right to defend English speakers?

In Georgia's breakaway regions of South Ossetia and Abkhazia, Russia managed to mass-distribute Russian passports to local residents to provide a pretext for its military intervention in 2008. In Crimea, however, Russia did not have this luxury because it had to act quickly once Ukrainian President Viktor Yanukovych fled. Indeed, "Operation Annex Crimea" — from Russia's initial incursion to the Russian-Crimea treaty signing — was completed in only 18 days.

5. Russia adheres to the United Nations principle that military intervention in another country is justified only with the approval of the UN Security Council.

Putin and the Foreign Ministry have made this argument many times, and it served as the basis for Putin's 2007 Munich speech that condemned U.S. unilateralism. Yet Russia completely disregarded this principle in both the 2008 Russia-Georgia war and in Crimea.

Russia decided the fate of the peninsula with no regard for the protests from Ukraine, which had the legal rights to the territory. This would be like Germany sending troops into the Russian exclave of Kaliningrad, occupying government buildings and military installations, appointing a pro-German governor, and holding a referendum — all without the consent of Moscow. Russia would never accept this German attempt to "rectify the historical injustice done to Konigsberg," even if most Kaliningrad residents would be willing to swap their Russian passports for German citizenship. 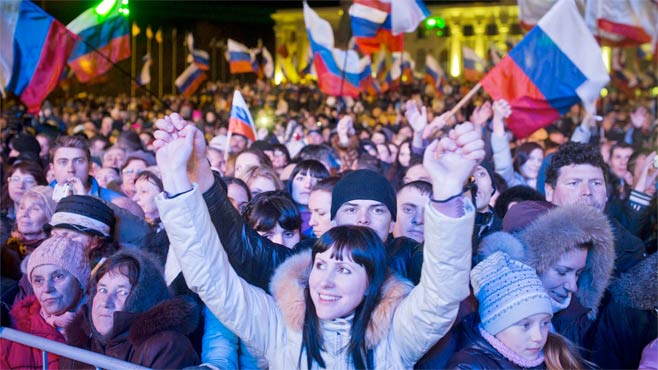 6. The U.S. has no moral right to condemn Russia for violating international law in Crimea.

The issue here is not so much Washington's moral right, given its own history of double standards, to criticize Moscow, as it is a global imperative to condemn Russia's annexation of Crimea.

In the post-World War II world order, no nation has a "sovereign right" to forcefully annex another country's territory. This applies to all countries, including the U.S. The international community, not the U.S. alone, should be unified in condemning Russia's annexation of Crimea. The UN General Assembly took a first step in this direction on March 27 when it voted 100-11 to condemn the Crimean annexation.

Perhaps the best example of when the global community came together against illegal annexations was after Iraqi leader Saddam Hussein annexed Kuwait in 1990. Like Russia, Hussein considered Kuwait to be a historical part of Iraq dating back to the Ottoman Empire. And like Putin, Hussein also tried to rectify a "historical injustice" through annexation. Most of the world condemned Iraq's annexation of Kuwait, and the UN Security Council, including the Soviet Union, voted in favor of Resolution 678, which was the legal foundation for the 1991 Gulf War that drove Iraqi forces out of Kuwait. This global collective responsibility to condemn military aggression should apply to Russia, as well.

French poet Jean Cocteau once said: "Man seeks to escape himself in myth. … Lies and inaccuracy give him a few moments of comfort." Perhaps they do. But with the Crimean annexation turning the world order on its head, the international community is obligated to make the Kremlin feel as "uncomfortable" as possible if it hopes to maintain global peace, stability and security.

Moscow’s decision to hold “referendums” in the occupied Ukrainian regions about joining Russia was both expected and unexpected. Expected...