KALININGRAD — University student Darya Kiriyichko has an allergy to alcoholic beverages. She had a drink during her coming-of-age birthday party and ended up in hospital. But her forced sobriety does not mean alcohol has not played a role in her life.

Kiriyichko, 21, saw firsthand what happened to her high school classmates when they developed drinking habits. Her brother is now of legal drinking age and Kiriyichko, who works part-time at a grocery store, thinks of him when she sees minors trying to buy booze.

"I get scared when I remember what happened to my classmates," she said. "I do not want to sell alcohol to a minor, even if there is an older person with him who has the right documents. I know very well that this could have been my brother."

Russia is dogged by a slew of alcohol-related problems, including excessive consumption, widespread counterfeiting, drunk driving and underage drinking. Five million youth, 11 to 18 years old, regularly drink alcoholic beverages, according to the Federal Consumer Protection Service. About 11,500 are officially classified as underage alcoholics.

It is against the law for retailers to sell alcohol to customers under the age of 18, but many cashiers wind up selling to minors, either because they cannot be bothered to check their age or they just want to avoid conflict.

This practice hits hard not only on the health of the youth, but also the public image of the retailers and alcoholic drink manufacturers. Some companies have decided to take corporate social responsibility seriously.

Dutch brewery Heineken, which has eight factories in Russia, commissioned a team of professional coaches and psychologists to create the program ".NET," which aims to stop underage drinking at the checkout counter by training cashiers and human resource managers at partner retail outlets.

At 8:10 a.m. on the morning before her training session, Kiriyichko had to fend off a group of men trying to buy a bottle of cognac. Officials tightened laws on alcohol sales in recent years and it is now forbidden for retailers to sell booze between 11 p.m. and 8 a.m.

Kiriyichko managed to break the news to the customers so gently that they left the cash register laughing and even took the initiative of putting the bottle back on the shelf. The same soothing tone should be applied when dealing with minors who want to buy alcohol, she said.

The ban on alcohol sales to minors is not new, but fines have been beefed up and retailers can now lose their license if such incidents are discovered. This puts a double burden on cashiers — they must follow the law, but without alienating their customers.

"The goal of this training is to refuse in such a way that a person leaves with a good feeling," said Svetlana Malinovskaya, personnel manager at Vester, a retail chain that has joined Heineken on the ".NET" project in Kaliningrad.

Confrontations between minors and cashiers are common. Underage customers often offer excuses for forgetting their passports, laugh off suggestions that they are minors or beg that exceptions be made, said Lyudmila Galitskaya, who has worked as a cashier for 14 years.

"Young people curse and argue and claim their rights are being violated. But in the end they still go to get their passport. What else can they do?" Galitskaya said. 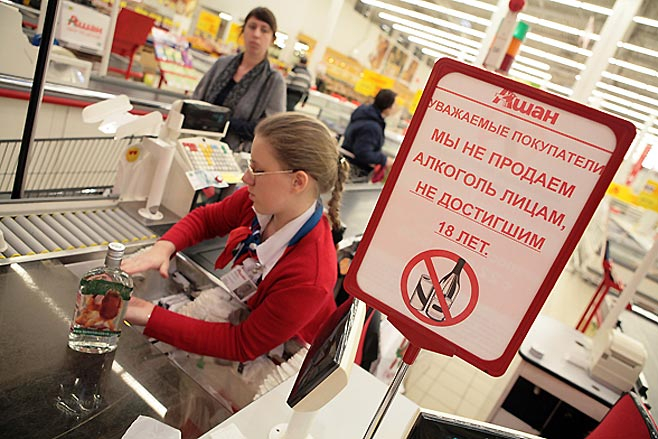 A cashier sits by a sign forbidding the sale of alcohol to underage buyers.

"People who know that they look older start to press on you. They say things like, 'But I have a beard! I have a moustache,' 'Look at the size of my chest!'" Kiriyichko said. "It can get quite awkward."

At the training, cashiers did role-playing exercises. Based on how effortlessly participants portrayed minors — from whining young girls to rebellious, anti-establishment youth — it was clear they had experience with such characters.

There are fewer conflict situations now than during the first months after the law became more severe in 2010. Kiriyichko witnessed a customer assault a cashier when the new rules were introduced. Now young people come ready to show their passport, while older customers take the request for identification as a compliment, Kiriyichko said.

"People react more gently to requests to show their passports," Galitskaya agreed. "They realized that this is how things should be. It became the norm."

Policemen regularly carry out raids on retailers in Kaliningrad to check that they are not selling alcohol to minors. There is also a youth organization, Trezvyiye Pokoleniya, or Sober Generations, that sends secret shoppers to grocery stores every month.

Vester employees have passed all the tests, but the chain's managers were still eager to put them through the extra ".NET" training to refresh their knowledge and emphasize the importance of following the rules, Malinovskaya said.

Heineken cultivates responsible retailing initiatives in other countries, including the Netherlands, Britain, Poland, Croatia and Indonesia.

In Russia, the ".NET" project involves large retail chains in Kaliningrad, Novosibirsk and Yekaterinburg — which were chosen based on the geography of Heineken's factories. Retailers were selected based on their long-term commitment and willingness to help facilitate the training sessions.

More than 450 retail employees have already received this training in Russia.

For Vester it is a chance to get a leg up on the competition in the crowded Kaliningrad market, Malinovskaya said. It helps the retailer to attract socially conscious employees and avoid paying fines for violations.

But while large retail chains can afford to send their employees for day-long training sessions and monitor their compliance with the law, smaller stores rarely have this luxury. Instead, smaller stores tend to earn a large chunk of their profits from alcohol sales and are loathe to curb them, said Gennady Abramov, director overseeing food safety at Vester. Either that, or they do not have the resources to teach their staff about the law, he added.

Young people know about these weak spots and go to the small stores to stock up on booze.

"I see how some of the youths in my neighborhood are deteriorating," Vester's Malinovskaya said. "If we continue to shut our eyes, this will continue, generation to generation."

Malinovskaya said that though she cannot control what happens elsewhere, at least she knows that when it comes to her stores the best thing minors can hope for as a celebratory beverage is an energy drink.

Which for her means one less youth with a bottle of alcohol.