Here is Crimea's history in brief: It had been Russian territory since 1783, when Catherine the Great seized it from the Ottoman Empire.

Revoking agreements on the territorial integrity of nations is dangerous. It opens up a Pandora's box that destroys global stability and security.

Then, in 1954, Soviet leader Nikita Khrushchev transferred Crimea to Ukraine as a "gift" to mark the 300th anniversary of Ukraine's union with Russia. But this was a symbolic gesture only, the argument goes. After all, Crimea, Ukraine and Russia were all part of one large country in 1954, so any administrative shifting of internal borders were largely meaningless outside of the Soviet Union. Khrushchev never imagined that several decades later — in 1991, when Ukraine declared independence from the Soviet Union — Moscow would lose control over a peninsula that Catherine the Great called "the pearl of the Russian Empire."

To help correct this "historical injustice," a bill was introduced to the State Duma on Monday to officially revoke Khrushchev's "reckless and arbitrary" gift to Ukraine. This is the Kremlin's way of setting the record straight, lest anyone think that Crimea was ever Ukrainian territory — even symbolically.

But what about that pesky 1994 Budapest Agreement or the 1997 Treaty of Friendship, both of which were signed by Russia and recognized the territorial integrity of a Ukraine that included Crimea?

These agreements were also "historical injustices," the supporters of Crimean annexation say, because Russia was terribly weak in the 1990s under President Boris Yeltsin and could not stand up for its rights — and its possessions — as President Vladimir Putin is doing now.

"Russia was not just robbed; it was plundered," Putin declared on Tuesday in a speech, denouncing Yeltsin's decision to allow Crimea to remain a part of Ukraine after the Soviet collapse. After the speech in the Kremlin to several hundred members of the political elite, Putin signed the treaty recognizing Crimea as Russian territory.

Now, with the annexation of Crimea all but completed, it would seem that Russians and Crimeans have received compensation for Khrushchev's and Yeltsin's "plundering" of Russia, and a great historical injustice has been reversed.

But why stop at Crimea?

If Putin is committed to reversing all of the historical injustices committed against Russia, why not revoke the Belavezha Accords, signed on Dec. 8, 1991? After all, Yeltsin and the leaders of Ukraine and Belarus had no legal authority to dissolve the Soviet Union. Putin reiterated his stance on March 12, reportedly telling the head of the Crimean Tatars that Ukraine's declaration of independence in 1991 had no legal foundation.

In Tuesday's address, Putin scorned Russia's weakness and inability to defend Crimeans in 1991. "Russia handed the Crimeans over to Ukraine like bags of potatoes," he said. "Russia dropped its head and swallowed the loss … but the people could not come to terms with this historical injustice."

But to Putin, the Soviet collapse was more than just a historical injustice. It was "the greatest geopolitical catastrophe of the 20th century," as he famously put it in a 2005 address to the nation. 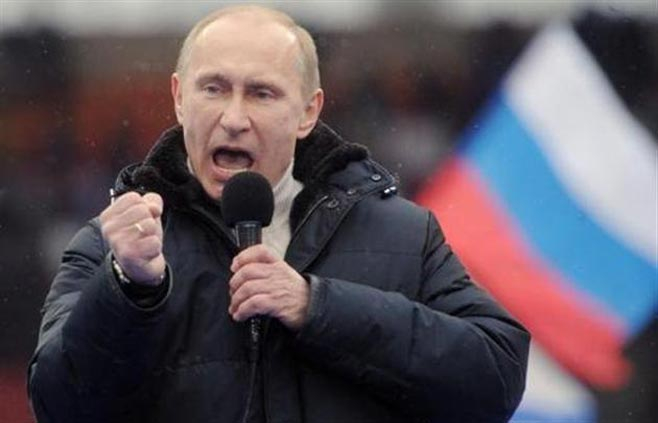 Putin's firm conviction that the Soviet collapse was historically unjust is understandably causing alarm in other Soviet republics. Ukraine is most concerned, of course, but Kazakhstan is also uneasy, where about 30 percent of the population concentrated in Kazakhstan's northern regions on Russia's border are ethnic Russian. Might Putin, like in Crimea, decide to "defend the interests of Russians" in Kazakhstan, too?

What's more, the Kremlin could use the Crimea argument that Kazakhstan is also historically Russian territory. After all, Kazakhstan was a part of the Soviet Union for 70 years. What if Putin wants to rectify the "historical injustice" of having lost Kazakhstan in 1991? Even Soviet dissident writer Alexander Solzhenitsyn considered the northern territories of Kazakhstan to be "southern Siberia." This view is shared by modern-day nationalistic "Eurasianists" such as Alexander Dugin.

Russia could even go back to the 1918 Treaty of Brest-Litovsk. Like the Belavezha Accords, many believe the treaty was forced upon Russia when the country was weakened by World War I. In accordance with the 1918 treaty, Russia had to give the Baltic states to Germany. And to add insult to injury, the treaty forced Russia to recognize the independence of Ukraine. (The Bolsheviks got their revenge four years later, however, when Red Army seized power and installed a puppet government that "voluntarily" joined the Soviet Union in 1922. Then, 70 years later, Ukrainians rectified this historical injustice by declaring independence from the Soviet Union in 1991.)

Hitler, too, used the "historical injustice" argument, claiming the 1919 Treaty of Versailles placed overly harsh conditions on Germany after its loss in World War I. Hitler tried to rectify these injustices by annexing Austria in 1938, among other things.

Associate editor Christopher Brennan and opinion editor Michael Bohm discuss Putin's desire for a historical legacy versus his reputation as a master tactician.

But why stop correcting perceived historical injustices with Crimea, Kazakhstan and the Baltics?

Putin could also raise the issue of Alaska. Taking advantage of Russia's weak financial condition after its disastrous loss in the Crimean War of 1853-56, the U.S. bought Alaska from Russia in 1867 for a mere $7.2 million. Adjusted for inflation, that amounts to only $120 million - highway robbery, as many Russians see it. If Putin corrects this historical injustice by revoking the original purchase agreement, he would surely have the support of Russians who believe that Alaska rightfully belongs to Russia.

To be sure, Russia's reliance on rectifying supposed historical injustices is a slippery one. Take, for example, Crimea itself. Turkey could turn Russia's argument on its head and say Crimea is historically part of Turkish territory.

So could the Crimean Tatars, who lived in large numbers on the peninsula for more than 500 years before Josef Stalin deported them in 1944. Don't they have a right to correct their historical injustices as well?

In addition, Poland could say Lviv and other western regions of modern-day Ukraine were historically Polish territory before Stalin annexed them after World War II.

And then there are the four disputed islands in the Pacific Ocean that Russia calls the Kurils and Japan says are the Northern Territories. Japan claims that two of the islands are not covered by post-World War II treaties and that Russia's "occupation" of them is historically unjust, if not illegal.

Taking the "historical injustice" argument to its logical conclusion is precarious. Borders in Europe and elsewhere have changed so many times as a result of wars and revolutions that the only way to agree on territory integrity is to sign agreements — such as the Budapest Agreement that established the territorial integrity of Ukraine in 1994. But once these agreements are revoked in the name of "rectifying a historical injustice," as Russia has done with Crimea, a true Pandora's box is opened up — one that can easily destroy global stability and security.

It is no surprise, then, that many people in Ukraine and around the world are afraid that Putin is planning to annex other parts of Ukraine. Just three days before Putin's speech, Russian troops entered Ukraine proper and seized a gas terminal.

Putin offered a vague assurance Tuesday that "we do not need a partition of Ukraine." At the same time, however, he reiterated his commitment to protecting Russians in Ukraine if the Kremlin felt they were in danger. Furthermore, he offered little comfort to Ukrainians by referring in his speech to the eastern parts of Ukraine as "the historical south of Russia."

If Putin does decide to annex the eastern parts of Ukraine, this would not only be a gross historical injustice on its own, but it could also be the largest catastrophe of the 21st century.