KIEV — Ukrainian museum caretaker Valentin knows what it is like when Moscow sends in troops to occupy a reluctant ally — he was there, in a Red Army uniform, when Soviet tanks rolled in to crush the Prague Spring in 1968.

"We were the occupiers then. Now we are the ones who are being occupied by the Russians," he said, shaking his head at the irony of history which sees Ukraine — long Moscow's closest partner — losing Crimea after Sunday's Kremlin-backed referendum there and fearing further invasion from the east.

But, surveying the Kiev war museum's display of tanks and combat aircraft, he said President Vladimir Putin must beware.

As Ukraine's government called up troops and television ran images of Ukrainian armor on the move to a soundtrack of anti-Soviet patriotic songs, he said the nation of 46 million would be no pushover: "We would resist. There would be a partisan war."

On a blustery weekend on the banks of the Dnieper, the 100-meter tall, sword-wielding statue of "The Motherland," a hammer and sickle on her shield, towered overhead. It serves as a reminder of the common cause Ukrainians and Russians died for side-by-side in their millions during World War II and which Putin says Ukraine is betraying by turning to "fascism" and an embrace by the West.

"Us, fascists?" asked Valentin. "They are the fascists," he said, likening the "referendum at gunpoint" he expects to annex Crimea to the invasion he was part of as a young conscript, when Soviet leaders claimed to have been invited by Czechoslovakia to lend "fraternal help" against a purported right-wing plot.

Putin uses the role of far-right groups in last month's overthrow of his elected ally in Kiev to brand Ukraine's new leaders as neo-Nazis and to warn he may send troops to "protect" citizens of the "brotherly state." That offends staff and visitors to the memorial park, whose anger and confusion over a possible war reflects emotions felt by many in the capital.

"It's an insult. We were all together. Now we would like to be on our own — but friends," said Viktor, in his 40s, as he surveyed an exhibit that included the iconic T-34 tank which helped liberate Ukraine in 1944 and a Cuban Crisis-era missile launcher from the 1960s. "They just do not want to let us go."

As shown by Crimean voters and eastern protesters seeking autonomy, many Ukrainians feel cut off from a Russian homeland by arbitrary post-Soviet borders. But they are in a minority, albeit concentrated in big, industrial cities near Russia.

For old soldier Valentin, Putin's action could "backfire." "He is pushing us into the arms of the EU," he said, echoing a widespread view in Kiev after two uneasy decades trying to balance relations between the Kremlin and the West.

Svetlana, visiting from Poltava in the east, blamed Putin and corrupt Ukrainian leaders for the situation: "It is just terrible that people are talking about war. It is worrying."

A poll last week confirmed that few Ukrainians — about 3 percent — want to go to war to defend their territory, including Crimea. But appeals for support for the armed forces, including troops blockaded in bases in Crimea, and last week's formation of a new National Guard are contributing to a more martial mood.

On Kiev's Independence Square, the Maidan where bloodshed brought down President Viktor Yanukovych, camouflage-clad ultranationalists proud of forebears who fought Soviet rule say they are ready to fight again, this time against Putin's Russia.

"We will push them all the way to Siberia," said one, who gave his name as Mykola. The Ukrainian government has urged militants to keep back, well aware that Russia cites their activities as proof of a threat to ethnic Russians that Kiev cannot control.

And another militiaman, Serhiy, was cautious: "We need a peaceful solution," he said. "If not, it will be World War III." 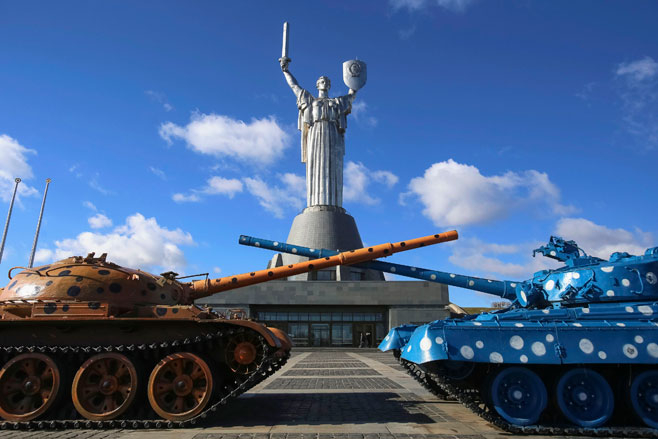 “The Motherland” statue standing in front of two painted tanks in Kiev.

Such fears are shared across the square, still barricaded and littered with the debris of three months of demonstrations and makeshift shrines to 100 dead protesters. In the modern, plate-glass shopping mall overlooking Maidan, shopkeepers said business is slowly picking up and they hope to keep it that way.

Irina Tsarynok, 43, can survey the scene from her travel agency, offering getaways to foreign beaches — though, she says, no longer the more local trips once vital to the Crimean economy.

"There is now real hope that, if not for us, at least for our children, life will be better," she said, scoffing at Moscow for suggesting native Russian speakers like herself faced danger and discrimination from "Banderites" — far-right admirers of 1940s anti-Soviet partisan Stepan Bandera.

"I am not a radical like those men on the Maidan," she said, sitting coiffed and businesslike at her desk. "But if wanting a better life makes you a Banderite, then I am a Banderite."

Having grown up with the empty shops of the Soviet 1980s, she no longer believed promises of prosperity from Moscow and — much as she saw Russians as family — she saw them behaving as if they now thought, like Nazi Germans, they were a "master race."

"If you love someone, you hug them like this," she said with a gesture. "You do not grab them round the throat."

Across the square, 22-year-old Lenara Smedlyayeva has special cause to fret about Crimea being lost to Russia. Born into the Tatar community there, she now works at the "Crimea" restaurant on the Maidan and fears not just losing ties to family but that Tatars, persecuted under Soviet rule, could face new hardships.

"Putin is a swindler," she said of Sunday's referendum that Tatars are boycotting. "Once again, Crimean Tatars will suffer."

Next door, gnawing national anxiety about the future is keeping Andrei Karachevsky and Galina Osadko busy. They are among psychiatrists working in a closed branch of the McDonald's fast-food chain that was turned into a drop-in counseling center early in the protests. "How are we going to live now?" is the most typical question patients pose, Karachevsky said.

Strikingly, said Osadko, the trauma of witnessing death and violence during the protests had prompted relatively few to seek psychiatric help. A sense of purpose among protesters gave them strength to withstand emotional shocks. Whatever their worries, even suicide rates seemed to have fallen among the most active.

Instead, she said, calls were coming in from people sitting at home — especially among an older generation, brought up on Soviet certainties and "not used to making their own decisions."

They were also more likely to fall prey to speculation about war. "Those who watch television," she said, "are having more psychological problems than those who fought on the Maidan."

Said her colleague Karachevsky: "The biggest problem Ukrainians are facing is the uncertainty and what comes next."

Across town at the war memorial, Oksana, in her 40s from Kiev, had brought her daughter. "It is important she sees our history," Oksana said, looking over lines of tanks not too different from those now filling television screens. "We thought we had put war into the museum. I only hope we can keep it that way."