During the Sochi Olympics, President Vladimir Putin was basking in pride and glory. Although it took a record-breaking $50 billion to do it, Putin pulled off a successful Winter Games. The world came, the world watched, and in the end, the world praised Russia for doing an excellent job as host. Putin savored the moment: Russia had finally returned to center stage, even if it was for only three weeks.

But this Olympic glory was clearly not enough for him. Something was still very much lacking in terms of Russia's place in the global arena. Although the ousting of his ally, Ukrainian President Viktor Yanukovych, on Feb. 22 was a crushing defeat for Putin, it nevertheless gave him a golden opportunity to fulfill his imperial ambitions — at least in part.

Putin, who always admired the conquests of Peter and Catherine the Great — and even George W. Bush — has finally received the golden opportunity to fulfill his own imperial ambitions by conquering Crimea — and perhaps more.

Putin always admired the imperial achievements of Peter the Great, who defeated the Swedish Empire and redefined Russia as a new global power in the early 18th century. Putin also admired Catherine the Great, who defeated the Ottomans and was the first Russian leader to annex most of the Crimean peninsula in 1783. In terms of leaving a legacy for himself, Putin will soon be able to say he repeated Catherine's great conquest. Impressive.

The other leader Putin admires, surprisingly enough, is U.S. President George W. Bush — a ­modern-day "imperialist" in his own right. Despite all of Putin's outspoken criticisms of Bush's unilateralism and expansionist foreign policy, Putin was always a Bush wannabe. Deep down, he marvelled at Bush's strength and defiance in defending what he believed to be his country's national interests.

Although he would never admit it, Putin probably even admired Bush's invasion of Iraq in 2003. In Putin's mind, the invasion highlights all of the "privileges" of being a modern superpower: dictating terms and conditions to other countries, flaunting your double standards, expanding your country's influence on the global arena, and breaking United Nations resolutions by invading other nations at will — and getting away with it. This is what superpowers do.

Thus, Putin's seizure and certain annexation of Crimea allows Putin to be Bush, Peter and Catherine the Great all in one, even if it is on a much smaller scale.

For those who doubt that the Kremlin's annexation of Crimea is a premeditated, carefully orchestrated special operation, they need look no further than a bill that is currently being raced through the State Duma. The legislation, which was introduced the day before the Federation Council approved the use of military force in Crimea on March 1, would ease the procedure for annexing new territories.

Unlike the preposterous official explanation that it was not the Russian Army but "local pro-Russian self-defense forces" that had seized the Crimea, the sponsors of the annexation bill were completely upfront, saying the legislation is directly linked to Crimea. At least they deserve credit for being honest on this point.

The real question, however, is whether Putin will stop with Crimea. The Russians have a saying: "­Appetite comes with eating." As soon as Putin starts devouring a chunk of Ukraine and really savoring it, the more Ukrainian territory he will want. 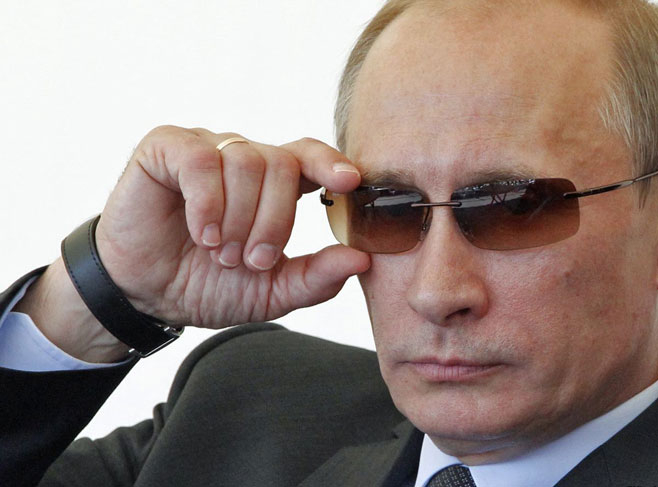 As a harbinger to this expansion, pro-­Kremlin Sergei Aksyonov, who seized power on Feb. 27 and declared himself Crimea's new prime minister, went on television Sunday to address residents in Ukraine's southern and eastern regions, which have Russian-speaking majorities. Aksyonov urged them to hold their own referendums on secession and offered to send Crimean "self-defense forces" to help protect them.

Given the glorious and patriotic fashion in which state-controlled television has justified Russia's military intervention, it is no surprise that the majority of Russians are cheering Putin as a national hero for his show of strength in Crimea. ­According to a late-February Levada poll, Putin's popularity rating jumped to 69 percent since the crisis in Crimea started, the highest since May 2012.

The imperial euphoria over annexing Crimea will probably last for a month or two. But after that, Russians will feel the high cost of U.S. and European sanctions, a continued drop in the ruble, ­increase in prices for food and other imported goods and capital flight. At some point, ordinary Russians who are far removed from Crimea will ask themselves whether Putin's imperial ambitions are really worth the economic cost, estimated at $5 billion a year.

The Kremlin has claimed that its motive behind the military intervention is to protect Russians in Crimea, but sooner or later Russians in Kemerovo, Kirov, Kaluga and dozens of other depressed Russian regions will say to Putin: "When will you protect Russians here at home — against corruption, lawlessness, crime and poverty? Perhaps you should instead send Russian troops to our regions to protect us against local organized crime groups and bureaucrats who act with impunity — and invest $5 billion every year in our dilapidated infrastructure."

Meanwhile, if the West applies tough sanctions against Putin's inner circle, targeting their ­assets held abroad, Putin's political elite will ask a different and more dangerous question: "If our ­multimillion-dollar assets that we worked so hard to accumulate as government officials are being frozen because of Putin's reckless imperial ambitions, why should we support him anymore?"

And this is Putin's real Achilles' heel. Just as ­Yanukovych's demise was accelerated when he lost the support of his inner circle and oligarchs, the same could also happen to Putin. Although Putin sees himself as a much stronger leader than Yanukovych and likely dismisses the danger that his inner circle would ever turn on him, he may be fooling himself. It all depends on how painful and effective the Western sanctions against Putin's elite end up being.

On Sunday, Crimean residents will vote in a ­bogus referendum that was hastily arranged by pro-Russian occupation forces in less than two weeks. The vote, which many Crimean Tatars plan to boycott and most Western countries consider illegitimate, ­offers two choices: remain as a part of Ukraine or join Russia. In a distorted local propaganda campaign, the referendum is often presented to Crimeans as a choice between securing peace, prosperity and security as a Russian protectorate, or being subject to discrimination and violence under a "fascist Ukraine."

Given Putin's imperial ambitions and his determination to undermine the popular revolution in Kiev, it is clear that Russia's annexation of Crimea is a foregone conclusion. It matters little to Putin that many Crimeans — particularly, Ukrainians and Tatars living there— do not want to be a vassal of Moscow again. But what Putin wants, Putin gets. After all, he adheres to Stalin's famous principle: "It is not important how the people vote; what is important is who is counting the vote."

Putin and Stalin share another important thing in common. In 1940, Stalin was also infamous for annexing foreign territories — Latvia, Lithuania and Estonia. What's more, before the annexation was executed, Stalin, too, held referendums in these three Baltic states, and the residents voted overwhelmingly to join the Soviet Union. At least, that is what the Kremlin claimed.