Although Michael McFaul masterminded the "reset" between the U.S. and Russia, ushering in a welcome period of warmer relations, ­albeit short-lived, his ambassadorship to Moscow was doomed from the start.

McFaul used his charm and "Twitter diplomacy" to win over tens of thousands of Russians. This led the Kremlin to carry out a smear and harassment campaign against him.

The sandy-haired Montana native fell right into the Kremlin's anti-American propaganda trap during his first days on the job, and he never managed to pull himself out. Last week, McFaul announced that he was leaving after only two years in Russia to return to his old professorship at Stanford University.

McFaul arrived in Moscow only a month after the December 2011 protests that attracted tens of thousands of people in the largest anti-government demonstrations since August 1991.

For the Kremlin, the timing couldn't have been better. Instead of a standard, reserved career diplomat, McFaul was a public figure whose critical views on Russia's democracy and human rights were well-known, given his track record as an ­author, television commentator and chief adviser on Russia to U.S. President Barack Obama.

Immediately, the Kremlin labeled McFaul's pro-democracy positions as identical to those of Russia's "radical opposition," which was to say "subversive." Notably, one of the main slogans at a large pro-Kremlin rally in Moscow on Feb. 4, 2012, two weeks after McFaul's arrival, was "No to the Orange plague! No to the U.S. Embassy!"

State television seized on McFaul's well-­received 2002 book "Russia's Unfinished Revolution: Political Change from Gorbachev to ­Putin," claiming that the words "Russia's unfinished revolution" provided clear evidence of McFaul's subversive plans to overthrow the government of President Vladimir Putin. At first, the ridiculous distortion prompted laughter in the West. Then, it evoked indignation when the Kremlin crudely attempted to turn a respected scholar and Russia expert into a modern-day Che Guevara.

Throughout McFaul's two years as ambassador, the Kremlin never stopped spinning the primitive myth that the U.S. sent McFaul to Russia to fund the opposition movement, turn street protests into ­million-man marches, and carry out an Orange-style revolution in the country.

Admittedly, McFaul made himself an easy target at times. He invited opposition leaders and human rights activists to a meeting on his second day on the job, on Jan. 17, 2012. The Kremlin spin machine went into overdrive, with state television reporting about the meeting in menacing tones. NTV, for example, ran a special program "Receiving ­Instructions From the U.S. Embassy," in which journalists badgered opposition leaders on their way into and from the meeting with McFaul with questions like "Why did you come here? What is your mission?" The Kremlin conveniently ignored the fact that McFaul had met with senior government officials the day before, or that dual-track diplomacy — meeting with both government officials and the opposition — has been considered standard diplomatic practice all over the world for decades, including by Russian ambassadors in Washington.

McFaul also annoyed the Kremlin when, during a May 2012 speech to the Higher School of ­Economics, he said that Russia had bribed Kyrgyzstan to kick U.S. forces out of the air base in Manas.

Nonetheless, it would be hard to find a better friend of Russia. As special assistant to Obama on Russian affairs from 2009 to 2012, McFaul was the architect of the effort to reset relations after they hit post-Cold War lows under the presidency of George W. Bush. One of the foundations of the reset policy was to de-emphasize "democracy promotion," a discredited hallmark of the Bush era that had particularly irritated Moscow. The strategy behind reset was to create a bilateral agenda based on ­realpolitik — emphasizing issues such as improving economic ties and investment, helping Russia gain admittance in the World Trade Organization in 2012, reducing nuclear arms and working together to fight global terrorism.

The reset scored some successes during President Dmitry Medvedev's term from 2008 to 2012. But Putin's return to the Kremlin in 2012, coinciding with McFaul's arrival to Russia, put an end to whatever reset there was. 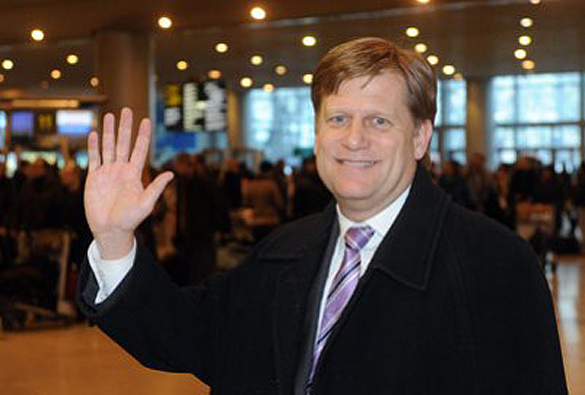 One of the Kremlin's main problems with McFaul was that, unlike previous U.S. ambassadors, he greatly expanded direct contact with ordinary Russians. During his first week on the job, he released a YouTube video addressed to the Russian people. He came across as a sincere and likeable all-American boy who grew up in Montana — "which is like Russia's regions," he said in the video — who first fell in love with Russia as a university student, and who devoted his entire career to studying the country. At the end of the video, McFaul invited all viewers to communicate with him on Twitter. By the end of his first year, he had more than 50,000 followers on his account, successfully implementing what became known as "Twitter diplomacy."

Therein lay the problem for the Kremlin. If McFaul had stayed in Russia for another three years — until the end of Obama's second term — his popularity could have grown even more. This would have given away the lie that he was supposed to be an insidious U.S. spy with a revolutionary mission.

Therefore, the Kremlin, using its state-­controlled television stations, ratcheted up its smear campaign and harassment against McFaul. At the same time, Putin signed the "foreign agent" law in July 2012 that limited the activities of nongovernment organizations, which the Kremlin had suggested were paid agents of the U.S. Embassy. Several months later and seemingly under a similar pretext, Russia kicked out USAID, the U.S. federal agency that provided grants to Russian NGOs. 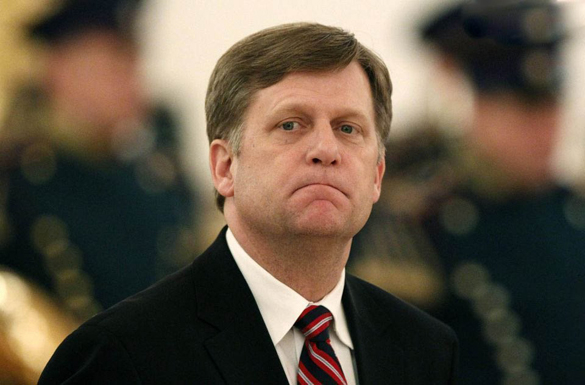 In the end, McFaul's popularity and successful outreach efforts to ordinary Russians were no match for the Kremlin's massive propaganda machine. This battle was probably more a factor than the "family considerations" that McFaul cited behind his decision to leave, a move that the Russian government apparently had been seeking for the past year.

Notably, the day McFaul announced his departure, the Foreign Ministry wrote a snarky remark on its Twitter account: "Прощайте, Михаил!" ("Farewell, Mikhail!") Considering the tense ­relations between the two, this could easily be ­interpreted as "Good riddance!" And by referring to McFaul as "Mikhail" for the first time instead of "Michael," it seemed as if the Foreign Ministry, out of spite, was getting its last licks in, trying to deny the ambassador of the all-American image that has made him so likeable to many Russians.

In a farewell interview with Kommersant, McFaul said one of his greatest failures as ambassador was his inability to destroy the myth that the U.S. wants to organize a revolution in Russia. But it wasn't his failure at all. It was the failure of the Kremlin to play fair with McFaul ­­­— and to be honest with its own citizens.

Viktor Medvedchuk, for a long time a leading pro-Russia figure in Ukrainian politics, had until now been lying low since he turned up in Russia last year...