The construction in Sochi for the upcoming Winter Olympics has been hampered by incompetence, inefficiency and corruption, and the preparations for the 2018 FIFA World Cup are headed for the same problems, said an architect who is working on both projects.

Dmitry Bush is a partner at the Arena Project Institute, a niche architectural firm that is currently working on the design of the central Olympic stadium and the ice palace for figure- and speed-skating in Sochi. His firm has also been contracted to design three soccer stadiums for the 2016 FIFA World Cup.

"Today, it is practically impossible to organize the design of a unique, large-span, complex object through government structures," Bush said in an interview, explaining how he came to create his own firm.

Arena was founded a little more than a year ago when Bush left Mosproekt Institute, a government construction firm where he worked as deputy director and led a design workshop. While working at Mosproekt, Bush worked on projects like the Lokomotiv soccer stadium in Moscow and the skating rink for the 2000 World Hockey Championship in St. Petersburg. But he found the complex legal framework of the state-owned corporation to be a hindrance.

"For every project at Mosproekt worth more than 100,000 rubles, a tender must be held … the one who wins the tender is the one with the lowest price," Bush said. "As we work with unique structures, big stadiums for 40,000 people, there are really only four or five firms in Moscow capable of carrying out these projects, but the tender goes to whatever provincial firm offers the lowest price — this way of organizing projects does not work." 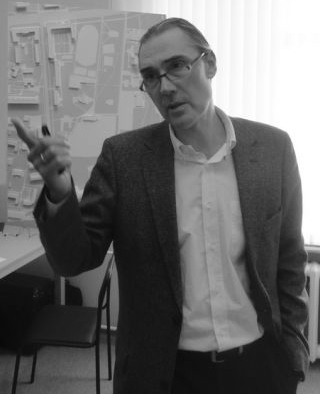 Since creating the new firm, Bush has continued working on the two Sochi stadiums that he began while at Mosproekt, while the new company has independently gained contracts to design stadiums for FIFA 2018, among other projects.

Asked what advice he had for foreign companies hoping to break into the Russian construction and design markets, Bush was quick to emphasize the differences between architectural firms and construction firms, noting that he had worked with several foreign architectural firms, whose biggest challenge had simply been adapting to the Russian style of relationships with colleagues and clients.

However, Bush said it was practically impossible for construction firms to break into the Russian market, because "a foreign general contractor cannot win a Russian tender."  General contractors win tenders by the costs they propose and the period of time in which they can complete the project. "But, a tender is generally set up so that, in addition to these two factors, there are also personal connections between those who participate in the tender and those that lead it — but I cannot say any more on that theme — so foreign firms are practically excluded," Bush added.

Apart from the difficulties faced by foreign firms, Bush said companies like his were faced with significant problems due to the ignorance of the ordering customer, who rarely has the expertise to understand the specifics of building a complex facility like a stadium.

Bush emphasized that this was particularly true when working with government agencies, saying "these structures rarely have professionals who understand exactly what a football stadium entails. They have overseen schools, hospitals, houses, but they have never worked on a stadium … and by the time they figure out what it entails, the work is already ending."

This was particularly true in Sochi, where state corporation Olimpstroi repeatedly changed the specifications of the main stadium, first requesting an open stadium and then demanding the addition of a roof for the opening ceremony. "All of the projects we have built to completion wound up looking completely different than was first planned," Bush said.

In addition to the general vagueness of planning on the part of Olimpstroi, Bush said the weak infrastructure of the city of Sochi itself further delayed construction and raised costs, necessitating the creation of roads and electricity networks. In Sochi, "there weren't any roads, there were always traffic jams, there was not enough electricity, there weren't docks for cargo ships, there was not an adequate airport or train station," Bush said, adding that if the work had been done in a city with developed infrastructure "it would be half as expensive."

Bush's company is already commencing work on three stadiums for the upcoming 2016 FIFA World Cup. The government intends to host the games in cities that lack developed infrastructure, Bush said. "The problems will be the same" as those in Sochi.

While he forecast similarly inflated prices and construction times, Bush said that once construction was completed, the future host cities would — like Sochi — have updated infrastructure, and perhaps the benefit would be worth the cost.