Thousands amassed on Sunday for a rally against President Viktor Yanukovych just days before he heads for a meeting at the Kremlin, which the opposition fears will slam the door on integration with the European Union.

Minutes before the rally, EU enlargement chief Stefan Fuele said on Twitter that he had told Ukraine last week he was suspending work on a trade-and-political agreement, saying Kiev’s arguments to improve terms had “no grounds in reality.”

The U.S. Senator attends an anti-government protest in the city center as an EU official expresses little hope of signing a new deal.

Fuele’s words suggested the EU has lost patience with Kiev’s demands for financial aid and was irritated at the way the bloc was being forced to take part in a ‘bidding war’ with Russia over Ukraine.

Street protests erupted after Yanukovych’s decision on Nov. 21 to walk away from the agreement with the EU, after years of careful preparation, and turn to Moscow for aid to save Ukraine’s distressed economy.

Yanukovych’s policy swerve, while backed by many in his power base in Russian-speaking east Ukraine, sparked huge disappointment and anger in western and central areas where people see Europe as their proper place.

The weeks-long standoff between demonstrators in central Kiev and the authorities took on increasing geopolitical overtones with the arrival of U.S. Senator John McCain. 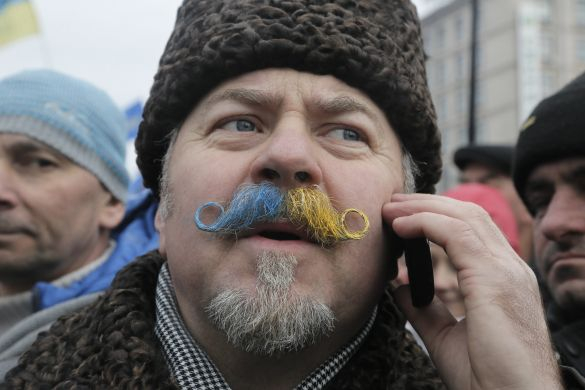 A protesters’s mustache is painted in the colors of Ukraine’s national flag.

The movement began as a low-level pro-EU protest. But after a police crackdown on a group comprised mostly of students and a face-off between police and protesters last Wednesday, it has broadened into a general outpouring of anger against perceived sleaze and corruption in the country that Yanukovych has led for four years.

McCain is the latest of a string of European and American dignitaries to tour the sprawling protest camp set up behind barricades of benches, metal barriers, supermarket trollies and wire netting on the square — known locally as the “Maidan.”

McCain galvanised the 200,000 or so people on Kiev’s Independence Square on Sunday, telling them that the country’s destiny lay in Europe.

Though Yanukovych has offered up the heads of two minor officials, he has shown no sign of meeting the opposition’s main request for the dismissal of his prime minister, Mykola Azarov.

Yanukovych on Saturday dismissed the head of Kiev’s state administration and a national security aide over the violence on Nov. 30. Ukrainian Prosecutor General Viktor Pshonka said two more police officials involved that night were under investigation.

Klitschko’s Udar party called Sunday for the dismissal of Andriy Kluyev, one of Yanukovych’s closest security aides, whom the opposition says was behind past attempts to break up the protests by force. 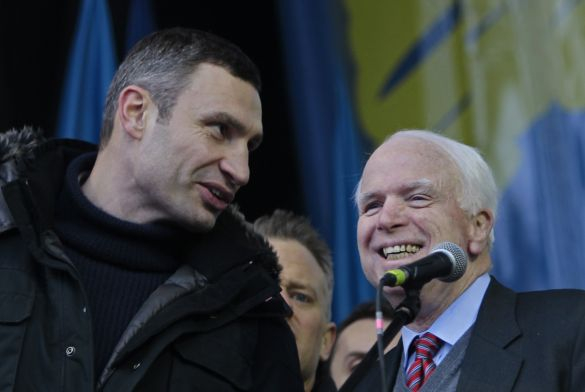 Yanukovych himself is scheduled to travel to Moscow to meet President Vladimir Putin and tie up agreements to help Ukraine’s creaking economy, possibly by securing cheaper prices for gas and credits.

The opposition fears, however, that Yanukovych may be taking the first steps towards joining a Moscow-led Customs Union, together with Belarus and Kazakhstan — which they see as an attempt by Putin to recreate the Soviet Union.

“He might as well stay in Moscow and not come back to Kiev if a customs union agreement is signed,” declared Yatsenyuk. “We will give him a really warm welcome if he sells out Ukraine.”

Opposition leaders called for another mass rally on Tuesday to monitor Yanukovych’s trip to Moscow and any deals made there.

On Sunday, the crowds gathered on Independence Square were smaller than a week before but no less determined. Thousands shuffled onto the square, squeezing their way through a tight human channel of security committee officials checking for possible “provocateurs.”

“I heard [McCain] was here. It is nice that they know of us, that they remember us. It is great that they support us,” said Volodimir Tarabanov, 28, who works for a delivery company in Kiev.

Apart from those on the Maidan, thousands of Yanukovych supporters staged a rival rally in Kiev on Saturday, many bussed in from Donetsk and other cities in eastern Ukraine.

“We are here because an effort to destabilize the country has begun. I voted for the president, I am here to back him,” said Nikolai, 61, who works in the southern Ukrainian port of Kherson.