Moscow's brightest stars in business and culture were honored at the first annual Moscow Times Awards on Tuesday evening, in a ceremony held at the Metropol hotel.

An expert council composed of representatives of foreign chambers of commerce and international journalists from leading organizations including The Financial Times, Voice of America, Time Magazine and The Moscow Times selected winners in 12 categories, recognizing their contributions to improving life in Russia's bustling capital.

The master of ceremonies, Vladimir Pozner, the trilingual journalist remembered in the West as the "face" of the Soviet Union, was greeted warmly by the nominees and their guests.

"I am a little nervous about hosting it, but hopefully it will go well," he said prior to the event.

Pozner's jitters proved to be unwarranted. The lavish dining room of the Metropol hotel, decorated with intricate glass structures and colored lights, imbued the venue with the city's warm holiday spirit. In an effort to highlight Moscow's evolution, the event opened with a video remake of the 1990 hit by the Scorpions "Wind of Change," which featured The Moscow Times' staff.

Even before the official ceremony got under way, many of the 240 guests who had gathered were commenting on the unique and welcome theme of the event. The mood was one of appreciation for the foreign and business communities' recognition and validation of progress in the capital.

Attendees were reminded of how vibrant the cultural life of the city has become thanks to various narrated vignettes and brief presentations of the stories behind the nominations. A special mention of thanks was made to infrastructure billionaire Andrei Filatov for sponsoring the startup of the first television channel dedicated exclusively to chess.

As the evening drew to a close, dapperly dressed Pozner conceded that the awards ceremony was a success. Countering an old Russian maxim that explains why initial efforts do not always work out, Pozner said, "I guess the first blin came out quite well."

Irina Antonova, the legendary director of the Pushkin Museum of Fine Arts, was voted Person of the Year by readers of The Moscow Times. For  five decades, the diminutive nonagenarian has run one of the city's prime attractions, and her accomplishments include setting up a Pablo Picasso exhibition in 1956, becoming the first Soviet museum to display the master.

"Our museum has many plans for the future," said the dynamic 91-year-old. "We have acquired a new building and we are always working on new exhibitions. We now even have a new art therapy program. Things are always changing."

Recent exhibitions at the Pushkin Museum of Fine Arts include Salvador Dali, Caravaggio, Titian and the Pre-Raphaelite painters.

The readers' choice for the winner of the most coveted prize came as a surprise to the ceremony organizers, said Moscow Times publisher Ekaterina Movsumova.

The Person of the Year in Culture award went to theater and film director Kirill Serebrennikov. Although met with strong opposition from the troupe, Serebrennikov transformed the old Gogol Theater into the hip Gogol Center, a popular destination among the capital's youth. 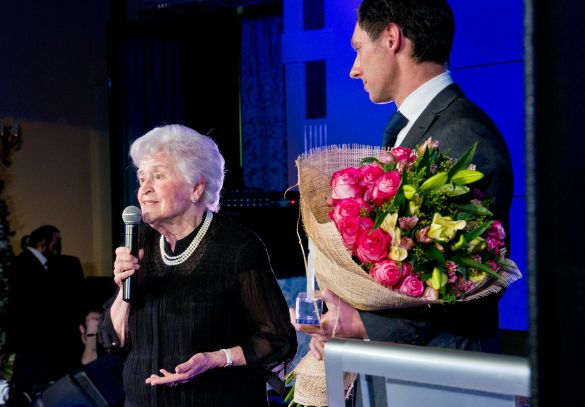 Pushkin Museum director Antonova being awarded Person of the Year.

The Best City Improvement award was accepted by Sergei Velmyaikin, deputy labor and social protection minister and one of the authors of the anti-smoking law.

In his acceptance speech, Velmyaikin said he was pleased to be involved in helping to increase the life span of Russians and that even stricter rules about smoking in public places will come into effect this summer.

"Our objective is to safeguard the rights of nonsmokers," Velmyaikin said. "They have the right to breathe fresh air and be healthy."

The Foreign Direct Investment award went to France's Renault and was accepted on behalf of the auto giant by Igor Titov, the company's vice president for public affairs for Eurasia. Renault's investments in Russia totaled $1.8 billion, and almost one-third of that amount was channeled into Renault's Moscow factory, Avtoframos.

Other nominees included German machinery producer Siemens, and French investment in Auchan and Atak supermarkets, as well as in Leroy Merlin stores for the home.

Country of the Year

The Netherlands beat Britain and France to win the Country Partner of the Year award. Over the course of 2013, the Dutch held a series of cultural and business-oriented events in Russia's capital, including the Dutch Days in Moscow and a unique performance by the Kyteman Orchestra and the Don Cossack Choir in Gorky Park. The Netherlands is also one of Russia's biggest trading partners.

The Gaidar Forum was chosen as the winner in the Best Business Event award category. Vladimir Mau, rector of the Russian Presidential Academy of National Economy and Public Administration, said in his acceptance comments that the Gaidar Forum would pursue its efforts to make Moscow an attractive destination for capital and investment.

Held for the first time in 2010 in commemoration of Yegor Gaidar, one of the authors of Russia's economic reforms of the 1990s, has become a key political and economic event in Moscow. Prime Minister Dmitry Medvedev, Finance Minister Anton Silyanov, Sberbank chair German Gref, and the director-general of the World Trade Organization, Pascal Lamy, are among its notable speakers.

It was a close race in this category, as the runners up were the CIB Russia Forum 2013 and the Moscow Urban Forum. 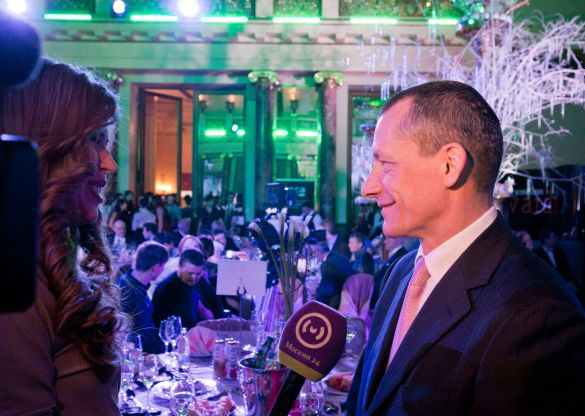 Former Deputy Mayor Andrei Sharonov speaking to the press at the event.

The 107-year-old Metropol, a 363-room luxury hotel, is located across from the Bolshoi Theater. The hotel has hosted a broad spectrum of colorful guests from around the globe, including George Bernard Shaw, Sergei Prokofiev, Mao Zedong, John Steinbeck and Marlene Dietrich.

MasterCard was named best Corporate Citizen, with Mikhail Fedoseyev, vice president of MasterCard Russia, taking to the stage to receive the award, which had the words "The Moscow Times" in crystal, on an engraved pedestal. At the beginning of the year, MasterCard launched a campaign to fight cancer. With every purchase made with the card, 10 kopeks were donated to a charity fund. The campaign has garnered 34 million rubles ($1 million).

Other nominees included charity and ecological projects organized by 3M and Nestle.

The Golden Mask theater festival, held on stage of the Stanislavsky and Nemirovich-Danchenko Music Theater in April, was chosen as the Best Cultural Event of The Year.

Golden Mask director Maria Revyakina was taken by surprise by the honor, having spent part of the evening convincing her friend and fellow cultural giant, Joseph Backstein of the Moscow Biennale of Contemporary Art, that he should be preparing an acceptance speech, as she believed he would be declared the winner.

Russia's main theater festival this year ran the premieres program from the Mariinsky Theater. It featured Valery Gergiev who conducted the operas "Pelleas et Melisande" and "The Tales of Hoffman," as well as the "Midsummer Night's Dream" ballet.

Backstein's biennale and the Seventh Exhibition of Nominees for the Kandinsky Prize were also short listed nominees in this category.

Humanitarian of the Year

The Humanitarian of the year award went to Dr. Yelizaveta Glinka, founder of the Just Aid Foundation. Every Wednesday, "Dr. Liza's" volunteers head to Moscow's Paveletsky Station to distribute food, clothing and medicine to the homeless.

Olga Zakharova, director of Gorky Central Park of Culture and Recreation, received the award for the Best Cultural and Leisure Center, in competition against the Pushkin Museum of Fine Arts, and the Documentary Film Center.

Gorky Park, made famous abroad in a 1981 novel of the same name by Martin Cruz Smith, has undergone a transformation in recent years and is now seen by many Muscovites, especially younger ones, as a hip place to spend time.

"The park is my child, and I have taken great pleasure in seeing it take its first steps," Zakharova said in her acceptance speech.

The Best Business Center of the Year award was accepted on behalf of the White Square Office Center by Dmitry Minz, board chairman of O1 Properties. Located near Belorusskaya Station, the complex has transformed the face of its neighborhood. Other short listed nominees included the Danilovskaya Manufactory 1867 and Moscow City.

See more photos of the event at the photo gallery.