Over the next five years, the investment arm of the state-owned bank, Sberbank CIB, will provide 70 percent, or about 55 billion rubles of Crocus Group's investment program, which will be funneled into the sprawling Crocus City complex, an area just beyond the MKAD to the northwest of Moscow.

The rest of the sum is to come from Crocus Group's own funds.

The bulk of the investment will be split between the Vegas III shopping mall, a 51-story office center, a high-class residential compound and two hotels.

By 2017 Crocus City will boast, aside from exhibit, retail and office space, a top-end Marriott hotel and the world's largest Holiday Inn, stocked with more than 1,000 rooms.

"The usual procedure for banks' clients is to start building after the loan agreement has been signed, but we have already been fueling the projects with our own funds and began building before any borrowed money came in, as is our usual practice," Aras Agalarov, the president of Crocus Group told the press. Construction on many of the sites is already in full swing.

Crocus plans to pay out over the period of about 20 years. The interest rate differs for various projects but is on average 10 percent, Agalarov said.

The company is confident that it will be able to service the loans as demand for hotel and retail space remains high. 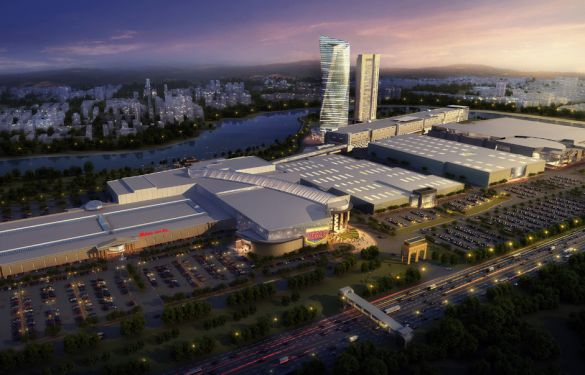 "The cost of a hotel room in Moscow is directly related to the business activity in Crocus City. Every time we have a conference, the prices go up and there are almost no vacancies," Agalarov said.

Crocus City's existing Aquarium hotel illustrates this, he said. Even though the view from half of its rooms is a "breathtaking" sweep of the interior of the exhibition center, when events are held, they are filled.

However, while optimistic about returns on the center's shopping and commercial space, retail experts doubt that demand will be strong enough to occupy two large hotels in the midscale and upscale segments.

"Clearly, they will be focused on volume, on occupancy, rather than on the average rate. But when there are no events on — in summer season, at weekends, in other low seasons — there will be little demand for these hotels," said David Jenkins, head of Jones Lang LaSalle Hotels & Hospitality Group.

But Agalarov was confident that even the 1,750 rooms Crocus will sport will not be enough. To position Crocus City as a world-class exhibit center, all of which are surrounded by hotels, at least 5,000 rooms are needed, he said.

Besides, operators for the hotels have already been chosen and contracts have been signed, Agalarov added.

A French broadcaster said Putin had told Macron he would rather “play ice hockey” than decide on whether to meet Joe Biden to avert war.
chaotic shelling