As more than a month full of exhibitions draws to a close, The Moscow Times looks back at some of the most interesting parts of the 5th Moscow Biennale of Contemporary Art.

Apart form the main exhibition "More Light," the Biennale included a large parallel program and special projects in galleries and spaces that created a constellation of art events throughout the capital. Check out which exhibitions are still open for a little while longer and read festival commissioner Joseph Backstein's look back at the Biennale here.

Held at the Moscow Planetarium, this group exhibition that was shown in conjunction with the Russia-Netherlands cultural year explored contemporary notions of dialogue and exchange in open communication systems. (Vladimir Filonov / MT)

Together and Apart: The Urban Family in Russia in the 20th Century.

The Shchusev State Museum of Architecture played host to a group exhibition that approached the history and architecture of Russia in the 20th Century through urban and domestic life, recreating scenes and tableaux of the mundane and everyday that reflected the organization of society and on a more individual level, the personal lives of those who lived through the period. (D. Garrison Golubock / MT)

The exhibition of works from the Pomeranz collection at the Jewish Museum and the Tolerance Center included pieces by Dahn Vo, Rikrit Tiravanija, Francis Alys, Joseph Beuys and Martin Kippenberger, among others. As its title suggests, the show focuses on otherness and and openness, with the works aiming to show alternating viewpoints of the world and the differences in contemporary understandings of history between the East and West.

In the photo, curator Ami Barak is pictured in front of a piece by Marina Abramovic and her former lover Ulay. (D. Garrison Golubock / MT)

The Department of Labor and Employment

The extensive group show looked at the intersections and diversions between the production of art and the ideology of labor from the Soviet period to the contemporary. For a full review of the show, please see TMT's report. The exhibition continues at the State Tretyakov Gallery on Krymsky Val until March 30, 2014. (Vladimir Filonov / MT)

Miroslaw Balka, who once transformed the Tate Modern's Turbine Hall with the sculpture "How It Is," came to Moscow with a special Biennale project. "Fragment," his first solo show, continues with the themes of personal and historical memory that have made the artist famous and is on display at the Winzavod Center for Contemporary Art and National Center for Contempoary Art until Nov. 17. (D. Garrison Golubock / MT) 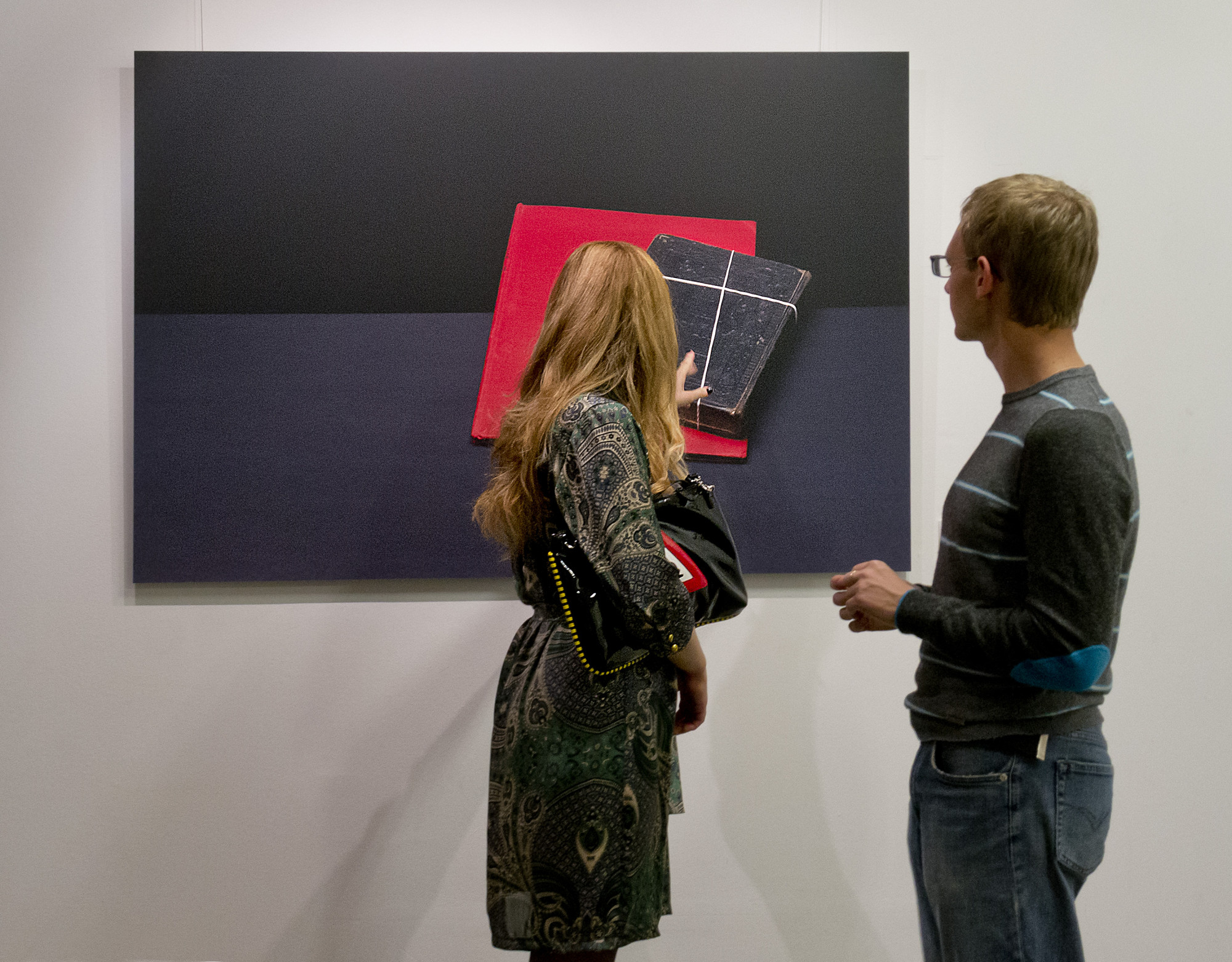 The ordinary and mundane were the subject of Vadim Gushchin's photography retrospective of over 80 works held at the Brothers Lumiere Centee for Photography. For the past 12 years, Gushchin has been photographing everyday objects like envelopes, bread and books and turned them into "monuments" by alienating them from their domestic contexts.

The results are poetic, still life-like compositions that is sure to leave one looking at things more closely. Read a full report on the show. (Vladimir Filonov / MT) 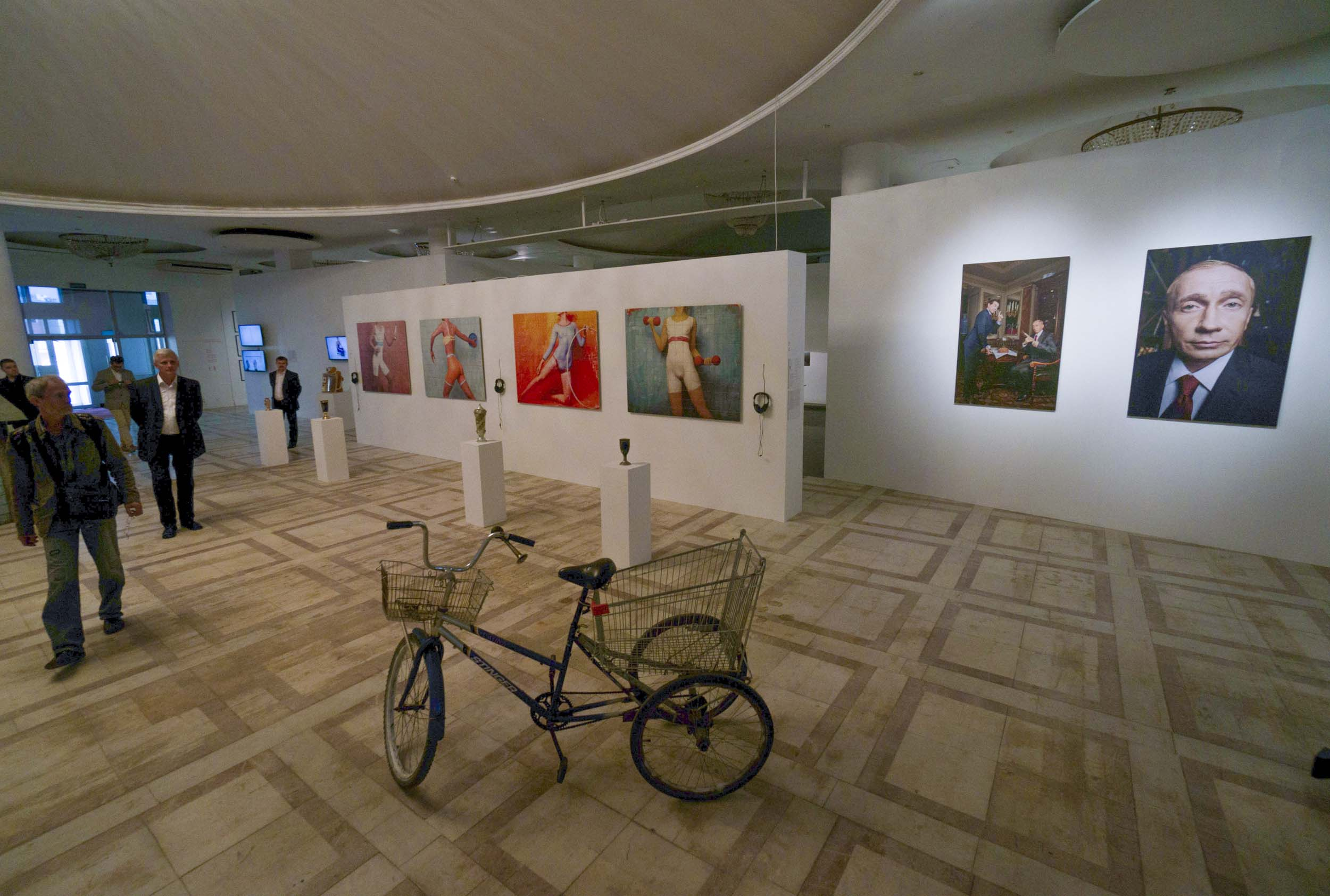 Viewers had the opportunity to see future of Russian art and uncover the next big thing from the 37 nominees for the Kandinsky Prize on display on the walls of the Udarnik Theatre. An eclectic combination of paintings, sounds installations, videos and sculptures were nominated for both the general and young artist's prizes. Read more about it here. (Vladimir Filonov / MT)

Over 100 artists from six continents were part of the Biennale's main exhibition that took place in the halls of the Manezh. One of the highlights of of which was Chinese artist Song Dong's "Waste Not," in which he displayed all the contents of his mother's home for all the visitors to see as a chronicle and tribute to her existence. (D. Garrison Golubock / MT)

The Austrian surrealist sculptor Erwin Wurm was exhibited in Moscow for the first time at Winzavod and created a truly  bizarre scene. Over 30 abstract works made out of rubber sausages were on display, resembling humanoid figures in a variety of poses. Also on display were sculptures made from old furniture, named after artists who had problems with alcohol. (Vladimir Filonov / MT)

Andrei Roiter is more well-known outside the country than in his native Russia, but the Amsterdam-based artist's work was brought to Moscow and is on show at the Moscow Museum of Modern Art.

His third show in Moscow, the exhibition brings together paints, installations, sculpture, photos and videos loosely organized around the theme of travel, and includes an immense sculpture of a human heart made from concrete and PVC pipe. The exhibition continues until Nov. 24. (D. Garrison Golubock / MT) 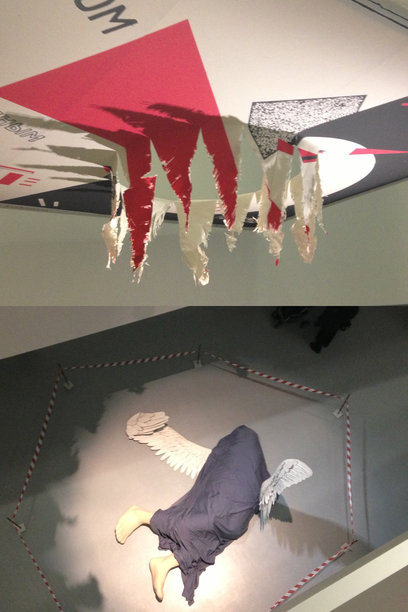 Shown in conjunction the Netherlands–Russia Year, the show creates a conversation between Lissitzky, one of the most famous figures of the early 20th century Russian avant-garde, and Kabakov, whose works were often a critique of the utopia promised by Lissitzky.

The show continues at Moscow's Multimedia Art Museum until Nov. 17. Read our article and explanation of the above photos here. (Christopher Brennan / MT)

The Arctic is warming roughly three times faster than the planet as a whole, the Climate Crisis Advisory Group said.