Moscow City Day, Sept. 7, is nearly upon us and so is the movie to mark it. Irish filmmaker Johnny O'Reilly's "Moscow Never Sleeps," when it's finished, will track the intertwined lives of several sets of fictional Muscovites from dawn through to the hours of darkness on Moscow's birthday, weaving narratives of mixed fortunes as the film's ordinary characters go about an extraordinary day in their lives.

The script reads like "Crash" but without the racism. In its stead, there's plenty of coverage of inherent classism, but it's played out subtly in the dialogue. The characters cut across the main Moscow socioeconomic divides: from the businessman who calmly faces economic exile, right down to the petty thieves, the stepchildren and the jettisoned pensioner. Each person's character development travels the spectrum of strength and weakness, morality and criminality, happiness, sadness — in short, the polarities of a great story.

The question stands of whether the script will undergo a successful transubstantiation into a success on the big screen. O'Reilly nodded affirmatively. "Moscow has become Europe's first Megapolis — it's a unique, exciting and thoroughly modern setting. What you don't fully get from the script is the potential visual impact of this great city."

O'Reilly isn't a novice: In 2010 he helmed The Weather Station, which performed well on the international festival circuit. The film was a thriller set in snowy wilderness in an anonymous and remote region of Russia. 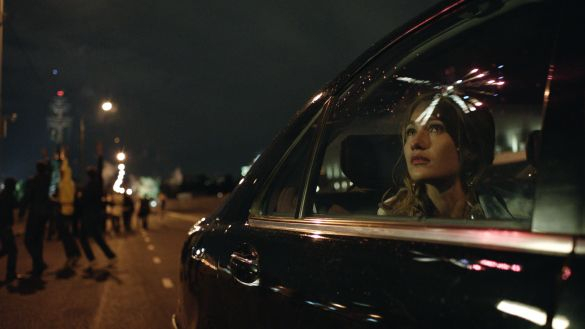 One character looking wisfully into the night in a clip from existing reel.

Conversely, "Moscow Never Sleeps," as the title suggests, is set in our bustling capital. Traveling through Moscow this September, you may very well bump into its producers, cameramen, sound crew and O'Reilly himself, all set on the film's success. It meshes so closely with reality that Soviet actor Yury Stoyanov will be playing himself, but on this occasion, in full dramatic, non-comic mode.

Others Russian actors with title billing include Rustam Akhmadeyev playing a thug, Yevgenia Brik as a singer and Alexei Serebryakov as the aforementioned businessman.

The title "Moscow Never Sleeps" was devised because, as is logical in Europe's biggest city — a city of twelve million people — there's always going to be hundreds of thousands of lyudi (people) awake at a given hour. The logic of the title also comes from the knowledge that "people are asleep to certain realities in their lives," according to O'Reilly.

"We take for granted the important things — love, family, peace of mind — and focus on our work lives, our social status. This film is about people being jolted out of their slumber and realizing the depth of humanity that surrounds us all," he said.

So far, approximately 25 percent of the film has been shot, and this week saw the schedule for filming the remainder begin. For post-production, the reels will be sent to Ireland's legendary Windmill Lane Pictures — the venue where U2 recorded their first eight albums.

O'Reilly himself, while Irish, has lived in Moscow for two decades, starting out as a student and a journalist. His company, called Snapshot Films, now has offices both in Ireland and Moscow. The capital and the people who reside within the country's borders have been an unrelenting source of inspiration for him. "Russians have a lot of soul. They also have a lot of history. There's a depth of humanity we don't have in the West. And it makes for great drama," he said.