Through much of history, both Persia and Russia existed in the western eye as exotic and faraway nations about which much was imagined and little was known. Iranian filmmaker, Komeil Soheili is coming to Moscow in the latest stage of a 'hitchhiker's pilgrimage' to present “Persia: Untold Stories,” a discussion of Iranian culture and people.

Soheili finds that even today, knowledge of Iran’s rich history and culture is opaque to outsiders, due to the political clashes that cut Iran off from the rest of the world.

A 28-year-old native of Mashhad, the second biggest city in Iran, Soheili has lived in Tehran for much of his life. His journalistic career began at the age of 16, when he handwrote arts stories for newspapers. Since then, he has worked as an arts and cinema journalist and documentary filmmaker with a focus on Iranian society.

Soheili took part in making more than 40 movies in Iran, despite the fact that filming can be restricted.

“It has its own difficulties,” he said. “But we made many movies.”

Less than a year after graduating from Tehran University with a master’s degree in Cultural Studies and Media in 2009, Soheili embarked on a formative six-month trip backpacking and hitchhiking around Iran, a country whose multiplicity of cultures and languages resembles Russia’s. It was the first extended journey he had taken around his country.

“I was really curious to know more about Iran. There are really different regions, different cultures and traditions. It inspired me a lot,” he said.

“I really surprised myself in some places. I couldn’t even talk the language sometimes!”

After the trip, Soheili had to complete his compulsory military service, after which he was granted a passport. The document prompted the journey outside of Iran's border that Soheili is still in the process of undertaking.

“I’ve hitchhiked from Tehran to St. Petersburg,” he said. “So far.”

He has been in Russia for just over two months now. In addition to presenting “Persia: Untold Stories,” he also shot footage for a documentary with the help of Russian friends, including an Iranian Studies graduate of St. Petersburg University named Alisa Shablovskaya.

In the course of his explorations of Iran, Soheili met over 100 travelers from around the world. He saw how negative and limited most of their perceptions were of Iran, at least initially, their only knowledge coming from the media’s coverage of Iran’s political strife.

“Politics are important, but it’s not a topic for everyone in society, it’s not a topic for me,” Soheili said. “I think it is a good thing for some people, not for others. I think that mostly people look at Iran only in a political way, but that is not the best way to know about a country. So I just decided to choose another window.” 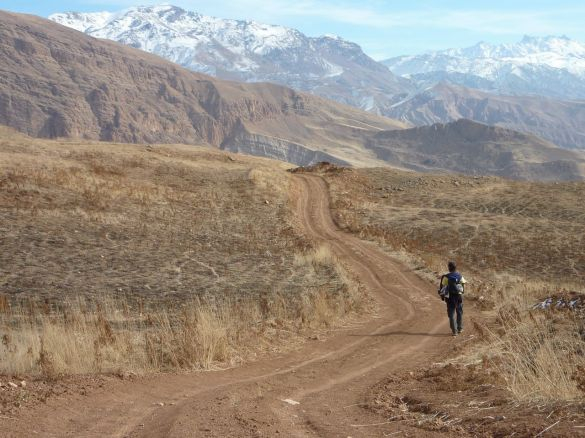 Soheili has been exploring the soul of his native country to make his films.

Using a PowerPoint presentation with Iranian film clips, music and pictures, Soheili began with a presentation in Armenia,followed by two in Rostov-on-Don and seven in St. Petersburg, shortly followed by two separate pairs of presentations atthe Tsiferblat apartment spaces on Pokrovka and Tverskaya.

While the first Moscow discussion took place Wednesday evening, a repeat performance on Pokrovka will happen Thursday, moving to Tverskaya on Friday and Saturday.

“I just decided to share my own experience about Iran, as a traveler, as a filmmaker, as a student,” he said. “Also [the experiences of] some of my friends.”

The more Soheili began to look at connections between Persia and Russia, the more he found.

“I found out that the first foreign ambassador who came to St. Petersburg was Persian, in 1711,” Soheili said. “There have been interesting relations between Iran and the city of St. Petersburg.”

Komeil even found a Persian cemetery in the city, a small part of the Muslim section of the Novo-Volkovskoye Cemetery, which houses the tomb of a young Persian woman killed in 1923, in what was then Petrograd, as well as a Persian prince, Shafi-Khan. He also learned that there was an active Persian rug trade in the city and that several Russian words originate in Persian, such as stakan (cup), shakhmaty (chess) and chemodan (suitcase).

A large part of Soheili’s presentation focuses on stereotypes, examining what they are and where they originate. Some Iranian stereotypes about Russia are typical — vodka and Russian girls — but some are political. 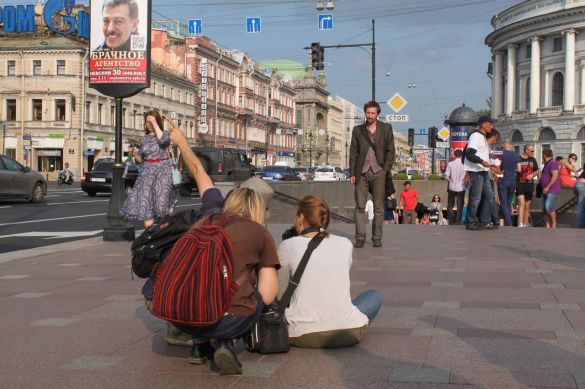 Soheili's assistants filming on the streets of St. Petersburg before he hitchhiked to Moscow for the discussions.

“We have some historical moments and some historical background with Russia that helped create these stereotypes,” Soheili said, pointing to the Iran-Iraq war in the 1980s, in which Russia supported Iraq with military equipment, including bombs which were dropped on Tehran; or historically, when the Russian military, enlisted by the Shah, executed Iranian Constitutionalists in the 1908 revolution.

While not shying away from uncomfortable points of history in order to examine the root of xenophobia on both sides, one of the most important points of Soheili’s project is sharing the stories of his friends, both native Iranians and foreigners living or traveling there.

On no two occasions does Soheili present the exact same lecture. “The presentations have changed during my travel. And I have this idea to change it each time and relate it to feedback and books I have found,” he said.

While in Russia's “northern capital,” Soheili teamed up with four friends he made at the University of Documentary Filmmaking to shoot a film about Russians who have converted to Islam, focusing on the challenges they face in negotiating society with a new identity.

“It is about Muslims, but mostly the focus is about tolerance. I focus on Muslims because I came from [a Muslim] country, I know about the rules; I have a background in it, maybe more so than Russians. That’s why I chose this community,” Soheili said. “We didn’t focus on why they converted, but we focused on how it was after they converted.”

It turned out that some members of the film crew themselves proved interesting subjects.

“Our film crew had a different idea about Muslims, so in this movie, I mostly follow their different points of view. Some of them were O.K. [with it], some of them couldn’t stand [Muslims] and had some problems with it. So this was for me a symbol of the whole society. I found out that there are many stereotypes about them, like anywhere.”

It was these stereotypes, according to Soheili, that caused most of the problems they observed, such as within Russian families. The grandmother of one young Russian woman who converted to Islam, for example, prohibited her from wearing a headscarf and practicing Ramadan.

A lack of clear understanding was consistent in the subjects that Soheili and his crew filmed, including in impromptu interviews conducted with people on the street.

“People confuse such terms as Muslim and refugee, or Tajik and Uzbek. They don’t understand that religion and nationality are different things,” Shablovskaya said.

They filmed in the Apraksin Dvor market in central St. Petersburg to show how the community of migrants and refugees really operates. They found a “secret mosque,” ate at a halal cafe and talked to Muslims there, who were generally open to speaking with the film crew despite mounting tensions against the migrant population in the city.

They also visited other, more-visible mosques in the city. However, they tried to approach their subject without an agenda. “We didn’t come to any clear conclusion that ‘We should be tolerant.’ We just told the story of the difficulties that people face,” Shablovskaya said.

Soheili found that his own stereotypes about Russia were altered in the course of his trip.

“For me, I was surprised by the hospitality. Before I came here stereotypes told me I shouldn’t expect too much hospitality. But I really felt welcomed here in many different places,” he said.