There was a real Monday morning feeling as the world athletics championships got underway to the now-familiar backdrop of a virtually deserted Luzhniki Stadium, though a knot of dedicated Ukraine fans did their best to lift the flat mood.

If Muscovites were not going to turn out to watch Usain Bolt on a warm Sunday evening, when the stadium was still only three-quarters full, then they certainly had no intention of rocking up on an overcast Monday morning for a thin qualifying session, despite the presence of some world-class talent.

"It's like night and day compared to London last year."

All the favorites advanced safely in both the 400 meter hurdles events, with a wide-open men's race headed by American Michael Tinsley and Puerto Rica's Javier Culson likely to be one of the highlights of Thursday night's program.

American former world champion Bershawn Jackson qualified for the semis but left the track with a heavily iced hamstring, shaking his head.

There was also disappointment for Jamaican former world junior champion Kaliese Spencer, who won her heat but was disqualified for taking her trail leg around, rather than over, one of the hurdles. 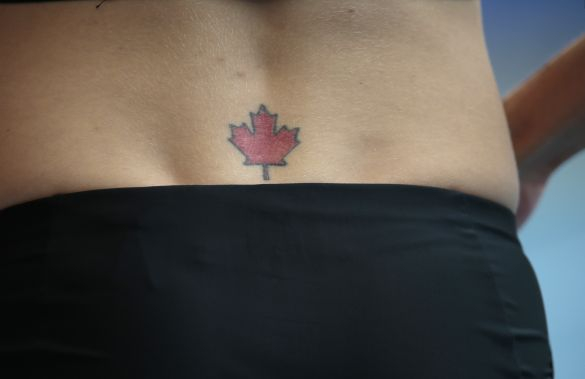 Heptathlete Eaton has a leaf tattoo.

However, she had to settle for second place going into the shot put behind Ukraine's Ganna Melnichenko.

Melnichenko, second-fastest in the hurdles, at last managed to raise some noisy support from the specially flown-in block of several hundred Ukraine fans clad in yellow and blue t-shirts, as she cleared a personal best 1.86 to lead on 2135 points. 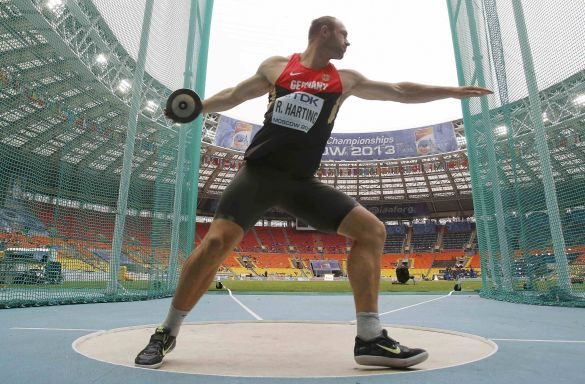 Robert Harting preparing to throw the discus during qualifying on Monday.

Germany's Robert Harting got his bid for a third successive title off to an impressive start when he launched the discus 66.62 meters with his first throw to march into Tuesday's final.

Pole Piotr Malachowski, who has been operating in Harting's shadow for the past four years and was memorably denied the world title by the German's personal-best last throw in 2009, also progressed safely with a 66.00 meter opener.

After Bolt won a men's 100-meter final containing an unprecedented four Jamaicans on Sunday, Olympic champion Shelly-Ann Fraser-Pryce was to lead the island's bid for the double in the women's event later on Monday.

Jamaica and the U.S. each had four women through to the semis, with Nigeria's Blessing Okagbare, who won a long jump silver on Sunday, hoping to crash the final party.

Missing the race was 2011 bronze medallist Kelly Ann Baptiste, and Trinidadian officials confirmed on Monday that she and fellow sprinter Semoy Hackett left Moscow due to doping-related matters "of varying degrees and complexity."

In the women's 400 meters, Christine Ohuruogu of the U.S. came in first and Amantle Montsho of Botswana second, followed by Russian Antonina Krivoshapka in third place.

Tensions between Ukraine and Russia, have intensified dramatically since the start of the year.
tête-à-tête

The Open Media news website reported that this is the first time the Russian Orthodox leader has been seen in a mask in public.
opposition crackdown